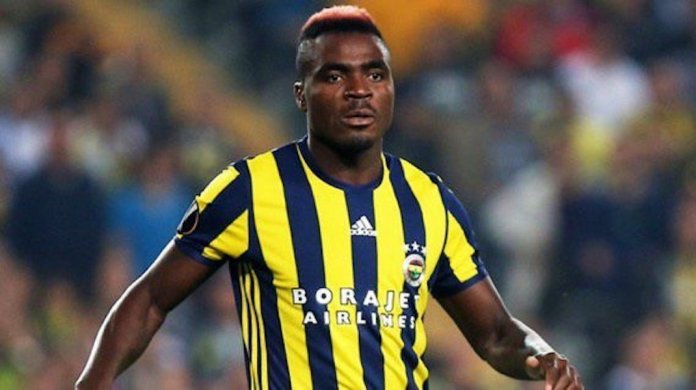 When Emmanuel Emenike joined Belgian First Division B club Westerlo in September as a free agent, he not only saw it as an opportunity to revive his dwindling career, the former Fenerbahce of Turkey striker also set a tall order for himself-to help the club secure promotion to the top-flight. It was however not to be as less than two months after signing he was sacked. Could this be the end of a once-bright football star?

Emmanuel Emenike’s four goals at the 2013 Africa Cup of Nations in South Africa was crucial to Nigeria’s winning the biennial competition for the third time, giving some observers the impression that a striker that would fill the vacuum left by Super Eagles all-time highest goal scorer, Rashidi Yekini, had finally arrived. It was however not to be, as his career nosedived. His involvement in many controversies with his various clubs did not help matters too.

Belgian First Division B club Westerlo last week released Emenike, just two months after he joined the club as a free agent in September. The former West Ham United striker had joined Bob Peeters’ side two months ago with the ambition of helping them secure promotion to the top-flight after having a successful trial.

“Thank you, Westerlo for making me feel at home and welcome. Let’s get some wins and go for the title. Project Promotion,” he had written on his Instagram page minutes after he was signed in September.

According to the club statement, Emenike did not reach the expected level of performance after managing just one start in five league games with no goal to his credit. His short-term contract was to expire at the end of the season but both parties agreed on its termination last Thursday.

“Emmanuel Emenike and KVC Westerlo have decided in mutual agreement to end their collaboration. Despite the many efforts made by both parties in the best understanding, the player could not be brought to the level that both parties had intended,” the statement read.

“In those circumstances, it was appropriate to end the agreement with a good feeling. KVC Westerlo wants to thank Emmanuel for choosing and trusting the club and the player wishes to thank the club for the opportunity he was granted.”

His move to Belgium meant the much-travelled and vastly-experienced Emenike had joined his tenth professional club in nine years, after stints in South Africa, Turkey, Russia, United Arab Emirates, England, Spain and Greece.

Prior to his move to Belgium, the former Nigerian international did not play football in the entire 2018-19 season after suffering an injury last year during his loan spell in the Spanish La Liga with Las Palmas.

Emenike’s first “missionary journey to Turkey” with Fenerbahce was more of controversy than memorable. He was accused of match-fixing, though he was later released without charge.

In his second stint with the Turkish side, he was very unpopular with the club’s supporters largely due to his poor performance, scoring only four goals in 27 appearances. So much so that he once stormed off the field after he was abused by his own fans, culminating in a move to UAE side, Al Ain on loan.

Emenike later joined Greek champions, Olympiakos from Fenerbahce, after signing a two-year deal and a fee said to be about $2.8 million. After struggling with injuries and lack of first-team football, Olympiakos provided him with a platform that includes the European Champions League.

“I know there are big expectations from the fans and club, but I am ready. I’ve joined the most successful club in Greek football and I want to give my best for the team,” the 30-year-old had told BBC Sport.

The former Super Eagles striker was the sixth Nigerian player to sign for Olympiakos of Greece, following in the footsteps of Rashidi Yekini, James Obiorah, Haruna Babangida, Michael Olaitan and Brown Ideye.

Between the summer of 2009 and 2012, the forward averaged over 14 league goals per season with Karabukspor and Spartak. During the 2013-14 campaign, he managed 12 goals in 28 league outings for Fener, but in 2014, despite making only one league outing less, he contributed only four goals.

After a memorable display against Bosnia-Herzegovina at the 2014 World Cup in Brazil, in which he drove down the left flank, leaving defenders in his wake before setting up Osaze Odemwingie’s pivotal winner, Emenike went on 15 international matches without a goal. Late coach Stephen Keshi had to drop Emenike, who previously would have been the first name on the list.

He made 93 appearances in all competitions during his time at Fenerbahce scoring 25 goals.

Emenike came to limelight when he was invited to the national team for a friendly game against Sierra Leone. Thereafter, he was called up to Nigeria’s 23-man squad for the 2013 Africa Cup of Nations and scored in the opening match against Burkina Faso in a 1–1 draw. He also scored the first goal in the quarter-final match between Nigeria and Côte d’Ivoire which Nigeria won 2–1.

He is fondly remembered at Fenerbahce and Spartak Moscow for bullying opposition defence.