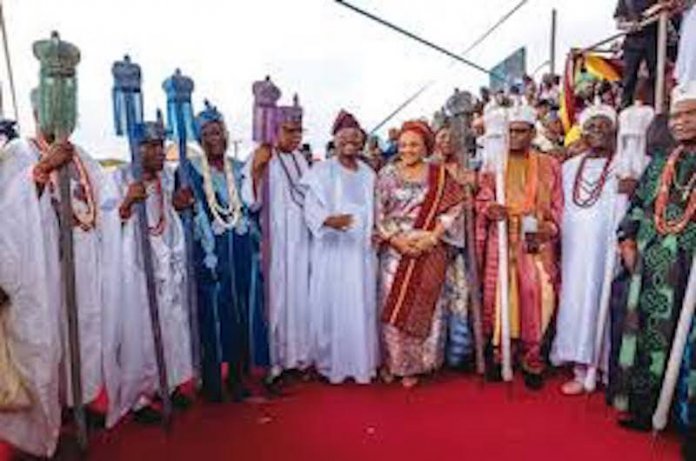 The last might have not been heard on the crisis rocking the Ibadan Traditional Council as the elevated High Chiefs in Ibadanland yesterday kicked against the Tuesday court judgement that stripped them of their crowns, describing the court process as shaving the head of a person in his absence.

The High Chiefs as the direct beneficiaries of the law that promoted them and Baales to Obas on August 27, 2017 said the out of court settlement option which the judgement was premised was without their inputs and there’s no way they could accept such, disclosing that they have briefed their lawyer on the matter.

Justice Aderonke Aderemi of Oyo State High Court in Ibadan had in his judgement asked the Obas to drop their crowns in view of the setting aside of all the gazettes relating to their promotion consequent upon the out of court settlement said to have been agreed upon by the parties in the suit.

In the suit filed by the Osi-Olubadan of Ibadanland and former Oyo State governor, Senator Rashidi Ladoja, it was disclosed that the state government which had appealed the initial judgement of the lower court which earlier nullified the elevation of the Obas had opted out and preferred the matter resolved out of court.

But, at yesterday’s meeting of the Obas at Mapo Hall headed by Otun Olubadan of Ibadanland, High Chief Lekan Balogun, it was stated that the government had no business setting aside the gazettes as such action did not show commitment to governance.

“Those behind the judgement did not consult the interest of Ibadanland. We, as Obas and representatives of the people reject the judgement and we are going to fight it all the through legal and legitimate means. They want to destabilise Ibadanland and we will not allow them,” the Obas said.

They added that the issue at hand was beyond Ibadanland and the conspiracy against the promoted Ibadan Obas, which the judgement could not and should not be allowed against the entire state, which the gazette of 2018 and the latest one captured, stating that they had briefed their lawyer, who would give the next directive according to law.

They reiterated that their rejection of the verdict would not in any way affect their relationship with the Paramount Ruler of Ibadanland, Oba Saliu Adetunji, Aje Ogungunniso 1, who they described as a father. They pledged their respect, unalloyed loyalty and support to Oba Adetunji.

The Obas also said they would be waiting for the Olubadan to convey the Olubadan-in-Council meeting, saying “we are not quarrelling with our father, Oba Adetunji, he should let our meetings go on regularly.”

It would be recalled that when the promotion was effected, Ladoja had filed a suit against Oyo State Governor and the Judicial Commission of Inquiry headed by retired Justice Akintunde Boade that reviewed the declaration in 2017, positing that the review by former governor Abiola Ajimobi was not proper as he (Ajimobi) lacked the right to review the declaration independent of the Olubadan and his High Chiefs.

The lower court then gave verdict in support of Ladoja, but the judgement was appealed by Ajimobi, a case that was recently decided and reverted to the lower court for retrial under a new judge outside Justice Aiki who heard it initially.

However, rather than return to court with the previous case, a new case was entirely filed by Ladoja through which he got the out-of-court settlement court judgment in which Ladoja and the defendants (state government) agreed to shelve the elevation and return to pre-elevation condition.

The gazettes which gave teeth to the elevation were consequently set aside and their rights to wear beaded crown and coronets revoked.