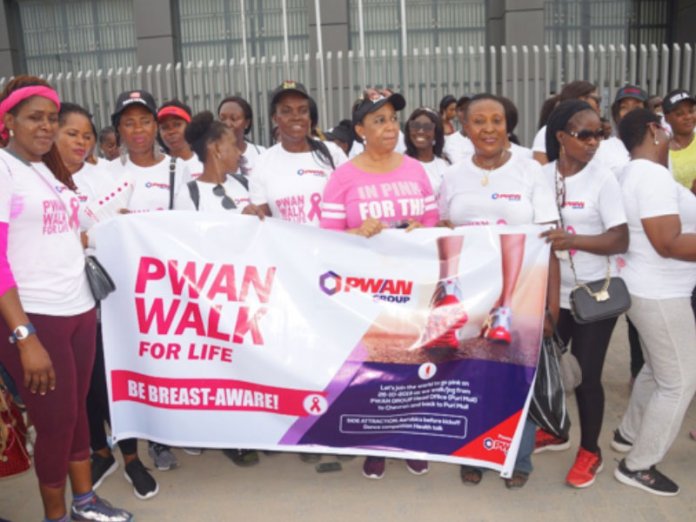 Until Annabel Akpos carved out a niche for herself in the bourgeoning real estate market, she was just one of the numerous and hardly appreciated jobless graduates roaming the streets of Lagos.

Soon as she gained some insight in the property market on the sprawling Lekki axis of Lagos, Akpos began to have a feel of good life. She was smiling to the bank with some millions of naira earned from just selling landed property.

But just then, Breast Cancer struck, and her promising life and career was brought to an abrupt end. “She was unable to detect early enough a lump in her breast which later became her nightmare.” Stella Amayo, a close friend of hers disclosed during a recent lecture in Abuja.

Like Akpos, many Nigerians, Africans and indeed humanity are at high risk of breast cancer devastation and other variations of malignant tumors.
According to the World Health Oganisation (WHO) report, Nigeria has the highest rate of cancer deaths in Africa. “But given requisite education and management, most of this cancer related deaths are avoidable”, said, a Professor of Radiology and Director of Clinical Trials (UNNCECT) University of Nigeria Nsukka, Professor Ifeoma Okoye, while addressing participants at the event in Abuja.

Okoye stressed that “low level of awareness regarding the disease, its courses and prevention among women and men, coupled with health workers not being passionate enough to leave their comfort zones and take the lifesaving messages and screening to the people,” are major reasons for poor prognosis of cancers in our environment.

During the event, Dr. Onwumere and his wife Dr. Jayne were at the vanguard of the entire PWAN family which participated in a session of aerobics and vigorous breast cancer enlightenment campaign.

The procession took off from the Puri-Mall headquarters of PWAN, Okun-Ado, through Ajah, Victoria Garden City (VGC), Ilasan Estate, Ikate up to Lekki Phase 1 Estate.

Throughout the six hours duration of the exercise, the PWAN boss frequently cried out in an emotion laden voice, “PWAN supports breast cancer eradication. We say no to breast cancer devastating our women. That is why we are bringing this life saving message, to all people in our community that early detection, proper management and right habit, is the hope of survival breast Cancer scourge”.

According to him, “that unusual difference between the two breasts, that visible lump, dimpling or indentation in the breast tissue, that redness, scaling or other changes to the skin or nipple that appear abnormal, that changes to your nipple that is newly inverted or pulling in, should be the first signals to get you discussing with health experts and then follow with up treatments.”

In what turned out to be one of PWAN’s numerous community social responsibility (CSR) events, the streets of Lekki became aglow as passersby were caught in rapt attention, digesting the message and asking questions.

Speaking with THISDAY afterwards, a Director of the company, Michael Akhuetie, lamented that, “Cancer is a deadly disease that affects a lot of people. When the good cell of the body stops producing and the body starts producing bad cell resulting to a multitude of bad cells, that health situation can cause cancer.

“It is important for both men and women to get regular checkup so that one can remain health. It is not enough to just keep to yourself. Be sure that everything is intact and if for any reason everything is not alright with you, start treatment as soon as possible.”

The Fitness Coach, Victor Ilorin, who took the group through the aerobics session, noted that health walk is relevant to the effort to keep people from cancer infestation.

According to him, “to keep fit, one need to partake in athletic such as skipping, running, walking, jogging and other physical exercises. Exercise is good for the body so always make out time to exercise; it can also help you to prevent a lot of sicknesses and diseases.”

On why PWAN embarked on the awareness, Mrs. Egwunagu said, “This is all about PWAN group impacting people in our community and beyond, health-wise. We don’t just make money, sell land and create millionaires; we care about the wellbeing of people around us.”