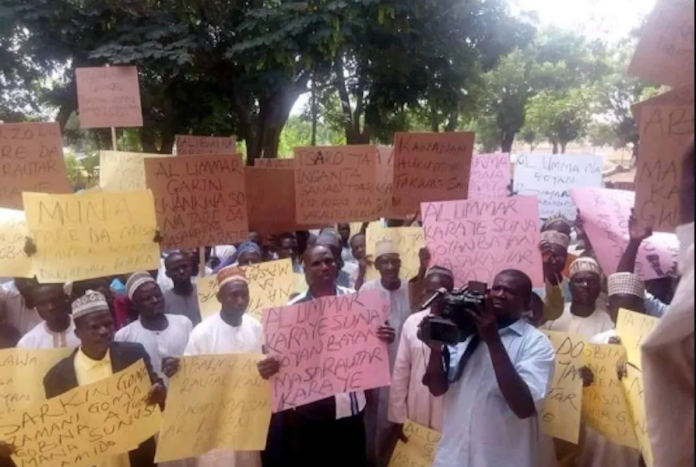 Hundreds of youth across the four emirates dissolved by the Kano state high court on Thursday, staged a peaceful protest against the sacking of four emirates created by Governor Ganduje.

At Karaye emirate, it was gathered that the youths converged on the local government Secretariat along Rogo road and trekked to emir’s palace which is about two kilometres away.

The protesters include women, school boys and angry youths holding placards with imscriptions such as, “We stand by our emirate.’ ‘We stand with emir of Karaye”, among others.

At Bichi emirate also, dozens of youths were sighted at some spots in the town preparing to proceed on protest. Some youth were seen carrying placards around the emirs palace in protest against the Court’s decision.

In Rano emirate, it was the same thing as youths, including women were sighted around the emir’s palace shouting “bamu yadda ba”, meaning, “it is unacceptable” in Hausa parlance.

In Gaya, dozens of youths had staged the protest, as some of them were hanging banners and placards on motorbikes that carry inscriptions that show their displeasure over the decision of the court to sack the emirs.

It was also learnt that security operatives had been deployed in the four emirates in a bid to avert possible breakdown of law and order.

A Kano State High Court on Thursday presided over by Justice Usman Na’abba nullified the creation of the emirates on the grounds that it violated section 101 of the 1999 Constitution (as an amendment).

The suit was filed by the then House of Assembly member, representing Gwarzo Local Government constituency, Rabiu Saleh Gwarzo, challenging the law passed by the Assembly and assented to by Ganduje on May 8, that established the four additional emirates.