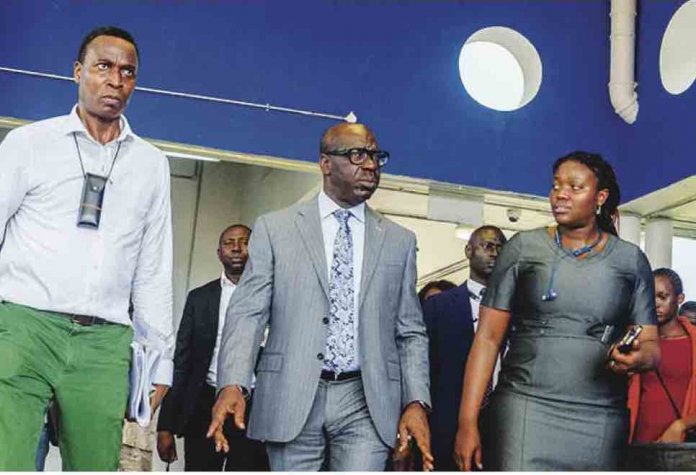 Despite what seem an unending political hullabaloo to outlanders in Edo State, an indubitable facet that has kept the Edo State Governor, Mr. Godwin Obaseki endeared to the people, is how visionary leadership acumen, especially his ability to see, plan and build beyond the present.

This is in addition to his transformational and developmental achievements in the state, which have continued to earn him accolades and recognitions.

Unperturbed by the distractions, the governor in less than three years in office, has not only repositioned Edo State economy to be viable and globally competitive, but has been able to set a pace for future growth and massive industrialisation. While the state’s industrialisation is yet to boom, the governor is already nurturing and training the skilled manpower required for the later hay days.

Imagine a time when Edo State would have attained a degree of large-scale production and manufacturing, summed in advanced technical enterprises and other viable economic activities without a relatively skilled manpower with the technical know-how to sail the ship. The worrying impact is the importation of skilled labour from various parts of the world to drive the course, which ordinarily indigenes should have spearheaded. In exact terms, the yearn for job creation and local content development of the Godwin Obaseki-led administration would have been defeated.

This explains why the governor is leverag- ing on technical education to prepare Edo indigenes for the industrial revolution and technological switch-over that his administra- tion is strategically repositioning the state for. Assiduously, the State Government has wittingly invigorated technical and vocational education with the revamp of the Govern- ment Science and Technical College (GSTC), formerly Benin Technical College.

The project, funded by World Bank, which is as a leading model hub for Technical and Vocation Education and Training (TVET) in Edo State, officially opened its improved facility to students in the 2019/2020 academic session. Several other models are currently still being developed for the state’s TVET programme and will be replicated in other sectors. Already, the new look of the college has caused Edo residents to take interest in the school, causing student enrolment to spike.

The GSTC will serve as a centre for techni- cal skill training for Edo youths ahead of the Obaseki-led administration’s industrial revolution boom. Since 2017 till the date the facility has continuously witnessed massive rehabilitation, with projects still on-going at the college. The school boasts of world-class and up-to-date laboratory and workshop equipment. Expectedly, the college has commenced the production of chairs for other schools in the state. It will produce part of the N2b worth of chairs to be used in primary schools across Edo State.

Applaudably, key infrastructure interventions for the state-of-the-art institution include a dedicated 33kv line from the Benin North electrical sub-station which draws power from the NIPP Ihonvbor/Azura Power complex and a 45mbps fibre optic cable serving the college. Its facility is also networked with a sitewide fibre optic system, backup power from generators, off-grid renewable energy (solar power), rainwater harvesting and an integrated sitewide potable water system. Here, unlike other institutions of learning across the country, electricity is never a cause to ponder. One would begin to wonder the expectations of the Governor Obaseki-led administration of the college’s graduates if not to be equipped with skills and expertise to compete favorably with other industrialised nations.

Interestingly, the state government has concluded plans to establish a commercial production hub in the GSTC. The hub will serve as alocation for design and production of machines so as to create opportunities for students to work with those in the industry and translate what they learn to the real world.

Also, the state government has finalised talks with foreign partners for exchange programmes, which will make provision for experts to train teachers on technical subjects. The government also employed over 104 new staff to strengthen the college’s staff strength for the new session.

Obaseki, during a tour to the school’s facility recently, said: “We need more teachers that can teach technical subjects and we need to train them. We are considering different options as

we are talking to foreign partners to provide technical support and assistance on how to bring people who have done this before to accelerate the training of our teachers.”

Specifically, the National Board for Techni- cal Education (NBTE) hailed the Governor Godwin Obaseki-led administration on the wholistic revamp of the GSTC built over 40 years ago by the Canadian Government, noting that the new learning environment has set a new standard for technical education in the country.

The Deputy Director, NBTE, Mallam Samaila Tanko, when he led an NBTE Accreditation Team to GSTC, in Benin City, for resource inspection/assessment of the structures, curricula, and equipment urged other state governments to borrow a leaf from thetransformational strides of the Obaseki-led administration.

Having completely changed the face and fortunes of the former Benin Technical College, the Governor Godwin Obaseki-led government also instituted the Edo Innovation Hub, a cluster for technology innovators and inventors to strengthen the state’s nascent technology innovation scene. The hub was commissioned on June 14, 2018 by the Vice President, Prof. Yemi Osinbajo and hosts the South-South Innovation Hub, a regional cluster for technology entrepreneurs in the Niger Delta.

Tagged Edo Innovates, it provides a range of beginner, intermediate and advanced train- ing in business and technology innovation, providing youths the opportunity to learn a wide array of employability and entrepreneurial skills. Specifically, some of the offerings at the hub include digital skills, business support services, start-up incubation and business acceleration, mentorship, co-working spaces, and entrepreneurship training.

More than 10,000 youths have been trained at the facility since inception, with not less than a quarter of them being females. Some of the organisations with presence at the hub include Microsoft, Tech4Dev, LinkedIn, Curators University, Hotels.NG, Siemen’s Impact Hub, Makers Academy, Pan Atlantic University’s Enterprise Development Center, among others.

The Hub has recently proven to be a resource center for the state’s government plans to build an internationally competitive locally-trained labour force in partnership with reputable organisations working to mitigate the menace of human trafficking and illegal migration.

This has attracted investment from the World Bank-assisted State Employment and Expenditure for Results project (SEEFOR) Project, United Kingdom (UK) the Market Development in the Niger Delta (MADE), a number of Chinese companies, among others, at the hub.

Amidst others, locally and internationally, who have continued to commend the governor, Edos in Diaspora applauded Obaseki for his relentless effort to spur industrialisation in the state.

Speaking with journalists in Benin City, an indigene of Edo State and Staff Sergeant with the Toronto Police in Canada, Mr. Bassey Osagie, said the Governor Godwin Obaseki- led administration has shown commitment to drive sustainable development in the state.

He said for Nigeria to move forward, there is need for governments across all levels to use public funds to improve livelihood and create avenues to generate wealth, which will discourage people from depending on handouts from the government.

Such initiatives would discourage people from being idle, drive productivity and assist more young people to get jobs and develop the state. I watch him speak and I think we need an intellectual like that to continue to lead our state. We need somebody who is visionary and put Edo project above everything else and exposes whoever that is trying to stop the state from progressing, while working on plans to improve the wellbeing of the people