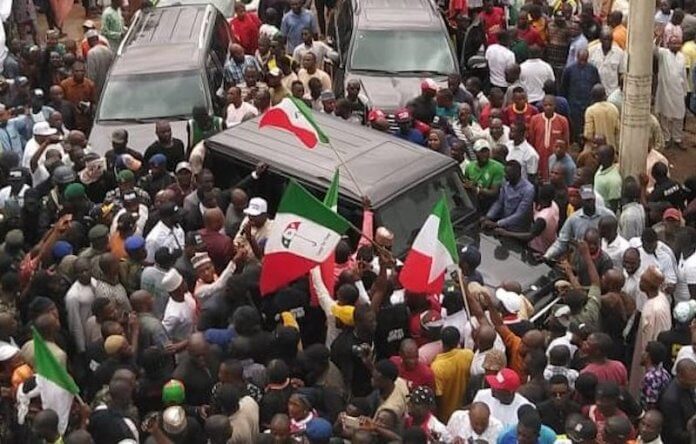 Fresh indications have emerged that apart from the violence unleashed on voters and the opposition parties in Kogi State during last Saturday’s gubernatorial election, internal crisis within the Peoples Democratic Party (PDP) and the possibility of power rotating to Kogi West Senatorial zone in 2023 also contributed to the re-election of the candidate of the All Progressives Congress (APC), Governor Yahaya Bello.

This is coming as a PDP Woman Leader for Wada Aro Campaign Council, Ochadamu Ward, in Ofu Local Government Area, Mrs Acheju Abuh, has been burnt to death in her home by suspected political thugs.

THISDAY gathered that the seed of discord was sowed in the PDP on September 3, after Musa Wada, a younger brother of a former Governor of the state, Captain Idris Wada, emerged the winner of the party’s governorship primaries in the state.

Wada had polled a total of 748 votes to defeat his main opponent, Abubakar Ibrahim, the son of another former Governor of the state, Ibrahim Idris (popularly called Ibro) who polled 710 votes.

Investigation revealed that Ibrahim Idris who was the main financier of PDP in the state felt that his son was cheated out of the governorship ticket.
To worsen the crisis, Abubakar, the second runner up in the PDP primaries, also went to court, asking the court to declare him the winner of the September 3 primaries.
The former governor, it was gathered, was also said to have withdrawn his huge financial support for the main opposition party.

“The former governor felt that despite all his contributions to the party, his son was cheated out of the race. Not only that his son went to court, he also withdrew his financial support and PDP went to the main election to face Yahaya Bello with virtually empty pocket,” a source within Kogi PDP told THISDAY.

THISDAY gathered that though the former governor delivered his local government area, Omola, to the PDP, he did not deploy his enormous resources and contact to ensure the victory of his party in the other parts of the state.

It was also gathered that the victory of Wada in the PDP primaries did not go down well with his brother, Idris Wada.
Investigation revealed that despite the efforts of other family members to reconcile them before the governorship poll, the former governor did not support the aspiration of his younger brother with enough commitment to guarantee victory at the polls.
Also an aggrieved Melaye showed his disaffection with the outcome of the primaries when he rejected his appointment by the PDP as the Director-General of the Kogi State Governorship Campaign Council.

“Let me state categorically that I have turned down the position of Director-General of the PDP Kogi State Governorship Campaign Council. I wish PDP all the best. When truth is a casualty there is chaos. Senator Dino Melaye,” Melaye had tweeted.

THISDAY gathered that apart from the crisis in the PDP, the hope of Kogi West Senatorial zone to possibly have one of its people emerge as governor in 2023 also fuelled support in favour of Bello who has just won a final term of four years.
Investigation showed that the people of Kogi West believed that supporting Wada means waiting for another eight years before it would get to their turn to produce the governor.

A source within the Kogi PDP told THISDAY that the people of the senatorial district did not want to wait for another eight years for it would be their turn.

“Kogi West did not want another candidate that will come and rule for another eight years before it will be their turn. If Musa Wada wins, he will stay for eight years but Yahaya Bello has only four years. So, they opted to go with Bello,” he explained.

Meanwhile, THISDAY learnt that trouble began for the PDP chief when thugs started shooting when they arrived at her house and surrounded it, blocking every escape route.
It was gathered that the suspected hoodlums sprayed the building with petrol and set it ablaze as terriffied villagers watched from far away.

The woman was said to have attempted to escape through a window but was prevented by the metal burglar proof while dodging gunshots fired in her direction.
A source in the village said that “the blood thirsty thugs waited, shooting and watching with relish while Mrs Abuh cried from inside the inferno until her voice died out.”

It was gathered that the hoodlums left only when the entire house and Mrs Abuh had been razed down.
The Kogi State Police Command has confirmed the incident through a statement by the Public Relations Officer, William Aya, a Deputy Superintendent of Police(DSP).

Aya, in the statement entitled “culpable homicide/mischief by fire,” said: “On 18/11/2019 at about 1630hrs, one Musa Ety of Ochadamu, Ofu LGA reported at the station that, at about 1030 of same date, there was a misunderstanding between one Awolu Zekeri aged 35 years member of APC and one Gowon Simeon, a member of PDP both of Ochadamu, in the process Gowon Simeon stabbed Awolu Zekeri with a knife on his lap, he died on his way to the Hospital.

“As a result, angry youths in the area mobilised to the house of one Simeon Abuh of same address who is an uncle to the suspect, set it ablaze, thereby burnt one Salome Abuh, aged 60 years.”

He said three other houses were equally burnt, adding that the body of the deceased has been moved to the University Teaching Hospital Mortuary Anyigba for autopsy.
According to him, the police have drafted personnel to the area to prevent any breakdown of law and order.