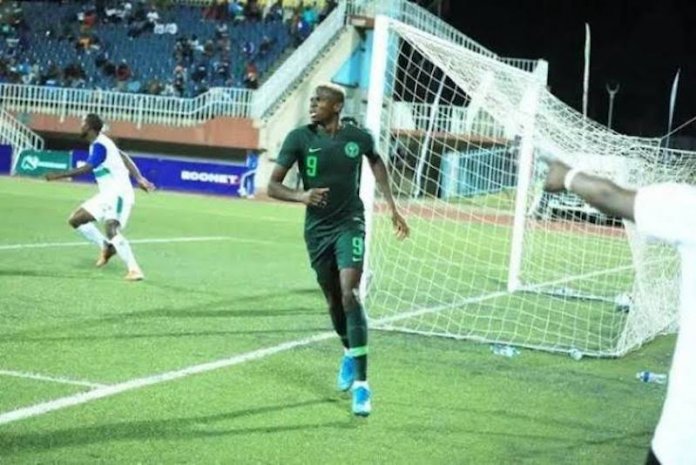 Former Super Eagles forward, Odion Ighalo, has tasked the rave-of-the-moment, Victor Osimhen, to keep improving himself and not get carried away with accolades he is getting so far in his fledging career at top level football.

Ighalo, who ended his international career in July following Super Eagles’ third-place finish at the AFCON 2019 in Egypt where he was awarded the Golden Boot after scoring five goals the in tournament, said the young striker should keep working hard to improve himself.

Following his retirement, Osimhen has taken over the Number 9 shirt and has been in outstanding form to earn the country back-to-back wins in Nigeria’s first two Group L qualifying games for the 2021 Africa Cup of Nations.

The Lille star helped Nigeria turn around a goal deficit against Benin with his equaliser in their 2-1 victory last Wednesday, before putting up a five-star performance in their 4-2 win over Lesotho where he bagged two goals and two assists on Sunday.

In reacting to the latest heroics, Ighalo who had a four-year stint with the three-time African champions has urged the Lille talisman to remain focused and to keep learning.

“I always told him that he has everything it takes to lead this attack, but it all depends on him,” Ighalo told ESPN.

“I told him he has to keep working hard, stay humble and always be ready to learn, and above all not to get carried away with success or hype but just to keep improving.”

Meanwhile, Super Eagles coach, Gernot Rohr, is full of praises for Osimhen’s progress despite his limited playing time when Ighalo was active in the national team.

“I took him already in my first match, remember. Everybody was surprised. He was 17 when I selected him in August 2016,” Rohr said.

“He was in Germany and unlucky with injury, and then he fought very well to come back.

“And now I have very good information on him from Lille. He is progressing, and also I saw him progressing for seven weeks before and during the Afcon. Also, we had Ighalo, so he could not play so much, but then in the last match he did well and he showed all the progress he did.

“He is working well. There is no secret. When you work well and you have the talent and you stay humble, you can succeed and he can even improve because he is still very young.”