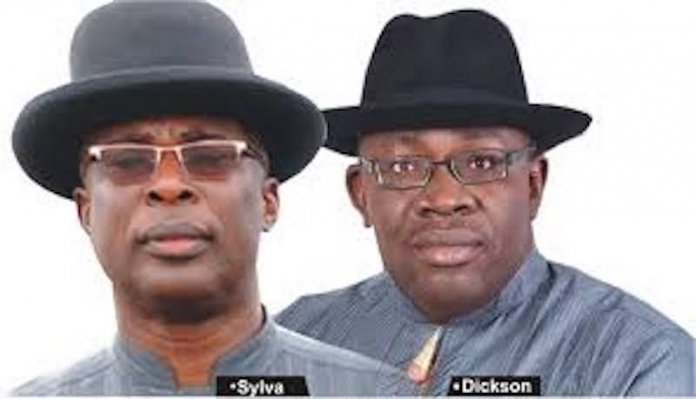 Act One, Scene One!

In every religious teaching, there is a firm belief that in the lives of men, an unseen hand called fate directs their affairs. Success or failure is also largely dependent on the choices we make whether in our daily interactions, in business or in the complex game of politics with all the intrigues and strange alliances that come with it. It is for this reason that it is critical to situate and review the changing political dynamics in Bayelsa State with the defeat of Governor Seriake Dickson’s candidate, Senator Douye Diri, in the just-concluded governorship election in the state.

Former Governor Timipre Sylva’s bet big on President Muhammadu Buhari has paid off big time. His rise and Dickson’s fall is an important lesson for students of power. More so, it underscores how the unseen hand of fate has intertwined the lives of men in the unfolding drama in Bayelsa State – some have lost, others are winning.

Some 20 years ago, a certain Dieprieye Alamieyeseigha was sworn in as the Governor of Bayelsa State, precisely on May 29, 1999. A member of the then ruling Peoples Democratic Party (PDP), he was so popular and huge on the turf that he was fondly referred to as the Governor-general of the Ijaw nation. Elected along with him on the same ticket was a little known Goodluck Jonathan, who thrived in the shadow of the looming Alamieyeseigha.

The 2003 reelection went smoothly for Alamieyeseigha and his deputy before he ran into trouble with the establishment and his political influence started to wane. By September 2005, Alamieyeseigha was detained in London on his way from a medical trip, where he was said to have had a tummy tuck procedure, on charges of money laundering.

At the time of his arrest, Metropolitan Police found about £1m in cash at his London home. Later they reportedly found a total of £1.8m ($3.2m) in cash and bank accounts.

He was found to own four homes in London worth an alleged £10 million. His state’s monthly federal allocation for the last six years that he was in power was said to be in the order of £32 million. Realising what had lain in wait for him, he jumped bail in December 2005, from United Kingdom, allegedly disguising as a woman, although he later denied any such thing.

In the end, Alamieyeseigha was impeached on allegations of corruption on December 9 2005, shortly after returning from London. This naturally opened the door for his deputy, Jonathan, who was sworn in as governor and completed their term.

Jonathan had also sought to run again as governor in 2007 when he locked horns with a relatively unpopular Timipre Sylva, who had just joined the party in 2006 and refused to stand down for him in the party primaries.

But Jonathan won the primary election in a landslide and was gearing up for the 2007 election as governor when he was picked as presidential running mate to the late Umaru Musa Yar’Adua. That, of course, paved the way for the recalcitrant Sylva, who had come second in the primaries to also become the governor of Bayelsa State.

Indeed, Sylva’s political career began in 1992, when he won a seat into the House of Assembly, representing Brass constituency in the old Rivers State. He was at the time the youngest lawmaker in the Assembly. His political career took a positive progression when he was appointed Special Adviser to a former Minister of State for Petroleum, Dr. Edmund Dakouru in 2004.
Thus, he was not all that a new comer, when in 2006, he joined the PDP gubernatorial primaries challenging Jonathan. However, after emerging the PDP candidate, he went on to win the election and succeeded Jonathan, who had also become the Vice President.

Unfortunately for Sylva, his opponent in the 2007 election, Ebitimi Amgbare of the defunct Action Congress (AC), challenged his victory. But whilst the Bayelsa State Election Petitions Tribunal upheld Sylva’s election, Amgbare took the matter to the Appeal Court in Port Harcourt, Rivers State, which overturned the Tribunal’s decision and nullified Sylva’s election on April 15, 2008.

The five justices of the Court of Appeal were unanimous in their decision and ordered that Speaker Werinipre Seibarugo be sworn in to replace Sylva as acting governor, with a new election to be held within 90 days as stated in the Electoral Act.

When a new election was held on May 24, 2008, Sylva was again overwhelmingly elected with 588,204 out of about 598,000 votes and was sworn in. But on January 27, 2012, his tenure was terminated by the Supreme Court, with an acting governor appointed to oversee the state until the election of February 2012, won by Seriake Dickson, another fellow in which Jonathan, who had become president following the passing of Yar’Adua, was pleased.

But Jonathan’s disdain for Sylva manifested crystal clearly, when Sylva moved against him emerging acting president in the wake of Yar’Adua’s sickness. Sylva had openly dismissed the imperative of a written instrument from the president to pave the way for Jonathan. Sylva in other words aligned himself with the then reigning cabal against his own kinsman emerging president. Jonathan never forgave him for such a betrayal.

After Jonathan had emerged substantive president and Sylva with a former governor of Rivers State, Rotimi Amaechi, allegedly went to seek his forgiveness, the former president declined and gave him no chance of returning to the Government House in the state. However, Sylva took care of Patience Jonathan in the form of political patronage while playing hide-and-seek with Jonathan.

Indeed, this laid the foundation for Jonathan’s subsequent defeat in 2015. Amaechi feared retribution that befell Sylva should Jonathan win a second term. So Amaechi and Sylva joined forces with Bukola Saraki and others to solidify Buhari’s candidacy.

Buhari had won and Jonathan had lost. Sylva’s risky bet had paid off. Big risk, big reward. Buhari wasted no time restoring his 48 houses seized by the EFCC very early on in his first term. And he bidded his time to make a comeback. But that Buhari had nominated him as co-chairman of the Transition Council.

Even after the restoration of his houses, he had remained quietly in the background until his recent appointment by President Muhammadu Buhari on Wednesday, August 21, 2019, as the Minister of State, Petroleum. It was time to make his move. He now has the national platform to project power. And with eyes on the big price, renewed his rivalry with Dickson but this time by proxy. His choice of David Lyon was deliberate, first to decimate his rivals within the APC and also take on the menacing opposition.

Interestingly, on the far end of the PDP was a larger-than-life Dickson, who was practically dishing out orders to party leaders on what he wanted and what he did not want. His insistence on Senator Douye Diri as the PDP candidate had pitted other members of the party, including Jonathan, against him who felt Timi Alaibe was better suited to replace him. But he scoffed at the idea. If he thought that by alienating the former president and other important stakeholders was a sure way of emerging as a godfather, he was terribly mistaken as his recalcitrance swelled support for the APC candidate. People in Jonathan’s locality and environs voted massively for the APC candidate.

Things didn’t quite look good for him from inception especially, that his choice of Diri and his deputy, also a senator, was believed to have been conceived to pave the way for Dickson to go to the senate since a bye-election would have been due had his candidates won the election.

But with Jonathan and his wife, Patience, were alleged to have clandestinely thrown their support behind the APC candidate. Lyon. True or false, the outcome of the election was not much of a surprise to close watchers of political developments in the state, a development that has now re-launched Sylva’s political relevance even beyond the borders of Bayelsa State.

The outcome of Saturday’s election was significantly and by all standards, the resurrection of Sylva’s political leadership in the state, even though he might have Jonathan, a former president to contend with at the end of the day as well as Dickson, who might not have given up. How he plays his game from this juncture going forward would determine how long more orchestra would last and how far he could go leveraging his new status in Bayelsa politics. It is important, however, that Sylva doesn’t allow himself to be carried away by this victory. As much as the loss is PDP’s the victory isn’t so much for the APC’s. It is surely a hard message to Dickson. A bitter one at that.

But it is not yet uhuru even as the champagne corks are popping and songs of victory rend the air. There are two pending court cases that may yet scuttle the making of a new godfather. A federal High Court in Yenagoa, Bayelsa had in a judgment barred the APC from participation in the election because of issues of falsification of documents by the deputy governorship candidate and another judgment secured by Senator Heineken Lokpobiri, one of the contestants nullifying the primaries that produced Lyon. These two judgments are yet making their way up in the court system.