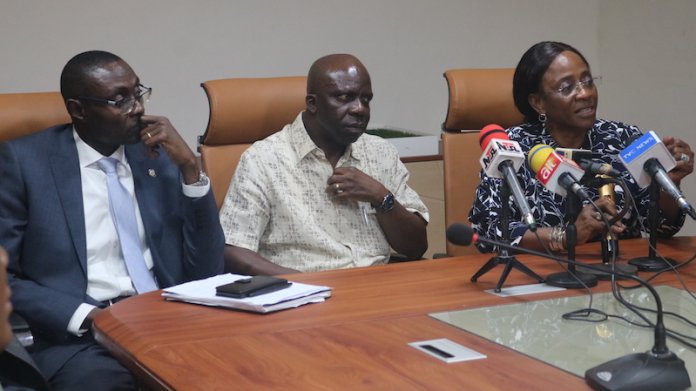 Federal Controller of Works, in Lagos, Engr. Adaramola Kuti has assured Lagosians of the speedy completion of the rehabilitation work on the failed portions on both sides of Eko Bridge. He revealed that work has started at the Apongbon end.

Kuti stated this at a joint press conference he addressed along with the Lagos State governor’s Special Adviser, Works and Infrastructure, Engr. Aramide Adeyoye and the state’s Commissioner for Transportation, Dr. Fredrick Oladeinde. They assured Lagosians that the rehabilitation works on the bridge would end on December 14, 2019 with minimal effect on traffic.

The Lagos State Controller of Works allayed the fear of residents that the Eko Bridge would be shut down as a result of the on -going rehabilitation work, noting that the rehabilitation work was meant to replace the flexible pavement of about 150 meter failed portion with rigid pavement to put the incessant failure of the portions to an end.

Commenting on the video trending on the failure of the third mainland bridge, he dismissed the video as old and urged Lagosians to ignore it. He explained that the bridge was not meant to be static and that is why it has expansion joints will be replaced at the appropriate time. He revealed that all the expansion joints on the Durmerlong Bridge had been replaced and the bridge pavement resurfaced without shutting it down.

The FG, he said had no plan to shut down the 3rd Mainland bridge for rehabilitation before the end of this year, and assured that the bridge was very strong and safe.

“We want to assure Lagosians that the 3rd Mainland Bridge is free, it is safe and we are not unmindful of the pains that Lagosians are currently going through with the rehabilitation works going on Lagos/ Ibadan Exp. Way and Lagos-Badgry Expressway. So, there is no way we will close the 3rd Mainland bridge at this critical period,” he said.

On the Lagos-Ibadan Expressway, the Federal Controller of Works disclosed that the construction work on the Kara to Berger portion of the road would be completed and that the entire bridge would be reopened to traffic on December 15 this year, regretting that heavy downpours this year slowed down the pace of work on the ever busy expressway.

He said, “Though the rains did not allow us to work at a planned speed, but once we finish the construction work inbound Lagos from Kara, we will not close the other end of the road as planned before, we will open both sides of the road by December 15 this year so that people can enjoy free flow of traffic especially, during the yuletide, we will resume work on the other side in January.”

The Commissioner for Transportation, Dr. Fredrick Oladeinde, urged road users to obey traffic rules, as officials of the Lagos State Traffic Management Authority, LASTMA, Special Task Force and other security agencies have been mobilised to enforce the law.

Special Adviser, Works and Infrastrure, Engr. Aramide Adeyoye said the whole of Lagos State would soon become one huge construction yard, as the state was set to battle the road challenges, now that the rain seems to be abating.