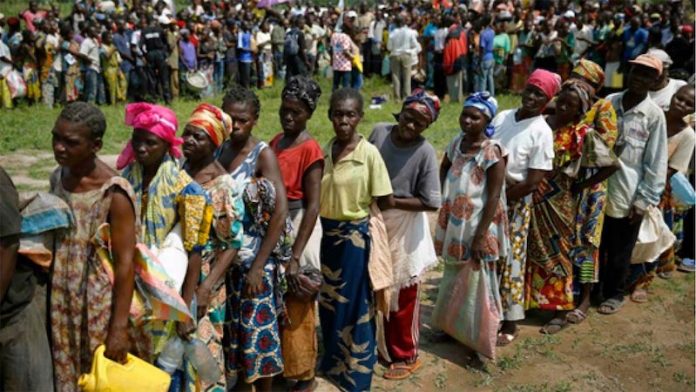 The International Displacement Monitoring Centre (IDMC) said weekend that the federal government and the international community have so far expended N1.2 trillion on Internally Displaced Persons (IDPs) in the North-east.

The Norwegian-based centre said the amount was spent on health, housing and livelihoods of displaced persons.

This is coming as Nigerian troops mounted sustained onslaught against terrorist groups, Boko Haram and the Islamic State for West African Province (ISWAP) and rescued an octogenarian, three children and women from insurgents.

The month-long FPCAGE Course 9/2019, is being conducted by a team of Royal Air Force (RAF) Regiment instructors at the Regiment Training Centre (RTC), NAF Base, Kaduna.

The 2019 Internal Displacement Monitoring Centre (IDMC) report said N1.2 trillion was expended by the federal and state governments of Borno, Yobe and Adamawa as well as the international community on IDPs between January 2014 and December 2018.

“The highest financial burdens come from the impacts of internal displacement on health, housing and livelihoods of displaced persons,” it said      .

The IDMC said on its website that the costs and losses associated with security and education were secondary but still significant.

The report said the figures assessed the cost and losses

associated with internal displacement and most direct consequences on health, shelter, education, security and livelihoods.

of internal displacement nor costs and losses incurred by host communities or other affected groups.

“They should therefore be considered as underestimates of the actual economic impact of internal displacements,” it said.

On displacement impacts’ implications the report said: “they compare the financial risk posed by internal displacement on national economies with affected government’s ability to cope with it.These different measures all point to the repercussion of not

accounting for all IDPs in development and humanitarian plans.”

The report further stated that the situation would lead to “likely regress on Sustainable Development Goals (SDGs) and other global commitments”.

Meanwhile, the Nigerian Army has sustained the tempo of the ongoing counter insurgency operations in the North-east as it dislodged insurgents and rescued women and children.

An update on the war against insurgency made available by the Nigerian Army Operations Media Coordinator, Col Aminu Iliyasu, said troops of 26 Task Force Brigade embarked on a clearance patrol in Dalu village within the Mandara Mountains in Gwoza Local Government Area of Borno State following credible intelligence report on the presence of some of the insurgents in the area.

He said following the confirmation of the presence of insurgents in the area, troops engaged the terrorists and subdued them by deploying superior fire power during the ensuing fire-fight.

“Subsequently, the troops proceeded to thoroughly clear the village of the presence of the criminal insurgents.

“The clearance operation yielded good dividends as the troops found and rescued an octogenarian, three women and four children hitherto held captives by the criminal insurgents”.

He said “the rescued victims were promptly evacuated and children among them were equally administered with polio vaccination by a Nigerian Army medical team.

“Interestingly, no causality was recorded by own troops during the commando operations. However, many of the Boko Haram criminal elements were observed to have fled in disarray towards the summit of Mandara Mountains with gunshot wounds”.

The update said the Chief of Army Staff (COAS), Lt. General Tukur Buratai, reassured the general public of the resolve of the Nigerian Army to continue to execute its constitutional mandate professionally and responsively for a better secured Nigeria.

“He also thanks all well-meaning Nigerians for their continued support, goodwill and understanding towards officers and men of the Nigerian Army as they sustain the conduct of various operations and routine exercises nationwide.

A NAF statement said the course was aimed at building additional capacity to ensure the protection of NAF bases and assets as well as other critical national aviation-related facilities, like airports, with a view to further bridging the gap between air power projection and air power protection.

“While undertaking an assessment of the ongoing training, the Air Officer Commanding Ground Training Command (AOC GTC), Air Vice Marshal Idi Amin, who was received by the Commandant RTC, Group Captain Isaac Subi, expressed satisfaction with the progress of the training and urged the participants to make the most use of the opportunity given to them for being selected for the course.

“He emphasised that, upon completing the course on December 6, 2019, they would be expected to add significant value to ongoing internal security operations across the country”, it said.