These, according to him, are the lifeblood of decision-making in the country.

He said monitoring and evaluation of effective policies of government would become almost impossible, without high-quality data which provide the right information on the right things at the right time.

Speaking at the opening of a high-level dialogue and signing of the Sustainable Development Goals (SDGs) data bond and responsibility framework between the ministries, departments and agencies of government (MDAs), he said the agreement had again demonstrated the commitment and seriousness of the country to its responsibilities and role under the 2030 SDG agenda.

He said the ceremony represented an important part of mainstreaming the monitoring and reporting process of the SDGs in Nigeria and serves as an advocacy affair for the SDG agenda, which, “is a universal call to action to end poverty, protect the environment and ensure that all people enjoy peace and prosperity by the year 2030.”

Kale, noted that the SDGs’ strong emphasis on monitoring and reporting set it apart from the implementation of the Millennium Development Goals (MDGs).

He said the realisation that the success of the SDGs was, “greatly enhanced by a system of monitoring and tracking, highlighting critical areas requiring more attention and resources, or less as the case may be, is certainly one of the strengths of the SDGs over the MDGs.”

According to the NBS boss, the underlying concept of the data bond and responsibility framework aimed to identify mandates, potential roles of MDAs and commit them to supplying those indicators under the SDGs; thereby creating an opportunity and environment for meaningful progress.

He said the framework was significant to the SDG monitoring and reporting process, as well as to the statistical system in the country and charged the MDAs to do all that is possible to ensure that “you put in place, a responsive and credible mechanism for documenting and supplying information in a timely and efficient manner.”

Also speaking at the occasion, the Senior Special Assistant to the President on SDGs, Princess Adejoke Orelope-Adefulire, said her office would leave no stone unturned in ensuring that the country moves on the path of getting it right through the installation of the necessary infrastructure for sustained data production to support the monitoring and tracking of the implementation of the SDGs.

She noted that the government recently launched the Nigeria Integrated Sustainable Development Goals (iSDG) Simulation Model – which is a home-grown analytical tool that would be used going forward to guide SDG-based national and sub-national planning, adding that the iSDG model would rely on credible and robust data to be an effective planning tool.

She described statistics as, “the lens through which the government can be assessed objectively and remain transparent and accountable to the people.”

According to her, it was the statutory responsibility of all the relevant MDAs to provide government with comprehensive, reliable and timely data that would help in formulating policies as well as monitoring and evaluating key programmes and projects.

The presidential aide also tasked all relevant stakeholders redouble their efforts in the production and usage of high-quality official statistics.

Continuing, Kale, nevertheless, said: “Technology is changing the way in which we live our lives. New technologies are leading to a big expansion in the volume, sources and types of data available, creating exceptional possibilities for informing and transforming society and protecting the environment.

“This new world of data is one in which data is bigger, faster and more detailed than ever before. This has also led to a bigger and growing demand for data.

“Our primary role as official data producers is increasingly being contested by these new emerging sources.

“We, therefore, cannot sit or rest on our oars, we must develop our capacities to understand and apply these new data and technologies. Doing this will ensure that we remain relevant, and that the essential principles of good statistics are maintained in the new environment.”

The Lagos State Governor, Mr. Babajide Olusola Sanwo-Olu has charged the Nigeria Communications Commission (NCC), to leverage the provisions of African Continental Free Trade Area (AfCFTA) to the advantage of opportunities in the continent’s telecoms industry.

This, according to him, would be one of the major factor that would fully drive the digital revolution in the country.

He said this during a two-day sensitisation workshop on the AfCFTA initiative for the Nigeria Communications Industry, held in Lagos at the weekend.

The governor who was represented by the Commissioner for Science and Technology, Mr. Hafeez Popoola, said: “AfCFTA as we all know, is an initiative of the Africa Union with the main objective of creating a single continental market for goods and services, as well as facilitating free movement of investment and people across the entire African continent.

“AfCFTA provides the opportunity for Africa to create the world’s largest free trade area, which is also a new hope for boosting intra-Africa trade across African countries with a huge population of the people.”

He said the trade agreement would mark a new dawn for Africa’s economic transformation, stressing that Nigeria’s economy stood to benefit with the creation of the single market.

The governor noted that it was important for Nigerians to know that the anticipated benefits would only remain a mirage if, “we fail as a country to prepare adequately by repositioning the key sectors of our economy to be competitive and able to take optimum advantage of the opportunities presented by new market.”

“A lot of efforts must be put into improving the efficiency of service delivery through investment in modern technology.

“Effective communication network is a key facilitator of trade and economic activities. To enhance the sector’s competitiveness in emerging single market.

“lt is against this premise that this sensitisation workshop themed: ‘Improving Nigerian Communications Industry Competitiveness for the African Continental Free Trade Area Initiative’ is quite timely and relevant,” the governor said.

In his opening remarks, the Executive Vice Chairman and Chief Executive of NCC, Professor Umar Garba Danbatta, stated that the business algorithm would witness changes due to the continent’s single market agenda with the AfCFTA agreement.

Danbatta said the continental pact would become the largest trading bloc in the world in terms of participating countries since the creation of the World Trade Organisation(WTO).

According to him, “AfCFTA is an initiative of the Africa Union with the main objective of creating a single continental market for goods and services, in addition to facilitating free movement of investment and people across the entire African continent.

“It is also estimated that implementing AfCFTA will lead to about 60 per cent boost in intra-African trade by 2022. This is instructive considering the fact that only 16 per cent of international trade by African countries takes place between African countries, according a study by the African Development Bank in 2014.

“Having attained the milestone of ratification of the AfCFTA agreement by 22 member states, it is now the largest trading bloc in the world in terms of participating countries, since the creation of the WTO,” Danbatta said.

He stated that the federal government’s efforts at advancing the country’s economic development was synonymous with the commision’s mandate, adding that the commission would seek better collaborative talks with stakeholders for a milestone achievement. 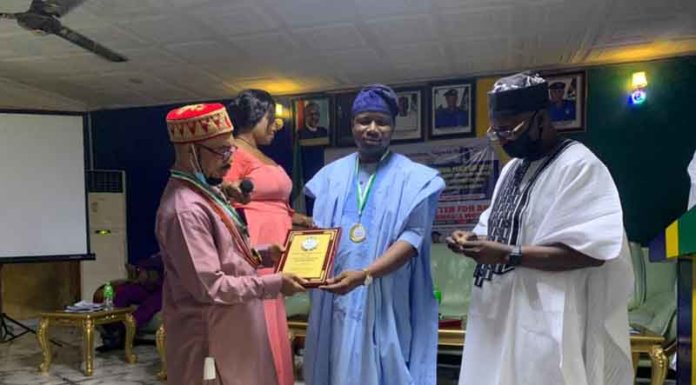