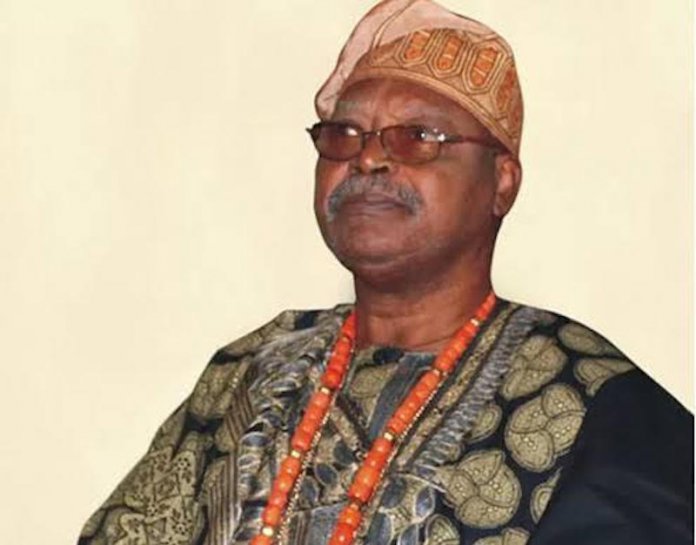 Former Minister of Information, Alex Akinyele, has died at the age of 81. He reportedly died in the early hours of yesterday.

His son, Constantine Akinyele who broke the news, said the former minister died on Thursday night after a brief illness.

Akinyele held several positions including Chairman of the National Sports Commission, first spokesman of the Nigeria Customs Service and Secretary General of and later, President, Nigerian Institute of Public Relations among others.

He studied English Language at the University of Ife (now Obafemi Awolowo University).

Vice Presidential Candidate of the Peoples Democratic Party (PDP) in the 2019 election, Mr. Peter Obi described the death of Prince Alex Akinyele  as a great loss to the country. Describing him as patriot, he encouraged Nigerians to imitate his sacrifices and embrace only those things that will encourage a just and equitable country.

Reacting to the demise, All Progressives Congress (APC) National Leader, and former Governor of Lagos State, Asiwaju Bola Ahmed Tinubu, commiserated with the family and professional colleagues of Chief Akinyele.

In a condolence message released yesterday in Abuja by his Media Office, the APC leader said the late minister was as an elder statesman who contributed immensely to Nigeria’s development and would be deeply missed by the country he served to the best of his abilities.

“Chief Alex Akinyele was an elder statesman. He served the country to the best of his abilities. He did his best as Minister of Information and later Chairman of the National Sports Commission.

“He was also one leader who was very proud of his Yoruba, indeed Ondo heritage, and demonstrated this often in his appearance and conduct.

“Chief Akinyele radiated warmth and tenderness. To meet him is to like him. He was full of life. He was unmistakable with his sartorial elegance. The country he did his best for will sorely miss him.

“My thoughts are with his family, friends and relations at this moment. May they find the strength to live through his passing. I mourn with his professional colleagues, the Public Relations practitioners and members of the Nigeria Institute of Public Relations.

“My condolences also go to Governor Oluwarotimi Akeredolu and the government and people of Ondo State.

“May the soul of Chief Akinyele find eternal rest in the bosom of the Lord,” Tinibu wrote.

Also, Minister of Information and Culture, Alhaji Lai  Mohammed, expressed deep shock and sadness over the death of Akinyele.

Alhaji Mohammed in a statement described the death of Chief Akinyele as a monumental loss to his family, the people of Ondo State and Nigerians in general.

The minister described the late Chief Akinyele, to whom he was well acquainted in his lifetime especially in the realms of public relations, as an astute administrator and a highly-respected public relations practitioner.

He said Chief Akinyele’s tenure as Minister of Information, and later as the Chairman of the National Sports Commission, was characterised by his uncommon passion for Nigeria as well as his impressive erudition.

Mohammed said the family of the deceased, as well as his friends and associates, should be comforted by his legacy of service to humanity.

He prayed to God for the repose of Chief Akinyele’s soul as well as for strength and comfort for his family.