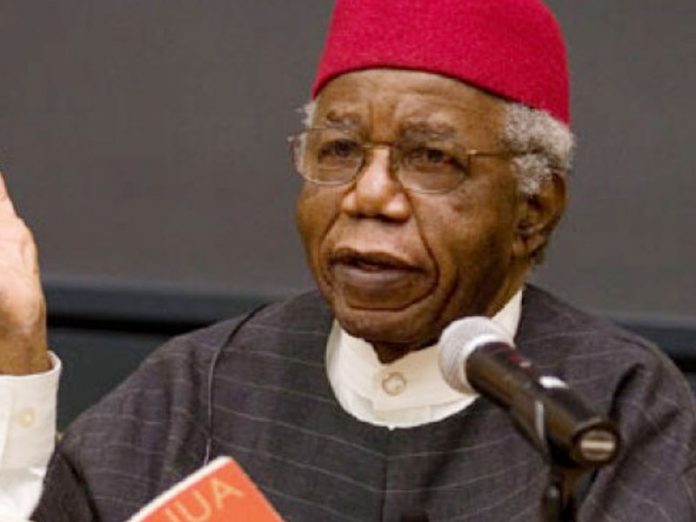 It is well-nigh impossible for November 16 to go by without much of the world remembering that the date is the birthday of Chinua Achebe. It needs stressing that Achebe is arguably the most influential novelist who ever drew breath all over the world. The argument pitches him in the ranks of Cervantes, author of Don Quixote, James Joyce who wrote Ulysses, Franz Kafka who penned The Trial, Gabriel Garcia Marquez of One Hundred Years of Solitude fame, etc.

Things Fall Apart by Chinua Achebe is a supreme classic. Achebe’s oeuvre is indeed intimidating starting from the legendary Things Fall Apart in 1958 and grandly lapping all the way through No Longer at Ease, Arrow of God, A Man of the People, Anthills of the Savannah, Girls at War and Other Stories, Beware Soul Brother, Morning Yet on Creation Day, The Trouble with Nigeria, Chike and the River, Home and Exile, Hopes and Impediments, The Education of a British-Protected Child, There Was A Country, etc.

Born in Ogidi in present-day Anambra State on November 16, 1930, Chinua Achebe who was baptized as Albert was indeed a child prodigy from the very beginning such that his academic feats was known far and wide culminating to his lifelong buddy Christian Chike Momah, alias Papa Ada, confessing that he and his mates were warned early in life that one Albert Achebe from Ogidi would send them to the cleaners in the regional school exams!

It was therefore no wonder that Achebe was early in life given this nickname: Dictionary. He passed his school certificate exams at the top of the class with five distinctions and one credit, and the one credit was paradoxically in literature that would eventually earn him worldwide fame. In the nationwide examination for entry into the University College, Ibadan which had just been established Achebe came first or second in the entire country and thus won a major scholarship. His alma mater Government College, Umuahia was so proud of his achievement that they put up a big sign that stayed on the wall for many years.

At barely 28 years of age Chinua Achebe published the novel Things Fall Apart in 1958, and it has in its 55 or so years of existence proven to be the single most important piece of literature out of Africa. The 50th anniversary of the 200-odd page novel was celebrated all over the world with festivals, readings, symposia, concerts, etc. The novel which has been likened to epic Greek tragedies has been translated to 50 languages and has sold over 10 million copies. It is taught not just in literature classes but in history and anthropology departments in colleges and universities across the globe. The archetypal theme of the meeting of the white world and the black race makes Things Fall Apart an epochal event in the annals of world literature.

The book works at several levels, and can be read at any age from 10 to 100. As a child one can enjoy the incidents such as the match with Amalinze the Cat, Unoka’s dismissal of his creditor, Okonkwo’s attempted shooting of one of his wives, the visitation of the masked spirits, etc. Later in life the many ironies in the book come into play such as the joke on the District Commissioner thinking that Okonkwo’s story can only end up as a paragraph in his planned book, The Pacification of the Primitive Tribes of the Lower Niger, without knowing that one Chinua Achebe had taken the thunder from him by giving Okonkwo an entire book in which the story is narrated from inside!

It is not for nothing that Achebe is celebrated as the father of African literature. He has changed the perspective of world literature from the gaudy picture of Africa as painted by Europeans such as Joseph Conrad, Joyce Cary and Sir Rider Haggard to the authentic telling of the tale by the Africans. Unlike earlier African writers like Guinea’s Camara Laye, author of The African Child, who painted a romantic picture of the continent, Achebe is relentlessly objective in his narration, telling it as it is, warts and all.

It is because of the remarkable success of Things Fall Apart that the publishers Heinemann UK launched the African Writers Series (AWS) in 1962 with Achebe’s first novel as the first title. For many years Achebe served as a non-remunerated Editorial Adviser of the series in which the majority of African writers got their breakthrough in publishing. Things Fall Apart reputedly accounted for 80 per cent of the entire revenue of the AWS.

Former American President Jimmy Carter numbers Achebe as one of his favourite writers. The rave reviews for Achebe’s most famous novel have somewhat dwarfed his other novels such as No Longer at Ease (1960), Arrow of God (1964), A Man of the People (1966) and Anthills of the Savannah (1987). Achebe won the Man Booker Prize for his lifetime achievement in fiction writing, beating a formidable shortlist that included Philip Roth, Salman Rushdie, V.S. Naipaul, Ian McEwan, etc. He equally won, as the first African, the American National Arts Club Medal of Honour for Literature in November 2007.

Things Fall Apart has earned its uncommon distinction as a modern classic and was in 1992 adopted into the esteemed Everyman’s Library of world classics. The Igbo world of the late 19th and early 20th centuries which Achebe limned in Things Fall Apart has become the global picture of Africa writ large. At the turn of the 20th century the book was voted as Africa’s “novel of the century”. Achebe has in the book given the world a new English language which paradoxically portrays African life without facetiousness or affectation. He lays bare the brute masculinity of the age without bending the knee to latter-day political correctness or gender balance.

The truth happens to be Achebe’s sublime weapon in telling the immortal African story.