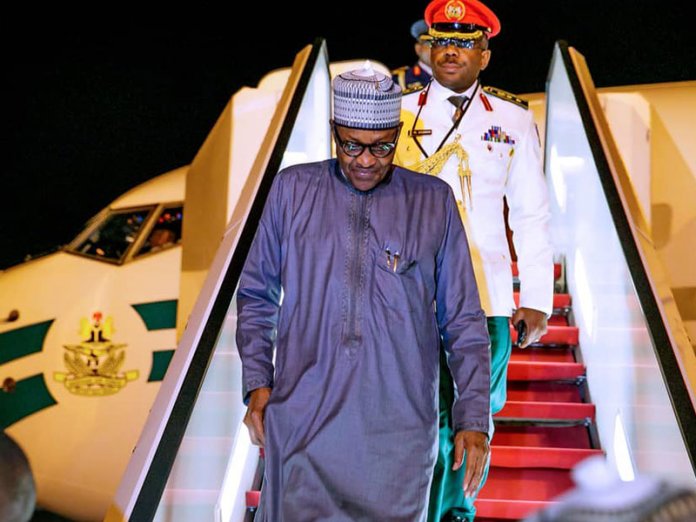 President Muhammadu Buhari has cut short his two-week private visit to London by two days as he arrived the Presidential Wing of the Nnamdi Azikiwe International Airport Abuja on Friday evening.

The News Agency of Nigeria (NAN) reports that the president, who was on official visit to Saudi Arabia before the commencement of the private visit to London on Nov. 2, was initially scheduled to return to Nigeria on Nov. 17.

NAN observed that the Nigerian leader was far away in Saudi Arabia when the Supreme Court on Oct. 30, dismissed the appeal by the Peoples Democratic Party and its presidential candidate, Atiku Abubakar challenging his victory at the Feb. 23 presidential poll.

NAN also reports that President Buhari returned to Abuja on the day the apex court ruled that he was “eminently qualified” to contest the Feb. 23 presidential election.

The full judgment delivered on Friday provided explanations for the apex court’s summary decision of Oct. 30, which dismissed the PDP’s appeal.

In the full judgment, the Supreme Court affirmed the decision of the Presidential Election Petition Tribunal which held that Buhari possessed the requisite educational qualification to contest the poll.

NAN further reports that the presidential aircraft conveying the Nigerian leader and few of his aides landed at the airport at about 9.40p.m, with the temperature out at 26 degrees centigrade.

The President had on Nov. 10 met with his long time friend, the Archbishop of Canterbury, the Most Rev. Justin Welby, at the Lambeth Palace, London.

The two last met in Oct. 2018, when Welby was in Abuja as a keynote speaker at a conference on religious harmony, shortly before the conduct of the 2019 general elections in Nigeria.

The Nigerian leader also on Wednesday in London, met with the management of Pearson Educational Group.