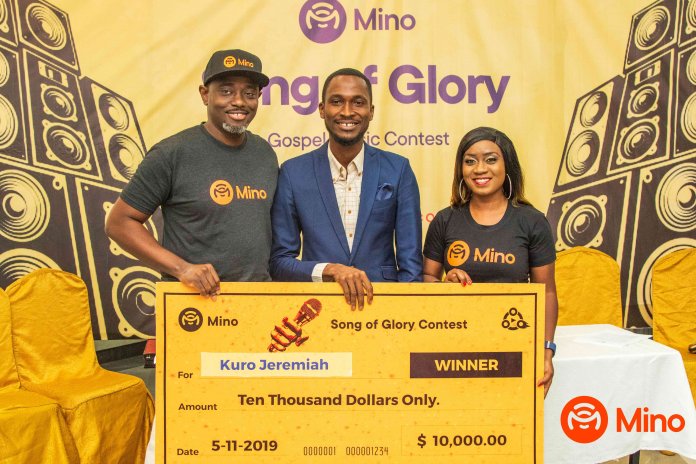 Winners of the Mino Music online gospel music contest ‘Song of Glory’ were presented with their cash prizes recently. The winners emerged from a large pool of gospel artistes from Nigeria and other parts of Africa who submitted their works for a chance in the spotlight.

Each of the winners expressed delight and gratitude to have won in the contest having gone through different circumstances to achieve their dreams. For instance, Jerimiah was once disappointed by a family friend who had earlier promised to sponsor his music.  With the monies won, Jeremiah is keen on turning his gospel music around.

Solely sponsored by Mino Music, the rebranded streaming platform formerly known as Mynotjustok, the online music contest revealed the great potentials that abound in the industry as well as exposed the limitations that most of the artistes faced.

According to gospel artiste Nikki Laoye who also took part in the selection process of the contest, the music industry has immensely changed since she entered the scene 13 years ago.

“The truth is that there is segregation in the industry today. When I released my song in 2006, radio stations used to play our music. There was no segregation. Even at the time  BET came to Nigeria for the first time, they interviewed mostly gospel artistes. Down the line, I think some people came in and relegated gospel music.”

She further pointed out that some of the challenges gospel artistes face today is poor funding. She challenged the winners to be relentless in their passion and ensure they build and maintain good relationships with radio hosts.

“You will need for them to remember you and always show gratitude when your song is played.”

For the founder of the musical platform, Adekola Ogundele, one of the reasons they decided to have a gospel music contest was the low recognition given to artistes in that industry.

“We decided that the gospel industry needs our support, that’s why we kicked off with the contest.”

He also hinted that there are plans to support the winners by linking them to platforms where they can monetise their music, particularly at a time where music is global.