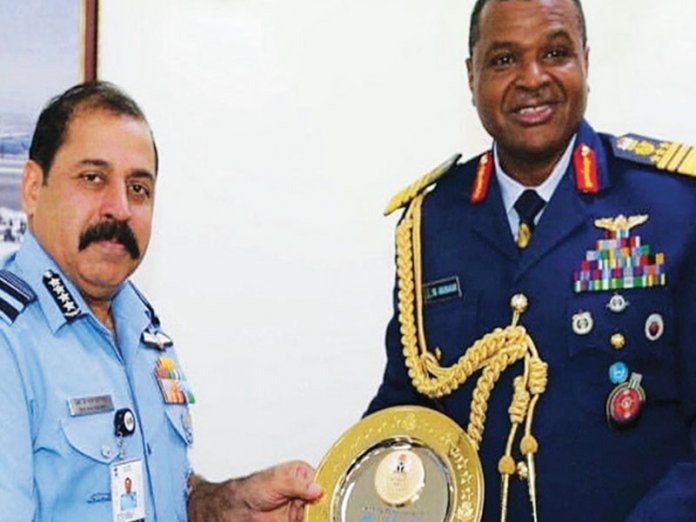 The Chief of the Air Staff (CAS), Air Marshal Sadique Abubakar, has led a delegation of senior Nigerian Air Force (NAF) officers on a visit to India to seek for avenues to strengthen strategic partnerships.

This partnership is in the area of capacity building and Research and Development (R&D) with a view to further boost NAF’s operational effectiveness in the fight against insurgency and other forms of criminality in the country.

According to NAF Director of Public Relations and Information, Air Commodore Ibikunle Daramola, the visit, which held from November 11 to 14, 2019, is at the instance of the Indian Government through an invitation extended by the CAS of the Indian Air Force (IAF), Air Chief Marshal Rakesh Singh Bhadauria.

While in India, Air Marshal Abubakar, who already paid formal courtesy calls on the IAF CAS and the Deputy Chief of the Indian Army, held several other high level meetings as well as visited some IAF Bases and facilities in the country.

The CAS was received on arrival in Delhi, the Indian capital, by a delegation from IAF and the Defence Adviser (DA) at Nigeria’s High Commission, Navy Commodore Olusegun Fereira, as well as the DAs of Senegal, Niger Republic, Ghana and Egypt.

Those accompanying the CAS on the visit include the Chief of Training and Operations Headquarters (HQ) NAF, Air Vice Marshal (AVM) Oladayo Amao, and the Chief of Logistics HQ NAF, AVM Mohammed Yakubu, among others.