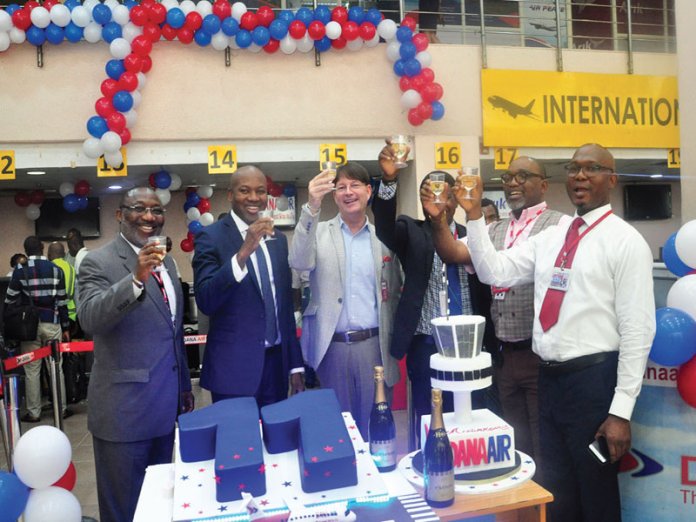 Ten years is very important in Nigeria’s aviation industry. This is because many airlines that existed in Nigeria last for that period of time or less. Some of them include Chanchangi Airlines, Discovery, Bellview, Triax, Okada, Oriental, IRS, Albarka Airlines etc. So, 10 years has become proverbial for the nation’s aviation sector.

There are indications that the jinx would be broken. Arik Air literally hit its toe on a stone after 10 years, when the Asset Management Corporation of Nigeria (AMCON) took over the company in February 2017. Aero Contractors also faced similar challenge after about 10 years of scheduled flight operation, but the airline rejuvenated and today is a beckon of hope for Nigerian carriers. Its maintenance facility has provided succor to domestic airlines.
This background reinforces the need to celebrate Dana Air, which marked 11th anniversary of its flight operations last Sunday.

Mbanuzuo said when it marked its 10th anniversary, “We feel good. We know some other airlines did not get up to five; some didn’t even get up to three; so it is a huge achievement that we have recorded 10 years operating in Nigeria.
“We are about the third airline to clock 10 years. I must say that the system is harsh for scheduled airline operation so we should be congratulated for being able to brave the storm and remain in operation.”

But while speaking on the 11th anniversary on Sunday in Lagos, Mbanuzuo said the airline would never have made it this far but for its loyal customers and staff who believed in what the airline stood for and have kept it going, hence the reward and celebration with customers

He stressed that Dana Air coming this far as a domestic airline in Nigeria has not been rosy as the airline has suffered among other issues incessant peddling of fake news about its operations, but for the resolve and renewed passion of its staff and loyal customers who have kept faith with the airline, by consistently flying knowing full well that the airline has built a strong safety reputation in the last few years.

“For us 11 years means we are doing the right things and making the right decisions at the right time. We have been methodical, careful and realistic in our steps and we hope to consolidate our existing routes to provide full capacity, seamless travel and options for our guests to travel conveniently yuletide while still reviewing our route expansion plans.

“So many airlines have come and gone maybe due to some incidents in the past or inability to cope with the operating environment but we have been here for 11 years and still counting because of our loyal customers, dedicated staff strength and above all a sound management team with a massive experience in the Nigerian aviation industry running the airline with a model worthy of emulation,” it added.

Mbanuzuo thanked the present administration led by President Muhammed Buhari, “for gradually creating the ambience for airlines to thrive and the efforts so the area of infrastructure is commendable. We hope that these efforts are sustained in the coming years and other areas hampering the growth of airlines reviewed.”

“For us, it has been about commitment, promise and fulfillment and we are delighted to have kept the promise we made to our guest last year about fleet expansion and capacity with the recent acquisition of two new Boeing 737 aircraft bringing the number of aircraft in our fleet to nine. Our guests should expect more as our commitment and promise has not changed.”

The airline said it has made huge progress and, “our recent acquisition means more jobs for our Nigerian pilots and engineers. In keeping steadily to our robust route and fleet expansion program, we would create more job opportunities in addition to the thousands of direct and indirect jobs already created, train more and improve capacity in Nigeria.”

Mbanuzuo, noted also that it has also been 11 years of contributing immensely to the growth of the Nigerian economy and the well-being of Nigerians with the airline’s over nine years partnership with the Nigerian Economic Summit Group and project pink Blue, a cancer fighting nongovernmental organisation to conduct nationwide awareness about breast / prostate cancer and sponsoring free screening across the country with over 27,000 positively impacted.