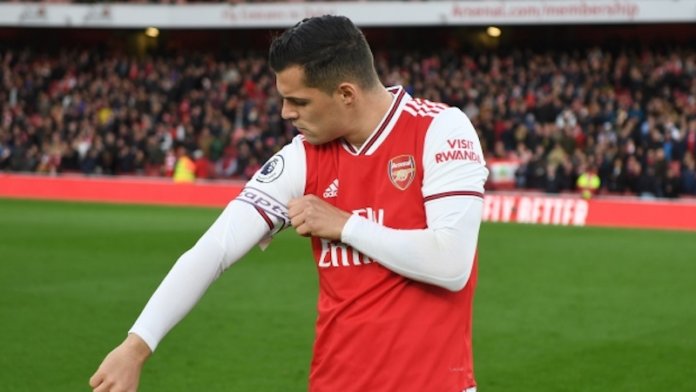 Granit Xhaka has said that he has been hurt by the “extreme hostility” directed towards him from Arsenal supporters, but has promised to prove his worth.

Xhaka, 27, was stripped of the club captaincy after being involved in an angry confrontation with home fans during the Gunners’ 2-2 draw with Crystal Palace on 27 October.

The Switzerland midfielder has not played for the club since.

“I can’t understand a reaction like that even now, especially the vehemence of it and the extreme hostility directed against me.”

Xhaka was booed as he walked off the pitch as he was substituted against Palace, prompting him to cup his ear, take his shirt off and head straight down the tunnel to the dressing room.

“When my shirt number lit up on the fourth official’s panel and our own fans broke into gleeful jubilation, that hit me very hard and really upset me,” he added.

“Insulting and swearing at your own captain will cause upset and a bad atmosphere for the team you are actually supposed to be supporting; that makes no sense to me and weakens the team’s spirit.”

Arsenal manager Unai Emery said last week that he was unsure whether the midfielder would play for the club again, adding that “he was not ready” to return for Saturday’s match at Leicester, which the Gunners lost 2-0.

Xhaka, though, says he is fully committed to the club and is ready to move on from the incident.

“I’m proud to be playing for this big club. I’ll continue to stay positive, give my all to an even greater extent and prove that I’m an important part of this great team.

“Last week in particular was a very special, emotional experience for me but I’m doing very well again, I’ve trained well this week and am looking forward to my next assignments.”