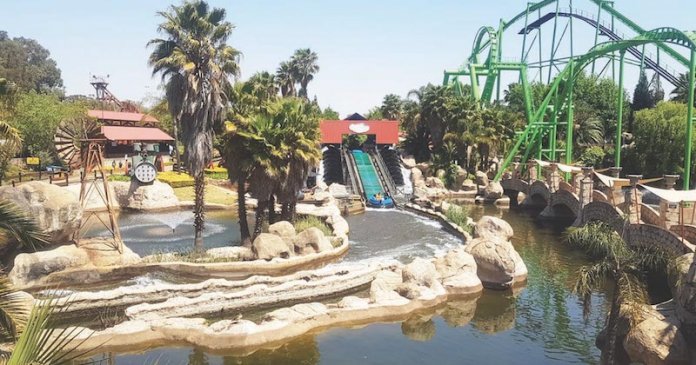 One of the first gold mines in Johannesburg is now home to various forms of entertainment including thrilling rides that keep visitors staying in line and coming back for more, writes Demola Ojo…

You would be forgiven for wondering why a high-speed vertical-drop rollercoaster known as the Tower of Terror has such a long queue. With a fear factor rated 10 out of 10, it is somewhat surprising that the hair-raising ride with a 50 metre, 90 degree drop into an open mine shaft at speeds of 100 kilometres per hour, has a waiting time of close to an hour.

That’s how long it took the members of the group I was a part of – the brave ones who dared – to make it into the car that seats eight.

The Tower of Terror is one of the rides that attract adrenaline junkies to the Gold Reef City theme park. It has the distinction of being the tallest and fastest roller coaster in Africa and the highest g-force of any rollercoaster in the world at 6.3 gs.

The long wait comes in handy for those who – after seeing what those ahead of them go through, hearing their screams of terror and squeals of delight – decide they want to turn back.

The sign which boldly states “It’s too late to scream for your mama!” is not enough deterrent for those who decide they don’t have the stomach for rushing headlong into a former mine shaft.

But just like a hundred years before, when fortune hunters swarmed this site in search of gold, thrill seekers are doing the same now, chasing that rush which is better experienced than described.

Drawn by dreams of great riches, fortune seekers flooded in from far and wide – within South Africa and beyond – and swiftly populated the plains in what was known as the Gold Rush.

Mines were dug, gold was discovered and a burgeoning industry was born. At a point, the Witwatersrand region in Johannesburg produced forty per cent of the planet’s gold.

Mining has been the foundation of the Witwatersrand economy, but its importance is gradually declining due to dwindling reserves. Service and manufacturing industries have become more important to the city’s economy. Tourism is also gaining more significance due to the efforts of the Gauteng Tourism Authority and South Africa Tourism.

Johannesburg has traditionally been more of a business destination rather than one for leisure, but the city is a transit point for connecting flights to Cape Town, Durban, the Kruger National Park and other hotspots.

Consequently, most international visitors to South Africa pass through Johannesburg at least once, which has led to the development of several attractions for tourists.

Prominent among these attractions is Gold Reef City, built on the site of one of South Africa’s first gold mines which closed in 1971.

There is a museum dedicated to gold mining where – among other things – you can see how real gold is poured into barrels.

The casino is open 24 hours a day and has 1700 slot machines and 50 gaming tables, a spacious lounge area and the exclusive Salon Privé gaming lounge reserved for high rollers.

Among the variety of entertainment facilities are restaurants, cafes and bars, as well as the 1100-seat Lyric Theatre, which is frequently used for major concerts and shows. There is also a six-screen cinema, which has been stylishly redesigned to emulate an old-fashioned picture house.

However the theme park is the biggest attraction and what Gold Reef City is famous for. It houses some of the biggest and scariest roller coasters in Africa besides the earlier mentioned Tower of Terror.

For this writer, the Anaconda, an inverted corkscrew rollercoaster with a fear factor of nine out of 10, was just as exciting and has the ability to spike one’s adrenaline even more.

Unlike the Tower of Terror, a short vertical drop which is over in a few seconds, the Anaconda has many twists and turns with a few loops, and lasts for close to a minute.

A single train with 10 cars, each seating two riders for a total of 20 riders, the Anaconda also has a long waiting time. The screams are also louder, magnified by the extra number of people. The length of the train means it can take 600 riders per hour.

A notch below the Anaconda is the Golden Loop, with a fear factor of eight. The Golden Loop is a linear ride that rockets to heights of close to 40 meters at astounding speeds; it goes from 0 – 85 kilometres an hour in just three seconds and takes you through a thrilling 360-degree horizontal loop.

These three rides were the ones the group of tour operators and their clients from Nigeria participated in (remember, only the brave) and considering the wait time, there wasn’t much time to do more.

But there are about 30 rides at the park, many of them leisurely, for those who don’t yearn for heart-stopping moments.

From the Jozi Express, which is designed to move you across tree tops, mine dumps and a breath-taking view of Johannesburg’s CBD, to the Raging River Rapids, which is a memorable trip through old caves and waterfalls and is recommended for families, there is something for everyone.

Miner’s Revenge, Runaway Train and UFO are sure to give a rush (but not like the Tower or Anaconda, sorry) while the Giant Wheel gives magnificent views of Johannesburg.

Gold Reef City’s theme park is a popular place for a family day out and there are rides for all ages, including kids, with the Golden Wave allowing them have their first taste of what it feels like to be a pilot.

With the thousands that throng here on the days it is open (the theme park is closed Mondays and Tuesdays), and the attendant revenue it generates, it’s safe to say that Gold Reef City is back to being a gold mine.

2023: PDP Heading for Another Crisis