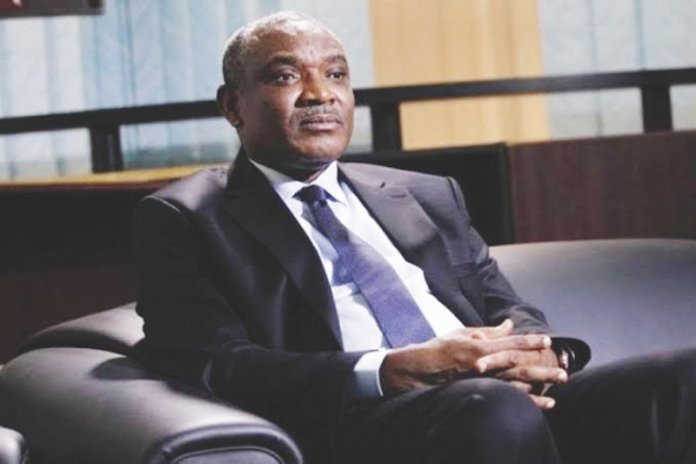 Had the ex-Chairman of Special Presidential Investigation Panel for the Recovery of Public Property, Okoi Obono-Obla, who is currently at large, known that his decision to blackmail Vice-President Yemi Osinbajo could backfire, he might have had a rethink, writes Omololu Ogunmade

Dismissed former Chairman of Special Presidential Investigation Panel for the Recovery of Public Property, Okoi Obono-Obla, must be living with loads of regrets now. Reason? The embattled former chairman of the presidential panel, who was declared wanted penultimate week by the Independent Corrupt Practices and Other Related Offences Commission (ICPC) over alleged misconduct, financial impropriety and abuse of office, had last weekend sought to arouse public sympathy.

This he did by releasing to the media a letter he had written to President Muhammadu Buhari, where he accused Vice-President Yemi Osinbajo of masterminding his travails, because of his alleged refusal to pander to his (Osinbajo) whims and caprices.
In the letter dated August 29, 2019, and addressed to Buhari, Obono-Obla made a series of allegations against the vice-president, saying he made several efforts to frustrate the investigation of some corrupt persons by the disbanded panel.
According to him, his decision to resist such pressure allegedly mounted on him by Osinbajo to halt several investigations of corrupt practices and shield their perpetrators through the Deputy Chief of Staff, Ade Ipaye, in the vice-president’s office, landed him in his current travails.

Obono-Obla was suspended in August by Buhari and subsequently sacked, over a range allegations, including abuse of office, intimidation and unauthorised malicious investigations, financial impropriety, administrative misconduct, forgery, falsification of records, to mention a few.

Faced with prosecution, the embattled Obono-Obla came up with allegations, claiming that he was being witch-hunted by the vice-president, because he chose to be loyal to the president and refused to shield Osinbajo’s cronies.
“I started getting worried over the undue interest and unwarranted interference in the affairs of the panel. I vividly remembered how in February 2018, Mr. Ipaye wrote a query to me, when I started investigating a case of misappropriation of N10 billion allegedly belonging to National Health Insurance Scheme by the Auditor-General of the Federation.

“In April 2018, Mr. Ipaye invited me to his office and instructed me not to proceed with the investigation of some members of the National Assembly. He said he was directed to do so by the Vice President. I also remembered sometime in January 2018, when the ADC to the Vice President stopped the investigation of a case reported against some functionaries of Akwa Ibom State.
“In February 2019, Mr. Ipaye wrote to me instructing me to suspend the activities of the panel on the purported grounds that government was reviewing its operations. He said he was acting on the directives of the vice-president.

“So, from the beginning, the office of the Vice-President through Mr. Ipaye saw the panel as an extension of the Office of the Vice President. I incurred their wrath, because I refused to do their dictates and bidding,” some parts of Obono-Obla’s letter read.

He had probably thought that the game would change if he could make public the content of his letter to Buhari, which had intended to portray Osinbajo, known as a pastor, as a hypocrite, who aids and abets corruption, especially at a time the vice-president is believed to be facing persecution within the same presidency.
But little did he know that he would be worse for it as the accusations now forced the presidency to make public the records of his hitherto unknown alleged atrocities, which only generated deep seated hatred for him and exposed his alleged criminal records.

The presidency had on Monday reeled off several records of atrocities allegedly perpetrated by Obono-Obla, saying the embattled ex-chairman, who is currently at large, violated the mandate of the panel and engaged in all manners of rights’ abuses, gross misconduct and actions which exposed the government to ridicule.

The records as released by the presidency revealed several records of petitions written by individuals and groups on how Obono-Obla allegedly manhandled or extorted and engaged in all manners of fraudulent practices.
According to the release, approval for the constitution of the panel under the chairmanship of Obono-Obla was formally given on July 27, 2017, by Osinbajo in his capacity then as the acting president on the recommendation of the then acting Secretary to the Government of the Federation, Dr. (Mrs.) Habiba M. Lawal, pursuant to the provisions of the Recovery of Public Property (Special Provisions) Act Cap. R4, Laws of the Federation of Nigeria (LFN) 2004.

However, the presidency said whereas the panel was only mandated to act on matters referred to it in writing by the president or his designate, Obono-Obla violated his job description and flagrantly abused the rights of individuals, government agencies, private companies, and simultaneously extended such abuses to foreign missions in Nigeria.

The release claimed such flagrant abuse and maladministration resulted in a series of complaints and petitions that culminated in the intervention of the vice president through the Attorney General of the Federation, Abubakar Malami.
It also said following the intervention, Obono-Obla submitted a written undertaking dated November 10, 2017, where he pledged to thenceforth “only act on a written mandate received from the Presidency, and will seek authorisation from the Presidency to undertake fresh mandates in accordance with extant laws of the Federation.”

But despite the undertaking, the release stated that, Obono-Obla’s alleged atrocities continued unabated, recalling how his alleged abuse of office included applying for forfeiture of properties, which it said the panel had no power to do even though “two courts respectively held that the panel has no powers to apply for forfeiture of properties”, because “the Recovery of Public Property (Special Provisions) Act 2004 did not empower the panel to initiate and prosecute criminal charges against anybody.”

The presidency also recalled how the courts ruled that the panel’s functions came to an end “upon its compliance with Section 4(4) of Act which requires it to, at the end of its investigation, submit its findings to the Head of the Federal Government.”
Buttressing its submission that the presidency received several complaints and petitions over alleged abuse of office by Obono-Obla, it proceeded to release details of some of the atrocities as contained in the petitions.

“The under-listed petitions are just samples of dozens of petitions received by the Office of the Vice President. It is worthy of note that there was no referral to the Panel, from the Presidency, of any of the matters mentioned in the petitions.
“Petition dated 28 November 2017 from Ugochukwu Okwesili, Head Litigation, United Bank for Africa challenging a demand by the Panel for the statement of accounts of four of its customers in relation to a matter he claimed had been thoroughly investigated by the Office of the Inspector General of Police, the Akwa Ibom State Internal Revenue Service and the Federal Ministry of Justice, and clearance was issued by the three authorities.

“Petitions dated 2 January 2018 and 16 May 2018 from Peter N. Eze, solicitor to Senator Ike Ekweremadu, challenging allegations by the Panel that the senator had illegally acquired the official residence of the Deputy Senate President and directive to vacate same and declare his assets to the Panel; and filing by the Panel of an application at the Federal High Court for an order to temporarily attach/forfeit certain properties of the Senator. The petitioner claimed that there was no prior invitation or impartial investigation by the Panel.

“Furnish it with details of a purported withdrawal without proper authorisation from the Treasury Single Account of the sum of Ten Billion Naira (N10,000,000,000.00) belonging to the National Health Insurance Scheme; and for the Accountant General of the Federation to complete and return, within 30 days, Declaration of Assets Form to the Chairman of the Panel.

“Petition dated 1 March 2018 from Alhaji Tijani Musa Tumsah, Vice President of both the Presidential Committee on the North East Initiative and Victim Support Fund to the HAGF alleging harassment and malicious prosecution by the Panel, which he attributed to his refusal to influence contracts in favour of its Chairman and refusal to donate towards the public presentation of his book titled ‘All Progressives Congress, the Making of a Change Agent’ because of factual inaccuracies,” the release said among several others.

The release also stated that Unity Bank Plc submitted a petition detailing the panel’s alleged order for reconciliation exercise following a request on September 7, 2018 by the panel requesting for hard and soft copies of statements of accounts of both naira and domiciliary accounts of 16 departments and agencies of the federal government with the allegations that there were arbitrary/excess bank charges on their accounts.

It added: “The bank alleged that none of the above listed agencies were aware of the investigation and although the reconciliation was ongoing with the NNPC, NPA and NCS, the Panel has issued demand notices and demonstrated unwillingness to admit further evidence.”

It also said another petition by one Adejo-Ogiri D. Owoicho, solicitor to Alhaji Adamu Teku, on June 13, 2019, reported how his client’s house at Gwarimpa, Abuja, was marked for seizure and reallocation by the panel, “for failure to give a bribe of Twenty Million Naira (₦20,000,000.00) to a certain Professor Kester.”

According to the release, the bribe was “to facilitate the interception of an investigation report to the panel and prevent a letter of complaint/invitation from being issued as a result. He had claimed that the money would be shared on a 50/50 basis with Mr. Obla.”

It also said in an email correspondence on June 18, 2019, the Solicitor General of the Federation submitted some documents revealing how Obono-Obla engaged the services of Omojay Limited as auctioneers, using the Federal Ministry of Justice as a cover.
It added that Omojay Limited was instructed by the panel to auction several houses, landed properties and automobiles, highlighting various categories in which the assets were meant to be sold.

Respectively, it highlighted the total value of the properties to be sold at N2.364 billion, N885million, N583 million, N382 million, N294 million and N235 million, adding that the value of two categories of automobiles to be auctioned were valued at N172.4 million and N308.05 million respectively.
The presidency, therefore, said the alleged criminal acts were perpetrated by Obono-Obla’s panel in addition to physically assaulting some individuals, including women, who had to be hospitalised.