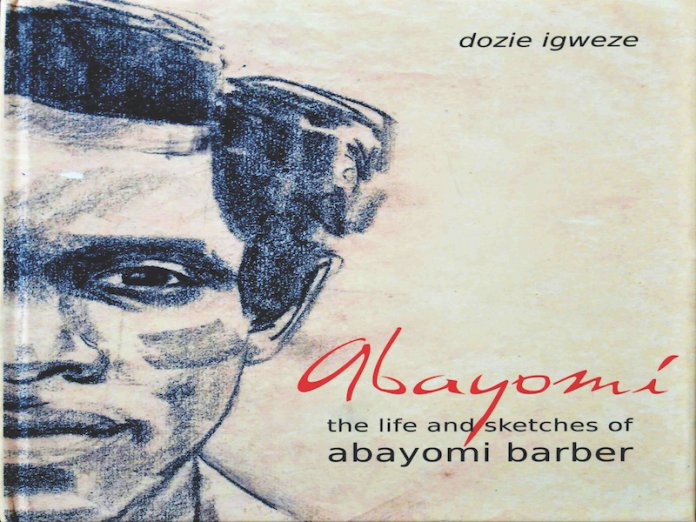 In his latest book, distinguished by its breezy brevity and cinematic dialogues, Dozie Igweze grants the reader a privileged access into the enigmatic world of a local visual arts luminary Abayomi Barber. Okechukwu Uwaezuoke writes

Perhaps, it would be spot-on to affirm that Abayomi Barber recently wormed himself back into the industry limelight. The local visual arts colossus, best known for distancing himself from the Western perceptions of African art, turned 91 on October 23, according to Wikipedia.

Just as the Lagos art scene was revving up with high-octane events, an art exhibition and a book presentation in his honour at the Hourglass Gallery along Saka Jojo Street in Victoria Island once more beamed the spotlight on this surrealist painter and sculptor. While the week-long exhibition featured sketches related to the book, the book itself compresses the story of the artist’s life in a brief, breezy and matter-of-fact manner.

Titled Abayomi: the Life and Sketches of Abayomi Barber, the hard-cover generously-illustrated book is the latest of the author Dozie Igweze’s textual tribute to Nigerian visual arts legends. Igweze’s two previous books were on Bruce Onobrakpeya and Duke Asidere.

“This story isn’t just about Abayomi. It’s also about his legs and mind,” Igweze informs his readers in an interesting foreword he unpretentiously titles “Opening”. Personifying the artist’s legs and mind is the Hourglass proprietor’s way of wrenching his audience from the embrace of superficial passivity. He wants them actively involved in the narrative and to imagine the artist’s legs and mind engaged in a perpetual conflict. Of the legs, he says: “[they] seemed to have a life of their own. They wanted to walk away from troubles, and boredom, and difficulty. They just wanted to walk away, and to keep walking. And every chance they got they walked.”

“The mind,” he continues, “sometimes agreed with the legs; but sometimes went on its way. It was quirky, curious, flighty, and resolute about its freedom. Abayomi was the impossible conductor of mind and legs, the victim of a constant conspiracy.”

Thus equipped, the reader accompanies the author in spirit to sometime back in 1972. Place: University of Lagos, at the gate to the vice-chancellor’s precisely. Without warning, the author whimsically begins the narrative with a re-enactment the artist’s encounter with an officious head guard, who barred his way from attending a party at the lodge in honour of the visiting Ethiopian head of state, Emperor Haile Selassie. He had, according to the story, produced a portrait of the visiting foreign dignitary and this portrait was to be presented the latter by his Nigerian counterpart, General Yakubu Gowon. “Abayomi had been instructed by the Vice-Chancellor to attend and speak with Selassie,” Igweze writes. “He’d been warned to be prompt.”

The head guard, whose judgement by appearances seems to be the norm in a materialistic society like Nigeria, obviously couldn’t imagine the plain-looking man standing before him hobnobbing with the dignitaries in the lodge. So, he denied him entry.

Having retreated from the gate, the artist had to inveigle himself into the lodge through the backdoor after wending his way through a thicket beside it. The author’s account of this walk to the usually unmanned rear entrance of the V. C.’s lodge not only draws the reader’s attention to the artist’s restless legs, but also introduces him or her to the workings of the latter’s mind. To the creative mind, the play of the moonlight on the leaves offered some possibilities.

With a flashback, the author teleports the reader back to sometime in 1940. This was a time when the artist as a 12-year-old took a 79-kilometre walk from the south-western Nigerian town of Ibadan to Ife. “His mother was in Ife with his older siblings, but he had been instructed to remain in Ibadan with his uncle for proper training, which involved copious amount of beating,” Igweze writes. “Abayomi found this brutal physical imposition much to his distaste and had decided on escape as protest.”

Again, this walk presented him an opportunity for his inner musings, which led to his personification of the trees, each with its own peculiar character. “It was like walking down a road full of all sorts of different people. There were robust, cheerful trees with leaves that danced to the skies. There were more reticent trees with their secrets. There were friendly, affectionate trees with happy leaves.”

Perhaps, the beauty of this narrative lies in the author’s penchant for brevity. This is even when he takes his time to re-enact scenes from a distant past in cinematic dialogues. Thus, he ensures that there can be no dull moment for even a casual leader, who gains a privileged access into the enigmatic world of a local visual arts luminary.

Young Abayomi’s walk from Ibadan to Ife – split into three segments, each representing a day – attests to the steely sense of purpose that has ever since guided his life till date. It also affirms the uniqueness and independence of a human spirit in its struggle through the vagaries of material existence. Even with an ethereal blindfold, which sometimes takes the form of family bond and dogmatic traditions, the resolute creative spirit manages to wriggle itself out of unpleasant situations.

A quick cut to Lagos in 1952 takes the reader to Abayomi’s stint as a graphic artist with the advertising agency, The Nigerian Advertiser, owned by K. O. K. Onyioha, a former employee of the late nationalist Nnamdi Azikiwe’s West African Pilot. Not even the fact that he liked the idea of being an artist stopped him from moonlighting with Dele Bamgbose’s jazz band and later with Victor Olaiya’s The Kool Cats.

His restless legs and mind would later see him drift from a studio in the Obalende area of Lagos, where he carved thorns, to Lagos Grammar School, where he had to deal with recalcitrant students as well as to Yaba College of Technology, where the British art instructor extolled his proficiency in portraiture.

The restless creative soul soon found himself moving on to other experiences in Ibadan until finally the weaving of fate corralled him into the circumstances that led to his meeting with Chief Obafemi Awolowo.
It was through the latter that he eventually found himself in London in 1961 on then Nigeria’s Western Region scholarship. Part of his brief was to produce a statue of Chief Awolowo. But, it was this that ironically led to his losing his scholarship. This was after he refused on principle to obey Chief Ladoke Akintola’s order to abandon Awolowo’s stature and do his own instead.

With the closure of that door, other doors opened. The abrupt stopping of the monthly stipends led to his running out of money. Starvation stalked him until his legs forced him outdoors to an artist’s studio, where he showed his sketchbook to the owner. It was through the latter that he got his first job at Edward Delaney’s studio in 1963. Moving on, he had a stint with the Mancini brothers – Mark and Frederick – before getting introduced to the Croatian sculptor Oscar Nemon, whose studio was in the garden of the Queen mother’s residence at St. James’ Palace. According to Igweze, Abayomi “would work as Nemon’s main assistant for many years until the lure of palm wine distracted him.”

The 227-page book is not just about Abayomi’s constant urge to move. Igweze takes the reader through a crash course on the artist’s love life while in London. Ola, his initial paramour, had moved on when he didn’t show he was ready to get married and move back to Lagos. But, he consented to marry his next sweetheart, Bola, who it turned out was not suited to his temperament.

Back to the V. C.’s lodge, the concludes the narrative in suspenseful few lines, which compel the reader to fill in the blank spaces. Walking in through the lodge’s kitchen, through which the sound of music and voices drifted to him, it is assumed that the presentation of his portrait went smoothly.

True, Igweze skilfully leaves a lot in the biographical account to the readers’ conjectures. Yet, the flow of the big font-sized text is generously interspersed with the artist’s sketches and drawings, which are more eloquent than a thousand words.

Not even this beautifully-packaged book is free of avoidable flaws. For instance, the question mark in the second sentence of the foreword is wrongly position at the end of the sentence. Thus, rather than “What’s the difference, you might wonder?”, the sentence should have been “What’s the difference? you might wonder”. Again, in a few instances, the closing quotation marks in dialogues are wrongly positioned.
In any case, none of these flaws are seriousness enough to diminish the quality of this book, which compresses Abayomi Barber’s biography into an accessible format. 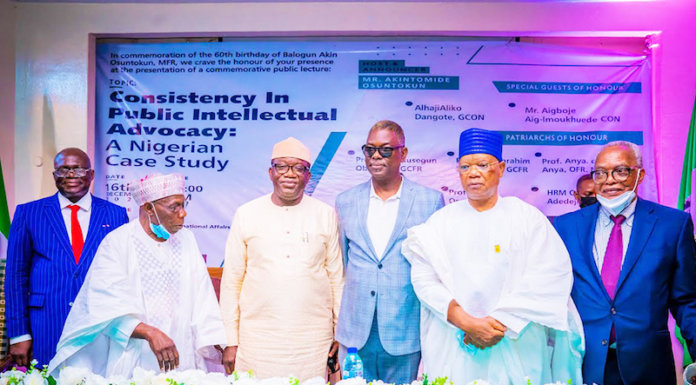