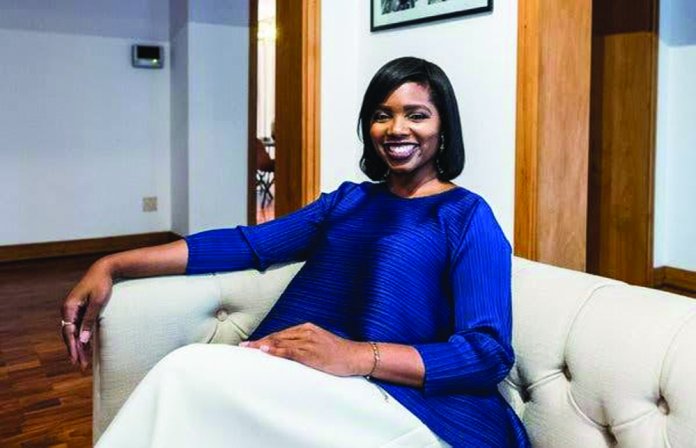 From being the Head of Marketing at a leading alcoholic brand to creating the most exciting art fair in Africa, Art X Lagos, Tokini Peterside’s doggedness and inner strength have contributed to changing the narratives for contemporary African women. Yinka Olatunbosun reports

In global media today, there are many reports on women for all the wrong reasons. If they are not victims of domestic violence, then they must be victims of sexual abuse or human trafficking. However, a significant number of women in Africa are now pioneering rare accomplishments in their homeland and impacting the world in very positive dimensions. One of them is Tokini Peterside.

Tokini began her journey into self-discovery when she made one difficult decision. She left an otherwise lucrative career in the corporate world to focus on being a creative entrepreneur as the Director of TP Collective in 2012 but is now known as ART X Collective Ltd. Four years ago, the idea of ART X Lagos was created by Tokini to unite the art world across Africa and diaspora. Ironically, she neither draws nor paints but is very good at brainstorming creative ideas with friends and associates.

Beneath the glamour of red carpet paparazzi is this very private individual with a disarming yet guarded smile. She may walk into a room full of people but she is attentive to every face and demeanour. Perhaps, her attention to details is the reason why she began collecting art just like her mother. Her Ikoyi office is a mini-gallery of sorts as it boasts of an assortment of beautiful works from various artists.

In more ways than one, Tokini shares an almost identical business sense as her father, Atedo Peterside, the former Chairman, Stanbic IBTC. At 33, Atedo founded this $billion business from a relatively small office. Tokini’s mother, Dudun Peterside is a psychologist and executive coach. She is also an avid lover of polo and is said to be one of the few female members of the Lagos Polo Club, Ikoyi.

Flashback to First Consultants Hospital, Obalende, Lagos where Tokini was born. The young and passionate entrepreneur grew up between Nigeria and the United Kingdom: “As my father likes to remind me, I was born in Obalende. I was taken home to Bode Thomas and later moved to Musa Yaradua Street in Victoria Island. From the age of three to 21, I was on Saka Tinubu Street. I used to ride my bike from Saka Tinubu to Idejo Street. Today, if I go there, I can’t even recognise those places. They have changed in many ways for the better. Some for the less good,” she recounted at the grand opening of ART X Lagos.

Her family is a close-knit one. Her parents as well as her siblings, some of whom had to travel to Lagos were present for the 4th edition of the fair which ended last Sunday.

Tokini studied at Cheltenham Ladies College and Westminster School. She holds a First Class degree in Law from her father’s alma mater, London School of Economics and Political Science. In addition to her academic records, she has full professional proficiency in French. In 2015, she attended the Business School, INSEAD where she obtained a Master of Business Administration (MBA). She doesn’t just hold a Master’s degree in business; she has a mastery of it. Many business ideas are dead on arrival without funding. Having worked with different clients over the years, she noticed that some of these truly exceptional creative minds with big dreams and projects lack funding. Hence, Tokini found a way to give ART X a lifeline.

“I have been to every bank. At each bank, I know the way in and out. I know the security guards,” she explained as she recalled the path towards getting sponsors for the project. Earlier, she had sought for government financial support but was reminded that it was a private initiative and so, she should look within the private sector for assistance. As soon as Access Bank got on board, other doors began to open.

In the previous three years, over 22,000 visited the fair which has since expanded and outgrown its traditional venue, Civic Centre. Now domiciled at the Federal Palace Hotel and Casino grounds, Tokini’s ART X project is now the toast of many international art galleries.

“We write every invitation letter required for visa processing for our visitors from outside Nigeria. I get calls in the middle of the night telling me that embassies need my certificate of incorporation and passport and we are sending them all over the world. My personal ID details are all over the world,” she gushed.

She wouldn’t claim the entire credit for putting Nigeria on the global map for arts. She acknowledged how Nigerian music has contributed largely to how the Nigerian brand is seen in different parts of the world.

“Our music is being played at all airports all over the world. I was in a restaurant in Cambodia and Nigerian music popped on the radio. I almost choked. Our fashion and film have gone far. Our visual arts are going so much further,” she affirmed.

Asides reading books and watching movies, Tokini loves partying at ART X Live which is the music segment of the fair and she does it till dawn.

“A lot of people don’t know that ART X Live for me is such an important personal project,” she revealed. This session is very attractive to young audience and that is the whole essence of what Tokini has tried to do with the fair.

She wants the visual arts audience to be a hybrid of the young and old. Initially, it was at no cost to enter the fair but to protect the experience and manage the crowd, tickets are sold but certainly not to the children of Makoko, Agege and other communities where she had reached to expand the audience of the fair. Busload of children participated in this year’s edition of the fair with the guidance of her team members who warmly received them. That seemed to be her answer to the widespread criticism that ART X Lagos is elitist. She is very keen on inclusiveness. Though she hails from Delta State, it is not unusual to hear her drop a few Yoruba lines while talking.

With uncommon courage, Tokini launched ART X Lagos four years ago just in the heat of economic recession. Her determination to make this fair a dream come true has given hope to the arts community at large and many new art fairs have sprung up in Lagos owing much to the success story of ART X Lagos.

She is also one who takes criticisms seriously. One of such was on the traffic situation around the venue during the fair. With help from Lagos State Transport Management Authority (LASTMA), Nigerian Police, Federal Road Safety Corps and men of the Nigerian Army, the traffic was very manageable.

In July 2018, Tokini led the visiting French President, Emmanuel Macron through a special exhibition of Contemporary Nigeria art during the “Celebration of African Culture” which was held at the New Africa Shrine, Lagos as a precursor to the African Cultural Season scheduled to hold in France in 2020.

Arguably, Tokini is one of the most decorated women of her generation. In 2019, Tokini was named on Fast Company’s 100 Most Creative People in Business list.  In the previous year, she was listed as part of the Quartz Africa Innovators 2018: A list of the continent’s Top 30 pioneers. In 2017, she was named to the MIPAD 100, a list of the Most Influential People of African Descent under the age of 40, an initiative in support of the United Nations’ International Decade for People of African Descent. In 2017, she was named Her Network ‘Woman of the Year’ in the Arts Category. In 2011, Tokini was named “Corporate Professional of the Year” at the Future Awards Africa.