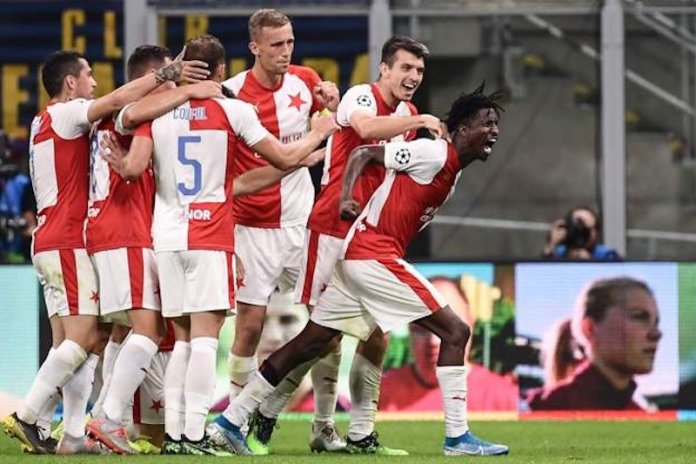 Call it a pound of flesh and you may not be far from the truth. Peter Olayinka may not have scored in Slavia Prague visit to Nou Camp on Tuesday to avenge for his deflected goal that gave Barcelona victory in the first leg, his performance gave Nou Camp faithful a lot to ponder

Peter Olayinka scored an own goal as Slavia Prague fell to a 2-1 loss against Barcelona three weeks ago in the UEFA Champions League game as he deflected a Luis Suarez shot with his chest in the 57th minute to put Barcelona ahead again after Jan Boril cancelled out Lionel Messi’s opener.

In the return leg at Nou Camp on Tuesday night, Olayinka may not have scored but he was a thorn in the flesh of Barcelona and forced their defender, Gerrard Pique to foul him and was booked which would make the defender to miss the Barca next game against Borussia Dortmund.

Indeed his performance did not go unnoticed by his compatriot, Asisat Oshoola who plays for Barcelona femini.

Super Falcons striker praised the spirited performance of Olayinka after his Czech side, Slavia Prague left Camp Nou with a point following a goalless draw against the Spanish champions in the Champions League on Tuesday.

The Super Eagles forward, who played the entire duration of the game, was a handful for the Blaugrana defenders as his physical presence made life difficult for the likes of Pique, Clement Lenglet, Nelson Semedo, and Jordi Alba on the night.

Oshoola took to her official Twitter handle to commend the energetic display of the former KAA Gent of Belgium player.

In an earlier group match against Inter Milan at the iconic San Siro Stadium, Slavia Prague were on the verge of beating the host after Olayinka deservedly put the underdogs in front in the 63rd minute of their UEFA Champions League opening match in September but a 92nd minute equaliser from Nicolo Barella ensured that the Italians shared the spoils.

The goal, a first for Olayinka in the European elite football championship, came at a venue which holds a lot of memories for the Nigerian.

“San Siro is one of the most popular stadiums. I used to select the stadium when I used to play video games growing up,” he said on Instagram.

Olayinka admits he was nervous at first, but the feeling of scoring at such an iconic stadium was overwhelming.

“When I got to the stadium, I was very nervous, even before the game. I was thinking of the stadium, and after scoring I didn’t know how to celebrate it. The feeling was overwhelming, but it was absolutely fantastic.”

His goal against Inter Milan made him become the first Nigerian to score on his Champions League debut since Yakubu Aiyegbeni’s hat-trick for Maccabi Haifa against Olympiakos in September 2002.

The 23-year-old made his debut for Nigeria against Brazil in an international friendly last month following eye-catching performances for his club in the league and in Europe.

However, ahead of the Africa Cup of Nations, AFCON qualifying showdown against the Squirrels of Benin and Likuena of Lesotho, the Prague striker was not included in Gernot Rohr’s final 23-man list, hence, had to settle for a spot on the standby list.

Olayinka says he had a rough beginning as a young aspiring footballer, saying he had little parental support as his father didn’t think a career in football was possible. “At first my dad didn’t support me,” he told Brilla FM.

According to him, things were tough to the extent that he could barely get food to eat before going for practice.

He said, “I was on the streets for a very long time, things weren’t easy. I suffered mostly growing up; things were difficult. I would drink garri and kuli-kuli or go on an empty stomach after practice. But I kept my focus and would pray for a breakthrough.

“Later he noticed I could make a living from it and he became my number one fan. He bought me playing kits and my boots.”