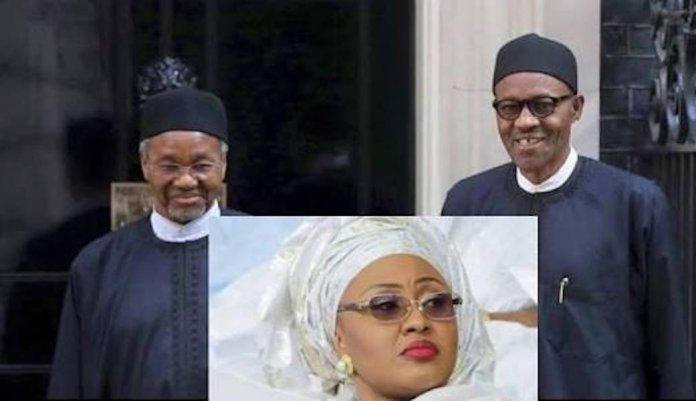 When I look back now, I think the struggle against former President Olusegun Obasanjo’s Third Term Agenda, cemented my relationship with Malam Mamman Daura. As Editor of Daily Trust, I had been one of the earliest people, who got to read an outline of that agenda. We held very robust debates in our weekly Editorial Board meetings, which I also chaired, and we knew, that it was a moment that called for the most definitive struggle, against what was designed to jeopardize Nigeria’s democratic consolidation. I was very convinced at the personal level, that Nigeria deserved better, than what Obasanjo evolved into, and most especially, the ridiculous personality cult, that denizens of the PDP, were desperately trying to construct for the man. I was deliberately, polemically provocative, in my descriptions of Obasanjo, and especially after the National Assembly shot down the elaborate charade of the Third Term Agenda. I repeatedly described him, as “the Disgraced Despot”! That I think was the clincher, because Malam Mamman Daura would send me texts; and even verbal messages, through various emissaries. But he never forgot to ask about “the Disgraced Despot”! For many who belonged to the Kaduna circles of the period, that literally became a description that identified my writings.

Malam Mamman Daura’s home in Kaduna was where we gathered during the evenings, whenever I was back home for weekends. That offered a peek into several sides to his person. There was the constant supply of the evening tea and “small chops”; the television was almost always tuned to SKY NEWS, and the house had an incredibly ordered neatness, while the man, walked with his socked feet, had a gentle manner, as well as an unfailing courtesy. Malam Mamman would politely offer to make the cup of tea for his visitor, and speak with a cultured low tone, but with an air of authority, of a man, who seems so much at peace with himself and his condition. He would not fail to ask about your family, work and then show a genuine concern about the state of the country. As you’re beginning conversations, and most of the time he seemed so able to make his visitor do the talking, and as he scrutinizes with intensity, the house begins to fill with other visitors; mostly, these were often members of the old Northern intellectual, bureaucratic and political elite. They greet each other, and the younger people like me, with as much respect; and of course, they teased you endlessly about one or the other piece that you had written, that they enjoyed reading. Usually, Dr Mahmoud Tukur would lead the prayers; Maghrib and Isha, and then, there were further exchanges of courtesies, as people began to depart for their residences, only to repeat that day’s scenario, the following day.

The generation that Malam Mamman Daura belongs to, was a most privileged one, in the historic settings of Northern Nigeria, and our country in general; but they never took their privileges for granted. They saw themselves as being called to duty, in the race for modernity, that was very much cured, within the history and cultures of our people. They worked hard and excelled in all that they were assigned to do. And who would talk about the history of journalism in the North, and the tremendous impact of the New Nigerian newspaper, without remembering the excellent manner that Malam Mamman Daura edited it? During my years, as pioneer Editor of Daily Trust newspaper, we got the occasional Op-Ed pieces from Malam Mamman Daura, and we used to enjoy those pieces, admiring the simplicity of style and the elegance of prose, as well as the manner that he would so generously breath life, into often forgotten aspects of history, or as he helped to fill missing but important gaps, in aspects of the drama of life in the old Northern Nigeria. One felt richer in knowledge, reading Mamman Daura, as much as spending time to hear him talk about their years of service to our region and country.

For me, what I found most admirable about Malam Mamman and his generation of elders, was the way that they retained a loyalty, not only to themselves, but also to their elders and to the memory of their earlier years of service to Northern Nigeria. It was something that I noticed with the late Chief Sunday Awoniyi, the late Malam Adamu Ciroma, Alhaji Adamu, Wazirin Fika; and that community of trust, I also witnessed with the late Malam Yahaya Gusau. We were preparing for Maghrib prayers on a Saturday evening, at Malam Mamman Daura’s residence, when Chief Sunday Awoniyi was driven into the compound. There immediately formed, what resembled a mini welcome party, as Dr. Mahmoud Tukur, Malam Mamman Daura, the younger Malam Abba Kyari, and others, including this reporter, joined the cue to receive the venerable Chief Awoniyi. As he called each one: “Mahmoud, Mamman, Abba…”; what rang out loudly, from each one of them, was a “Sir”! In that moment, I saw a re-enactment of the traditions of leadership and respect, which was the foundation upon which service and social existence were constructed in the old Northern Nigeria. Of course, these welled up nostalgia and deepened fascination for those times past.

There are more intimate details of life, especially at the family level, that I am not really competent to talk about, in respect of the 80 years of life, that Malam Mamman has lived. But I have spoken several times in the past, with Fatima Mamman Daura. And the intensity of love that she expresses for her father, gives an indication of the ambience that he ensured for his family. Fatima sent me a most love-suffused prose, that she was pushing to publish, as her tribute to a father that she obviously loves and admires very much, on this 80th birthday anniversary. And especially in the years since President Muhammadu Buhari was elected, members of the Mamman Daura family, have lived through the pain of the most merciless levels of criticisms and lurid accusations, directed at their father; and I believe they must be hurting! All one had to do, is survey the body of messages on social media today, and some of those postings against Malam Mamman Daura, would literally make one gasp for air! And it must be doubly painful, that nobody ever defends him or at least offer a different narrative, about the old man. But these are reflections of the times that we live in, in our country, when the most negative stories about individuals, are those that easily find traction in the social space. We live in a setting characterized by a deep lack of trust of authorities, and within a milieu of targeted opprobrium, especially for an individual like Malam Mamman, who has been repeatedly caricatured, as being the embodiment, and at the head of a so-called “Cabal”, that literally does to the rules of normal engagement, what Yuri Geller does to iron, “bend them”! Yet, most of those who would write or post these incredible tales about Mamman Daura, hardly ever know the real man, beyond the persona that they themselves have constructed in the social space of our country.

They are further confounded by the fact that the man maintains a stoical silence, and carries on his life, without ever responding to the various ludicrous allegations made against him. Surely, he must find the various allegations against him as incredible as those who have been privileged to know him closely. But again, he would not even allow a peek into his innermost thoughts, on these negative characterizations. He is far more interested in discussions about how conditions in our country would be better; and would also sympathetically request to know how you’re faring in the work you do, and what difficulties you are encountering. Malam Mamman Daura is very loyal to his family and friends; he loves our country deeply and wants the very best for it; he is a most decent elder, who had enjoyed the privileges of service to our country, at a time when service carried tremendous responsibility. He is strictly of that old school of respect for culture, authority and piety. However, our country has become very young today, and with a population that is over 202 million, and a median age of 17.9 years, the times are completely different. And the values have also evolved, and the jury is out, on whether these evolutions are for the better. But we are fortunate, that elders like Malam Mamman Daura, are still very much with us, whose experiences, sense of loyalty and easy manners, remain veritable fountains of knowledge. We can paraphrase the words of Professor Hampate Ba, that old people like Mamman Daura, remain living libraries. Malam Mamman Daura: loving husband; doting parent; editor; writer; entrepreneur; intrepid raconteur; devoted patriot; on your 80th Birthday sir, please accept my best wishes, for happiness, peace and more useful labour to humanity!