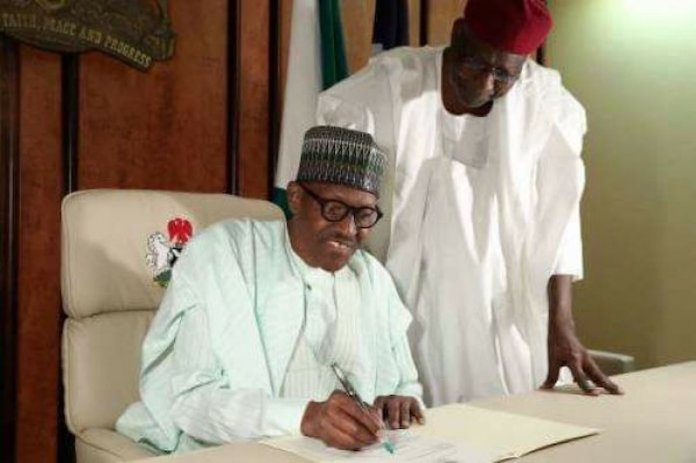 •How Abba Kyari, Lawan worked together on PSC Amendment.

The successful amendment of the Deep Offshore and Inland Basin Production Sharing Contract (PSC) Act governing the PSC agreements between the federal government and the International Oil Companies (IOCs) has put the integrity of the IOCs to question following their opposition to, and frustration of, the reform legislation for several years, THISDAY’s investigation has revealed, just as details have emerged on how President Muhammadu Buhari, through his Chief of Staff, Abba Kyari, and the President of the Senate, Dr. Ahmad Lawan, worked together for over 26 days to pass the bill in the National Assembly.

The IOCs came into Nigeria as development partners and oil prospectors, drilling hydrocarbons, and sharing the accrued revenue with the country.
However, the passage of the Deep Offshore and Inland Basin PSC Act, according to industry analysts, has exposed how greedy these multinationals are in view of their sustained opposition to the amendment of the Act. Said one analyst, “how can two partners agree to review an agreement when pricing improves, and when it does, one partner frustrates the review, smiling to the bank at the expense of his partner, the landlord for more than a decade?”

At the time the PSC agreement was signed by the federal government and the IOCs in 1993 when oil price was hovering between $8 – $13 per barrel, there was proviso that when oil price exceeds $20 per barrel or after 10 years of the agreement, the contract should be amended to enable Nigeria receive a greater share of the oil revenue.

“But when oil price rose above $20 per barrel, oil companies frustrated the efforts to amend the Act using proxies to bribe the relevant government agencies that attempted to initiate the amendment process,” one of the industry analysts told THISDAY off the record.

Lost to this mischief by the IOCs, according to the federal government, is some $62 billion, an amount that become a subject of litigation by the government, which is trying to recover the hefty sum. But independent analysts put the loss to Nigeria of some $16 billion and not $62 billion.

Another analyst queried the relevance of the IOCs in Nigeria’s oil and gas industry, insisting that Nigeria can always use her oil resources to buy technology and expertise to run her oil and gas business.
He cited the case of Iran, which sustained its oil and gas industry, producing 3 million barrels of oil equivalent per day even in the face of global sanctions.

“So, do we need the IOCs? The answer is No! Oil and gas business is a global business and what is needed is money, technology and expertise. Money is with us and the other two can be bought as demonstrated by Africa’s richest man and President of Dangote Group, Alhaji Aliko Dangote, who leveraged on his international contacts and credibility to build Africa’s biggest refinery when the IOCs refused to build refineries for more than 60 years of oil production,” the analyst explained.

He noted that it took the intervention of President Muhammadu Buhari and his chief of staff, Malam Abba Kyari, to get the National Assembly to pass the bill in record 26 days, after the amendment process had dragged for over 10 years due to the opposition of the IOCs. In one of the consultative meetings with the IOC’s in the Presidential Villa, Abba Kyari reportedly told them that what the President wanted was fairness and equity, “fairness to the nation and equity to investors, a win-win scenario.” He told them: “The days when IOC rape Nigeria of resources is over – at least not under his watch.”

The country’s push to earn more revenue from oil had received a major boost when President Buhari assented to the Bill.

The House of Representatives had earlier concurred with the Senate and passed the bill.
With the signing of the bill into law, the country is projected to earn an additional income of $1.4 billion annually from oil majors.

The passage of the bill, according to analysts, will also provide the federal government further legal backing to pursue the $62 billion claim that it claimed arose as a result of the failure to review the production sharing formula, when oil price exceeded $20 per barrel.

A new Section (18), of the Act provides that: “Any person who fails or neglect to comply with any obligation imposed by any provision of the bill commits an offence and is liable on conviction to fine not below N500 million or to imprisonment for a period not more than five years or both.”

Under the new fiscal regime as contained in the amendment to Section 5 of the Principal Act, the federal government approved royalties of 10 per cent in Deep offshore greater than 200 water depth and 7.5 per cent in frontier/Inland basin.

The new Act also adopted royalty price in order to allow for royalty reflectivity based on changing prices of crude oil, condensates and natural gas. This also replaces the necessity for Section 16 of the Principal Act.

The amendment also provides a new section 17 which states that: the Minister shall cause the Corporation (NNPC) to call for a review of the Production Sharing Contracts every eight years.

“The royalty based on price shall be identical for the various water depths in Deep offshore (beyond 200metres water depth) including frontier acreages for crude oil and condensates.”

The federal government had earlier begun moves to recover as much as $62 billion from international oil companies, being backlog of its share of income from the PSC.