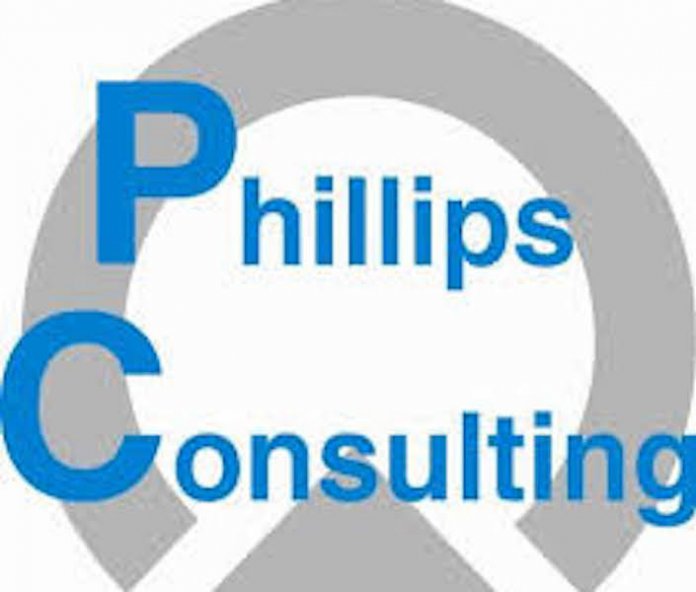 Peter Uzoho
Phillips Consulting (pcl), an indigenous management, business and digital technology consulting firm, has advised states across the country to begin to enter into strategic alliances in order to tackle unemployment and create jobs.

Speaking at the monthly meeting of Nigerian-South African Chamber and Commerce (NSACC) in Lagos, the Managing Director of Phillips Consulting, Mr. Robert Taiwo, said to support the federal and state government efforts in addressing unemployment and creating jobs, Phillips Consulting would work in collaboration with its content partners to deliver free online training worth N75 million to 500 Nigerian youths across the country.

In Nigeria, Taiwo said, there have not been many such strategic partnerships both in the private and public sector.
“We rather have several silo businesses and short-lived enterprises. However, the current challenges in the business community and the lack of fund accruing to states, has created the imperative for collaboration in both public and private sectors,” he said.

During the event, the governors of both states participated in a panel session moderated by Foluso Phillips, the Chairman of pcl.
The Lagos/Ogun Partnership Alliance (LOPA) model is the first of its kind in Nigeria and was targeted at addressing issues such as the decongestion of Lagos State, development of a land port, rail and water transportation between both States, private-public partnership (PPP) funding for infrastructural development, a grand masterplan for the integration of both states and extension of their vision by working closely with the development agenda for Western Nigeria (DAWN) Commission; a ‘Lagos /Ogun Integration Summit’ organized in collaboration with DAWN will be a good start.

At the meeting both governors identified several quick wins, which included signing of the already prepared agreement by both states to set up a Lagos/Ogun Commission that will handle all issues that are of common interest to the states.
Others included to execute the Joint Resident Registration Scheme to tackle insecurity, completion of an ongoing rice mill in Lagos that would receive and process most of the rice input from Ogun State and expansion of trailer park in Ogun state to help ease the Apapa traffic congestion in Lagos.

The partnership also sought to address the conclusion of an agreement with the federal government to take over the completion of several federal roads bordering the two states such as the Lagos – Sagamu Expressway which is only at 20 per cent completion.
According to the managing director of Phillips Consulting, for such a model to succeed, “it is important for each State to have a clear vision prior to the initiation of the partnership. The planned partnership must align with the vision of the collaborating States.”
Other key ingredients identified for a successful take off such partnership include leadership, assessment, formalization, execution, legislation, modeling and mentorship.

“For collaboration between States to be successful, there must be commitment and leadership from the top. This will ensure the elimination of unnecessary bureaucracy, corruption and red tapes,” Taiwo pointed out.

On barriers to success, Phillips Consulting stated that for any collaborative agreement between States to be successful, there is a need to first identify, plan for and then mitigate all potential barriers to the success of the agreement.

“For the LOPA, a number of challenges have been identified such as overbearing control of critical policy by the Federal Government (States being almost powerless to fully determine their future), border management issues, poor infrastructure in border towns, flooding, inadequate data on residents and migrants, and insecurity. Although there are plans to mitigate these identified challenges, it is pertinent to note that these issues have to be monitored as they unfold to be able to continuously improve on all proposed solutions,” Taiwo said.