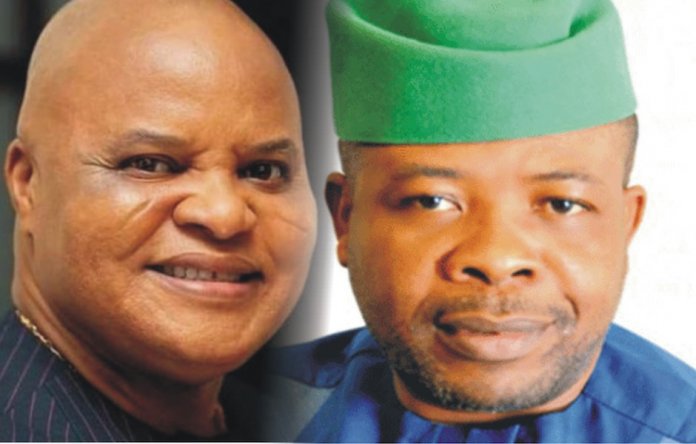 The legal battle between the candidate of the All Progressives Grand Alliance (APGA) in the March 9, governorship election in Imo State, Senator Ifeanyi Araraume and Governor Emeka Ihedioha has moved to the Court of Appeal, with Araraume asking the court to set aside the judgement of the Imo State Governorship Election Petition Tribunal, which upheld the election of Ihedioha as Imo State Governor.

The three-man panel of the tribunal had in a unanimous decision delivered on September 21, held that Ihedioha was lawfully declared winner of the governorship election by the Independent National Electoral Commission (INEC).

The tribunal chaired by Justice Malami Dongondaji, had in the judgement dismissed Araraume’s petition for lacking in merit on the grounds that the petitioners failed to prove allegations made in their petition.

Araraume and his party, APGA, had in their petition argued that Ihedioha did not obtain the constitutional one-quarter of the votes in at least two-thirds of the 27 local government areas of the state, in line with Section 179 of the Constitution.

They had in addition alleged massive Irregularities, hijacking and diversion of electoral materials and substantial non-compliance with the Electoral Act.

But the tribunal in its judgement held that the case of the petitioners was unmeritorious because they failed to call relevant witnesses and that evidence of witnesses called was based on hearsay.

The tribunal in addition rejected documents tendered by the petitioners in support of their claims on the grounds that those who led evidence in the documents were not the makers of the documents.

“The petitioners failed to proffer cogent, credible and sufficient evidence to entitle them to the reliefs sought in paragraph 30 of the petition filed on the 29/03/2019,” the tribunal held.

Not satisfied by this decision, Araraume and his party had approached the appellate court to upturn the decision of the tribunal on the grounds that the lower court erred in law, when it arrived at the decision that the case of the petitioners lacked merit and accordingly dismissed it.

The appeal, which is predicated on 22-ground was filed on behalf of the appellants by their lawyer, Awa Kalu, SAN and is challenging the entire decision of the tribunal.

In ground one of the appeal, Ararume and his party submitted that the tribunal was misdirected in law when they held in reference to the PW1 that “he did not state his professional skill and how long he has practiced…”.

According to the appellants, the tribunal in this case failed and neglected to consider the qualifications of the witness, which were contained in his witness statement on oath, which he adopted in the course of trial as his evidence in chief.

They submitted that the summary rejection of the analysis of the witness led to a miscarriage of justice having regards to the fact that PW1 teaches at a tertiary level and there was no competing or opposing analysis. “An analysis based on Form EC8D, which was not disowned by the 1st respondent (INEC) cannot be ignored”, they said.

They also argued in ground two that the tribunal erred in law when it concluded that Forms EC8A, EC8B, EC8C, and EC8D, which were tendered from the bar by the appellants’ lawyer during the examination-in-chief of PW4 are inadmissible, having not been tendered by the maker.

According to them, the tribunal failed to consider that the said documents are public documents which are carbon copies of the original and as such can be tendered from the bar upon mere production.

“The electoral forms which were tendered by the petitioners were all duly certified by the 1st respondent and such documents would normally speak for themselves.

“The 1st respondent statutorily is the father of the makers of the documents as tendered and having not disowned them, the documents could not be rejected as not being tendered by their makers.

“The tribunal ignored the fact that the electoral forms aforesaid had in accordance with others made after pre-hearing been tendered from the bar and were duly identified by the PW4 and tied to relevant paragraphs of his witness statement on oath”, they argued.

In ground three of the appeal, the appellants insisted that the tribunal erred in law when it held that, “it is clear that the evidence of PW4 is pure undiluted hearsay from the beginning to the end”. It is the argument of the appellants that the tribunal failed to recognise the fact that the petitioners’ polling agents who relayed information to the PW4 are agents of a disclosed principal and had a duty as authenticated field representatives of the PW4 to transmit reports to him.

In ground six, the appellants also claimed that the tribunal misdirected itself in law when it held that, paragraph 20 of the 2nd respondent (Emeka Ihedioha) reply filed on April 24, is not, “an admission to invalid votes irregularities, no witness(es) were called to prove the said paragraph, it is therefore deemed abandoned. Besides, it is the petitioners who are alleging Irregularities, it must be proved by eye-witnesses to the irregularities and how same affected the result in favour of the winner”.

In faulting this decision, the appellants claimed that the tribunal lost sight of the testimony of DW7 under cross examination wherein the witness admitted that the 3rd respondent (PDP) conceded to irregularities in 15 local government areas in the state during the March 9 governorship election.

“Having admitted the irregularities pleaded by the 3rd respondent, the petitioners had no further responsibility to prove same”, they submitted.

Another ground on which Araraume and APGA are seeking the nullification of the tribunal’s judgement is the decision of the panel not to consider the case of the respondents because the petitioners according to the tribunal, did not establish a prima facie case to warrant the shift of burden of proof to the respondents.

They further alleged that the tribunal erred in law when it failed to consider either wholly or entirely, the petitioners claims as spelt out in paragraphs 30 (d), (e) and (f) of the petition thereby leading to a miscarriage of justice.

Similarly, they submitted that the tribunal erred in law when it held that the petitioners claimed declaratory reliefs and accordingly the petitioners exclusively bore the burden of proving the facts pleaded in the petition and must rely on the strength of their case and the weakness of the cases of the respondents had to be overlooked and ignored.

“The learned trial Judges of the lower tribunal erred in law and occasioned a miscarriage of justice, when they held at page 62 of the Judgment that the alleged non-compliance occurred in 19 out of the 27 Local Government Areas of Imo State thereby rendering the votes from those areas invalid or unlawful.

‘’To prove this allegation of non-compliance the petitioners relied on the evidence of PW4. PW 4 is the 1st petitioner himself. He made four witness statements on March 29 and May 6, respectively.

‘’It was shown earlier in the judgement that the witness depositions of May 6 were pleading and not evidence and therefore do not avail the petitioners. The deposition of March 29 is also a duplication of the petition.”

While in ground 17 the appellants sought the nullification of the tribunal’s judgement on the grounds that it was against the weight of evidence, the appellate court for an order allowing the appeal and “setting aside the decision of the Governorship Election Petition Tribunal in petition number EPT/GOV/IM/03/2019, made on September 21, 2019.

They also asked for an order of the Court of Appeal for the 1st respondent to conduct a fresh Governorship Election in Imo State within 90 days in compliance with the Electoral Act 2010 and the 1999 Constitution of the Federal Republic of Nigeria.”