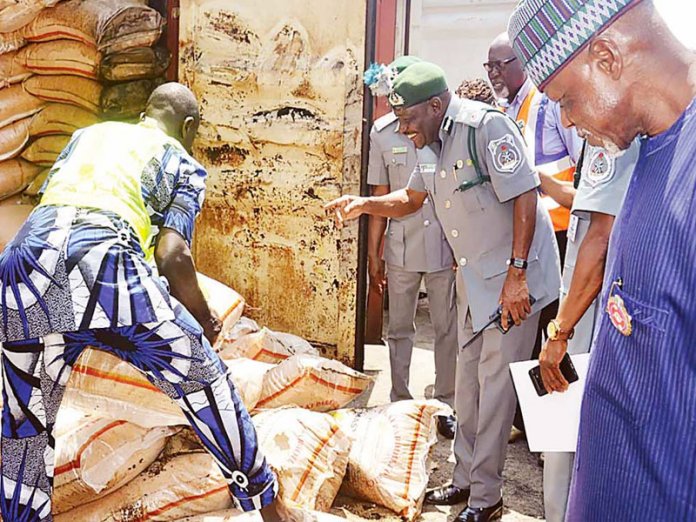 A recent claim by the Nigeria Customs Service that it seized 33 containers of rice from Masters Energy, whereas the seizure was made in 2016 shows that several other claims of seizures made by the service over the years leave much to be desired, writes Eromosele Abiodun

As customary to Nigeria’s security services, the Nigeria Customs Service paraded containers of rice it claimed to have seized last October. Customs’ Comptroller-General, Col. Hameed Ali (retd), while parading 54 containers of spoilt rice and other commodities, including fake pharmaceutical products and vegetable oil worth about N2.7 billion in Lagos, said: “One significant finding about this seizure is that all the rice have expired or about to expire.”

The retired army colonel claimed the rice was re-bagged as local products, though they were from China and Thailand.
A closer look at the bags shows that they bore Masters Energy with GRA Ikeja, Lagos and another, Dr. Chang by Yunfei International Trading Co Limited in Jabi, Abuja as companies and addresses, respectively.

However, as the dust had yet to settle over the claim by the customs that 33 of the 54 containers were rotten rice, the issue drew the ire of industry stakeholders and observers, who maintained that the rice was seized in 2016 and had rotten in custody.
Ali had while addressing journalists in Lagos on Tuesday stated that 33 containers of expired and spoilt rice, alongside 11 containers of unregistered pharmaceutical products, two containers of used tires, four containers of refined vegetable oil in retail packs, were seized at the Tin-Can Island ports by the Tin-Can Customs Command.

Masters Energy Commodities Trading Limited and others would be investigated over connections to the seized expired bags of rice, he had threatened.

“One significant finding of this seizure is that all the rice are expired or about to expire. Also remarkable is the seizures of Tramadol variants and unregistered performance-enhancing drugs among the pharmaceutical.
“You will recall that in the past, the service has raised the alarm and drew the attention of the general public to the fact that most of the imported rice is expired.

“Some of the rice allegedly imported from overseas had Nigerian addresses, and the service will be going after these addresses to investigate their connections to the importation of these expired rice. Some of the addresses include Masters Energy Commodities Trading Limited located at 31A, Remi Fani-Kayode Street, GRA, Ikeja, Lagos and 103, Ebitu Ukiwe Street, Jabi, Abuja. We will be going after these addresses and investigating their connections with these expired bags of rice in 33 containers.

“I want to commend officers and men of the Tin-Can Island Port Command of the NCS for a job well done. I am also aware of the commands contribution to the Service revenue collection drive. Statistics in my office shows the command has so far collected N286,742,551,443.00 from January 2019 till date. I, therefore, urge the Command to keep up the good work and possibly surpass its target,” explained the Customs boss.

Seizure That Never Was

However, a source in Masters Energy told THISDAY that the product was impounded in 2016, wondering what the Customs hoped to achieve by parading same items as imported spoilt goods three years later.

THISDAY learnt that Masters Energy Commodity Trading Limited had without being compelled to, petitioned the House Committee on Customs Excise and Tariff, that its agent made false declaration in order to cut tariff for the 30 containers of rice. It had also indicated willingness to pay but the NCS curiously turned down their request.

The letter, signed by the then Managing Director, Mr. Chukwudi Otigba, said: “Sometimes in May 2016, we entered into a business transaction with a Thailand company known as Asia Inter Trade Rice Export Co Limited, for the importation of 30 containers of Thai Parboiled Rice to be delivered at the Tin Can Island Port, Apapa, Lagos as contained in the bill of laden.

“We contracted Destiny Impex Limited, a clearing company registered and licensed by customs with registration number…. As our clearing agent to clear the 30 containers of rice in accordance with Customs tariff and classifications.”

During the parade of the seized containers last week, Ali neither mentioned when the consignment was intercepted nor who imported the rice, as all efforts to ascertain the date of interception proved abortive.

This, analysts asserted, was deliberately done to make it look like the closure of the border was yielding positive results.
In a swift response to Customs’ claims, lawyer to Masters Energy, Monday Ubani, said there was no truth in Ali’s claims.

Ubani stated, “I do not know how many of you listened to this piece of news yesterday in various television channels and radio stations where the Comptroller General, Retired Col Ahmed Ali, showed 54 containers of spoilt rice and other commodities including fake pharmaceutical products and vegetable oil allegedly worth 2.7 billion Naira in Lagos. According to him “One significant finding about this seizure is that all the rice have expired or about to expire”. The retired army colonel said that the rice was re-bagged as local ones even they were coming all the way from China and Thailand. There is no single truth in what Col. Ahmed Ali was trying to make the whole world to believe in the said press conference.

“If you Google, you will find out that sometime in 2016 it was widely reported in the news that about 30 containers of rice belonging and imported by Masters Energy Commodity Trading Limited through Nigerian port, Tin Can Island, Apapa were impounded for failure to pay the correct tariff when clearing them by the Customs’ licensed agent. It was even reported that Masters Energy then petitioned the House Committee on Customs, Excise and Tariff that its agent Messrs Destiny Impex Limited, a clearing company registered and licensed by the Customs made a false declaration in order to cut tariffs for the 30 containers of rice.

“The company indicated willingness to pay the correct tariff as the agent was paid full money but decided to cut down the tariffs in order to avoid paying full value of the tariffs. This request was turned down and the company was later informed through anonymous source that the same rice had been shared to the internally displaced persons’ homes in northern Nigeria. It is important we point out here that this parboiled rice was purchased from Thailand from a company known as Asia Inter Trade Rice Export Co, Limited with a disclosed address and there is bill of lading to that effect.”

Ubani added: “We have letter from Customs Authority asking Masters Energy to seek the approval of Central Bank of Nigeria before they could clear the remaining rice. These events took place in 2016.
“The issues begging for questions really with this emergency press briefing by the retired colonel are as follows: Why was it convenient for the Comptroller General to withhold the date of the said interception? These containers belonging to Masters Energy was impounded since 2016.

“What point did the comptroller-ceneral of Customs want to achieve by this emergency press briefing in 2019 over a seizure that was made in 2016 and already in the news? Is it to prove to the gullible Nigerians that Nigerian Customs Service that is under ‘heavy fire’ for its excesses is really working and saving Nigeria’s economy?

“What was also intended to be achieved by saying that the rice has expired or about to expire when it failed to disclose when the seizure was done and whether the life span of rice was supposed to be forever?”
Continuing, he said, “That Nigeria should clap for the comptroller-general, who has wasted such quantity of rice that should have been donated to the internally displaced people in Nigeria, who are dying of hunger every day? Why do we choose to run government by sheer propaganda in this Internet age where lies and falsehood can easily be detected by discernible minds?”

The NCS seems to like controversy. This is because before the disputed seizure was announced last week, a directive by the customs management in Abuja had unsettled shipping agents and stakeholders in the maritime sector,

The CG of Customs had recently directed that 100 percent examination should be conducted on cargoes destined for inland ports in the country including the Kaduna Inland Dry Port (KIDP).

He said: “All importation are to be unsealed, opened, examined to ascertain the contents and resealed before exiting the mother port. Such consignment shall be escorted by the FOU Escort Personnel to their various destinations without compromise.”
But shippers and importers in the country, who have benefited from the services of these inland ports, especially KIDP, raised concerns over the order saying it negates international best practices.

The stakeholders, which also include freight forwarders, asserted that the directive would amount to multiple screening or examination of cargoes meant for the inland ports since officials of federal agencies such as the NCS are also at the dry ports to carry out proper examination of the cargoes.

Speaking on the matter, the President of Association of Nigerian Licensed Customs Agents, Tony Uju Nwabunike, cautioned the NCS, saying that such a directive will affect trade facilitation.

He said: “I think we (ANLCA) should look into the principles and guidelines that cover transit cargoes to see if it is proper, but we will send a position to the government through the Customs on the issue.

We think if there is any reason to take that decision, they should go through the principles of import guidelines as they affect dry ports.

“So many of our members that are into exports have said if that is the case, there is no need for a second examination of cargoes. The Customs, from the grapevine, said they just want to open to know what is inside the containers and re-seal them. But whichever way it is, it will be much clearer in a number of days now.”