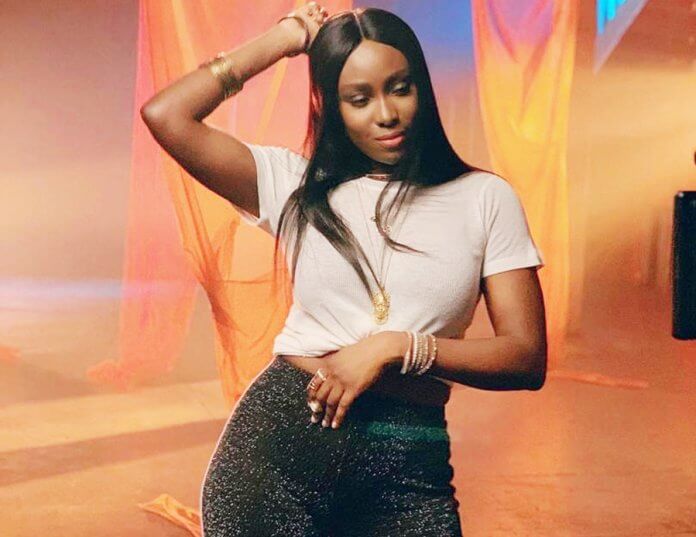 Talented singer/songwriter Tolani Otedola comes through with a video to her new single titled, “Maybe Baby.” The R&B tune shows the Afropop artiste and first daughter of billionaire businessman, Femi Otedola, lay down her soothing vocals over a calming instrumental in the new work. Ferdinand Ekechukwu reports

After three successive releases upon her entry into the music scene, with an EP in the making, Afro-pop singer Tolani Otedola (Tolani) has released a new single titled, Maybe Baby. This new song, prior to its release, premiered on the PGM Radio Show on Wednesday October 23 when the singer stopped by the Push Good Music Club to pay tribute to one of her music icons, Sade Adu on her 60th birthday. “Maybe Baby” is a sultry urban R&B record which showcases Tolani’s gifts as a singer and songwriter.

The song finds a “madly in love” Tolani detailing her romance with her love interest as she points out all the moves she wants him to pull on her. Tolani followed her new song with the video which was released Friday October 25. The singer/songwriter expresses her talent and voice effortlessly in the song. Remarkably, Tolani is doing her thing differently and boldly so in the music industry as much as she is very promising.

The singer lays down her soothing vocals over a calming instrumental in the accompanying visuals, directed by Mollana Burke – A JM Films Production turned out quite illustrative. The performance visuals to the beautiful R&B tune was highlighted with a male model to help visualise the lyrics. The sound reminisces one of the likes of Americas 90s R&B pop sensations Brandy Norwood and Monica Brown.

Tolani strikes an emotional cord on this lovely record as she sings from her heart for a wished love. The love thing is beginning to “enter,” after all – as we say in Nigeria. With Maybe Baby could be the hour of agreement for the Nigerian singer who appears to be telling a series of love tales. This is a follow-up to her duet with former Mavin star Reekado Banks, titled ‘Ba Mi Lo’, which means “Come with me”, the romantic song speaks on how everyone has had that person he/she is obsessed with but not sure if the feeling is mutual.

‘Ba Mi Lo’ song was inspired and written from a point of personal experience, as the singer once said there was once somebody she waited that long for but he messed up. Back in April, Tolani had dropped the single Liar. Now, apparently, the “Liar” is out of the picture and the songstress – as in the persona in her latest song – is thrilled. So, “Maybe Baby.” Her songs are very personal. Tolani likened her forthcoming body of work in form of an EP to a diary containing personal experiences which she would love to share with her fans.

It is therefore not surprising the singer communicates realistic situations through music. Lagos born, London bred, Tolani takes influences from her multi-cultural upbringing which she focuses into a unique sound that speaks to a wide range of music audiences, which is evident in her music. The pretty young lady learnt the rudiments of music in England and having completed her education, decided to take her music to the next level in Nigeria in 2017 with her debut single tiled, “Tenderoni,” featuring Skales.

Tolani has performed on many stages, including a pivotal set at the 2018 Lagos Fashion and Design Week and Pepsi’s Rhythm Unplugged.  A bit reserved, Tolani had announced during her introduction to the Nigerian music audience that, “Generally, I call my sound Afro-pop. I look at what is trending and incorporate it into my sound.” Tolani’s first set of musical releases are a blend of infectious African rhythms and soulful harmonies that offer its listeners a feel good-factor. Tolani is the first daughter of oil mogul, Femi Otedola.

According to her, “I was born into music; I love music even as a kid in school, church and any opportunity to sing. My family is very musical, a household where there is always music playing namely Fela and Patra. My parents love music, my father especially.” Her musical influence drawn from a wide range also credits her hometown heroes Fela Kuti, Asa and Sade Adu, to artistes like The Pray, Aerosmith, Tracy Chapman, and Snoop Doggy.

For Tolani, who has a diploma in Music and Master Performance from Tech Music Schools in London, some of her earliest memories were the times she spent in the car with her father playing loud music. “I think that was one of the reasons I fell in love with music. Even though my father is not a musician, he loves music. We grew up in a house where music was always played.” Prior to her diploma in music, she studied Psychology in her first and second degree at the University of St. Andrews in Scotland.

A rising star, Tolani, has been quietly building a music career over the past few years. The first of the Otedola’s three daughters has always wanted to do music even before she went to the university.  “My parents encouraged me to keep my passion but they wanted me to complete my university education first. They wanted me to have an alternative source of livelihood. We all know that anything that has to do with creativity is not guaranteed; so, you should have a plan B just in case things don’t work out as planned.

“I am glad that they raised me that way. Once I was done with my university education, they allowed me to pursue a career in music. Music is where my heart belongs. I have always been artistic and I used to be a choir member in school and church. However, I have not thrown away the business brain I inherited from my parents. For an artiste to become successful, he or she must be a good business person as well.

“The fact that you have not heard much about me was intentional. I was in the university and I went to music school too. I had to learn how to play instruments and how to write music very well. I also sang at gigs in the UK and got paid. Over there, that is how it works; you don’t just wake up and say you want to be a musician. You have to pay your dues. When I was at the university, I was in a band of four. I have been recording for years because I have a studio at home.”

Tolani says she will never take it personally if anyone attributes her success to her father’s fame: “If you tell me I am taking advantage of my father’s fame, I will not argue with you. I have already accepted that people will form their own opinions about me and I don’t intend to fight it. I will try to work hard and hope that my music speaks for me.

“It’s a mistake for people to think that since we were born into a wealthy home, we don’t need to work for anything. My father takes care of us, but his money is not ours. Parents like to support their children, but I don’t think they want us to depend on them forever. One day, my parents will not be around again and I will need to take care of myself.”

Billionaire Femi Otedola, is blessed with four children, three daughters and a son. His three daughters are involved in the entertainment industry. Florence is DJ Cuppy, Temi is a fashion entrepreneur/video blogger and Tolani, is a singer/song writer.