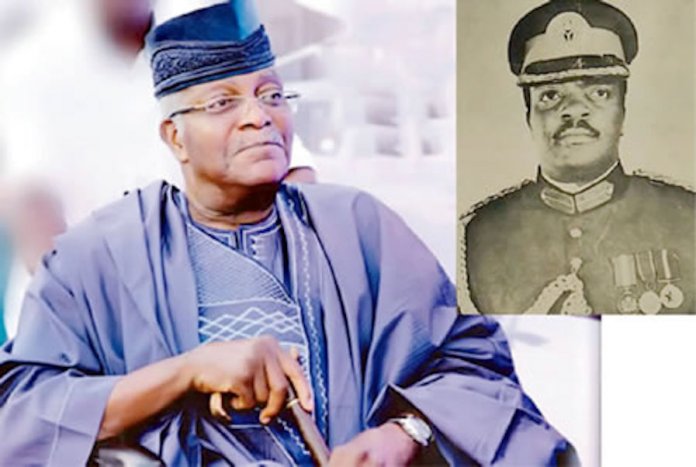 The harsh reality of death as the predictable end of every mortal was driven home by Williams Shakespeare in one of his enduring works, ‘Julius Ceaser’, in the following words:     “Cowards die many times before their deaths; The valiant never taste of death but once. Of all the wonders that I yet have heard, It seems to me most strange that men should fear; seeing that death, a necessary end, will come when it will come”.

Death is certainly an integral part of human existence. Either by spiritual insight or medical diagnosis some know ahead of time about the imminence of their death. But for others, deaths come so suddenly, tragically and at times so painfully.

This same death, which Shakespeare describes as a necessary evil, finally caught up with Brigadier- General Mobolaji Johnson (rtd) on Wednesday, October 30, 2019 at the age of 83. Johnson, the first Military Governor of Lagos State (1967-1966), reportedly died after a brief illness.

His death has since been described as a great loss to Lagos State and indeed the country as a whole. Lagos State Governor, Mr. Babajide Olusola Sanwo-Olu described the deceased as a dedicated Lagosian with massive contributions to the development of Lagos State in particular and the nation as a whole.

The departed illustrious son of Lagos was a constant source of support and inspiration to subsequent governors of Lagos State, especially from 1999 till date. He was always willing to offer his wise counsels and experience whenever the need arises. Even while it was obvious that his health could not really support such rigorous endeavour, Johnson was a regular feature at every major Lagos State government ground-breaking events since 1999. Such was his commitment to the cause of Lagos State, and that is the exact reason why he would be sorely missed.

What is, however, soothing is that Mobolaji Johnson passed away at the ripe age of 83, having served God and humanity in various capacities and fields. A great administrator and rare humanist, Johnson touched and transformed several lives through his life of selfless service and industry. He was a symbol of decency, humility and integrity. His life epitomised the virtues of honesty, fairness and justice.

As the first military Governor of Lagos State, he discharged his mandate equitably with remarkable dignity. His indelible record of service remains intact. The “Centre of Excellence” that we proudly proclaim today is a product of his vision for Lagos State when he conceived several landmark programmes and projects for the newly created state.

Even in death, the story of the development of Lagos to a model megacity cannot be told without a mention of this unassuming and worthy leader. Some of the impactful projects he executed as governor are still visible and have definitely outlived the man who did them.

In the realisation that Lagos State is the most populous and leading state in the federation, Mobolaji Johnson was determined to turn the state into the pride of the nation. The policy thrust of his administration was shaped by his faith in the creative capabilities and unbounded energies of the people, especially the masses. Thus, his early days in office clearly showed him as a man who brought resourcefulness, experience and dynamism to the task of solving problems that linger and hinder the progress of the people of the state.

Mobolaji Johnson was first appointed as the Administrator of the Federal Territory of Lagos on January 15, 1966 and later as Military Governor at the creation of the state on May 27, 1967. He recorded considerable achievements during his tenure. His regime witnessed an increase in revenue of the state from N36.7m to N99.7m. The increase was largely due to the revenue allocation formula that had just been introduced and increased revenue from crude oil, which was partly distributed to the state governments.

Under his leadership, the state government generated the larger proportion of its revenue from Internally Generated Revenue (IGR). According to the government then, the IGR was known as, “sources under the control of the Lagos State Government”.

It was the Mobolaji Johnson administration that began the construction of Ikorodu and Mushin General Hospitals. It also modernized the General Hospital, Lagos, by building the new mortuary block, physical medicine department, sewage treatment plant and installation of a standby generator. The administration commissioned the nurses hostel, doctors flat at Marina, Isolo and Harvey Road Health Centres.

Also built by the administration was the maternity annex at Onikan Health Centre and additional ward at Igbobi Orthopedic Hospital. It equally opened five new Government Colleges in each of the five divisions of the state.

The Johnson administration introduced the harmonized teachers’ salaries and conditions of service to enhance the status of the profession and commenced the implementation of the Universal Primary Education (UPE).

The administration equally completed projects under the Lagos Water Supply phase1 Expansion Programme and designed the Ojo Water Works as an alternative to Iju Water Works, to serve Ojo and environs. Other strides of the administration are: construction of the Victoria Island Sewage Scheme for Ikoyi, Lagos Island, etc.; introduction of the  regulations for motorcyclists to wear crash helmets; introduction of Traffic Courts; establishment of Agricultural Extension Works Stations; construction and commissioning of the Government Printing Press at Isheri road in Ikeja; and so on.

A diligent and dedicated military officer, Mobolaji Johnson began his military career at the Zaria Military Depot from 1958 to 1959. He was a member of the United Nations Peace Keeping Troops, Congo between 1960 and 1961. He was promoted as 2nd Lieutenant in the Nigeria Army in 1961 while he became a Captain in October 1962.

Having played his part in the stage of life, one could only wish him eternal peace at the bosom of the Lord.

Ogunbiyi is of the Lagos State Ministry of Information & strategy, Alausa, Ikeja