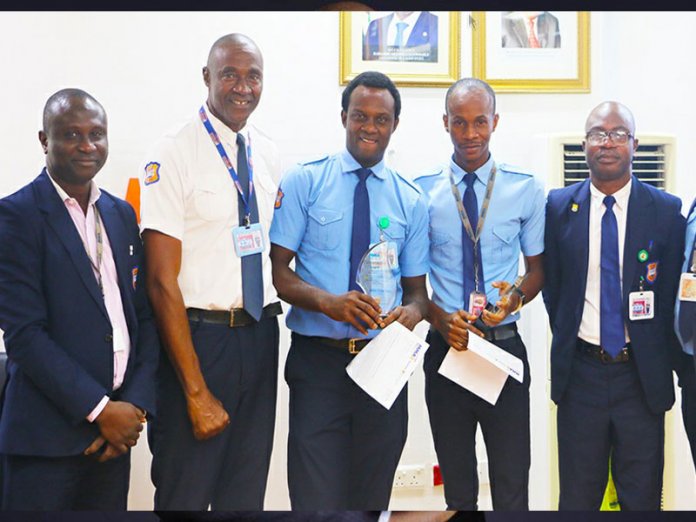 According to a statement by BASL, one of the said employees, Mr Babatunde Ajala, was deployed to work at the Departure entrance 2 on Friday, April 12, during which he sighted an unaccompanied brown leather bag.

Out of curiosity, he picked up the bag having realised the owner was nowhere to be found. After close examination, a sum of N300, 000, two iPhones, one iPad and some complementary cards were found in the bag. He promptly escalated the matter to his supervisor who in turn swung into action.

The statement said the owner of the luggage was later identified to be one Mr. Herbert O. Akindolire, an Accountant-General in Ondo State. He was contacted and thereafter summoned to confirm the ownership and content of the bag.

Akindolire, who before that time was worried because he had searched everywhere for the bag, was elated on learning about the discovery and he extended his gratitude “for the sincerity of the staff and the professional way the whole matter was handled by BASL security management team.”

Also in a related development, on Saturday, April 6, 2019, another passenger who was scheduled to travel with an Abuja-bound Dana Airline had his phone missing.

“But the timely intervention by another BASL AVSEC staff, Henry Akhile, saved the day for the traveller. After the affected passenger raised the alarm, Akhile promptly responded by carrying out comprehensive CCTV playback.

“The perpetrator was summarily apprehended, with the phone retrieved from him and handed over to the owner in a timely manner such that his flight schedule was not disrupted. The culprit was eventually handed over to the police for prosecution,” the statemnet added.

Bi-Courtney commended the two officers for their honesty, responsiveness, particularly the way the two incidences were handled.
Head of Human Resources, Mr. Ayoola Ajayi noted that BASL frowns upon acts capable of causing undue confusion in and around the terminal, noting that the two employees have proven to be worthy ambassadors for their display of maturity, sincerity and professionalism at their respective duty posts.

He lauded other members of the team for doing the company proud through their conducts, and for making the moments count for the affected passengers.