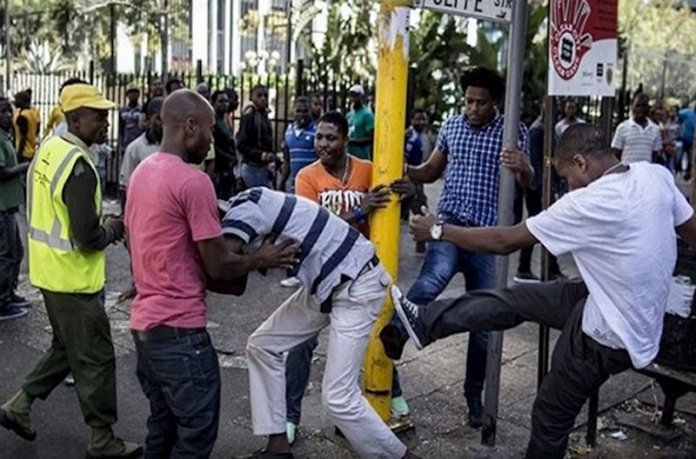 The Nigerian community in South Africa has again been thrown into mourning following the killing by unknown gun men of one of its members who also left two others injured.

This is coming as a former Deputy President of the Senate, Senator Ike Ekweremadu, has taken the case of the disturbing wave of xenophobic attacks to the October Session of the International Parliament for Tolerance and Peace (IPTP) holding in Ethiopia.

The national Spokesperson of Nigerian Union in South Africa, Mr. Odefa Ikele, disclosed the latest incident to the News Agency of Nigeria (NAN) yesterday in Lagos.

Ikele said the incident that led to the death of Mr. Chikamso Ufordi, who hailed from Awgu Local Government Area of Enugu State and injuries sustained by the two others happened at about 7 p.m. on Saturday, October 26, in Nigel.
Nigel is a small gold mining town in Gauteng Province, East Rand near Johannesburg.

“One of the witnesses informed us that the deceased, Mr. Chikamso Ufordi, from Awgu LGA in Enugu State, was trailed by some unknown gun men, and was shot point blank while in his car with two other Nigerian friends.
“His friends also sustained injuries, but the late Chikamso died immediately before help could arrive from the province’s Emergency Medical Services (EMS) team.

“The injured were rushed to the nearest hospital. A case of murder and attempted murder have already been opened at Nigel Police Cluster,’’ Ikele told NAN on telephone.
It will be recalled that three Nigerians were among other foreign nationals who on October 22, suffered from fresh xenophobic attacks on foreigners in different locations of Witbank, Mpumanlaga Province, South Africa.

The October 22 attacks came on the heels of efforts by Presidents Muhammadu Buhari and Cyril Ramaphosa to ensure they found amicable and lasting solution to the xenophobia in the latter’s country.

Meanwhile, Ekweremadu, has taken the case of the disturbing wave of xenophobic attacks to the October Session of the International Parliament for Tolerance and Peace (IPTP) holding in Ethiopia.

Speaking yesterday at the opening plenary of the parliament in the Ethiopian capital, Addis Ababa, Ekweremadu, who chairs the Legal and Legislative Affairs Committee of the IPTP, urged the Parliament to pay special attention to problem of xenophobic attacks on the African continent.

According to a statement by his media aide, Uche Anichukwu, Ekweremadu said, “Since we are holding this session in Africa, permit me to mention the issue of xenophobia, a development that worries me. There is a growing trend in acts and incidences of intolerance, which is destroying the brotherhood, peace, and mutual relationship among the people of Africa. As a special Parliament focusing on tolerance and peace, we will not close our eyes to the cases of xenophobia wherever it exists.

“I also appeal to our brothers and sisters in Africa to not only continue to tolerate, but to also respectfully accept one another as one people with a common destiny”.

The former Speaker of the Parliament of the Economic Community of West African States, ECOWAS Parliament, however, commended the Prime Minister of Ethiopia, Ahmed Abiy, not only for his efforts at promoting tolerance and peace in the East African nation, but also for ending Ethiopia’s 20-year hostilities with Eritrea.