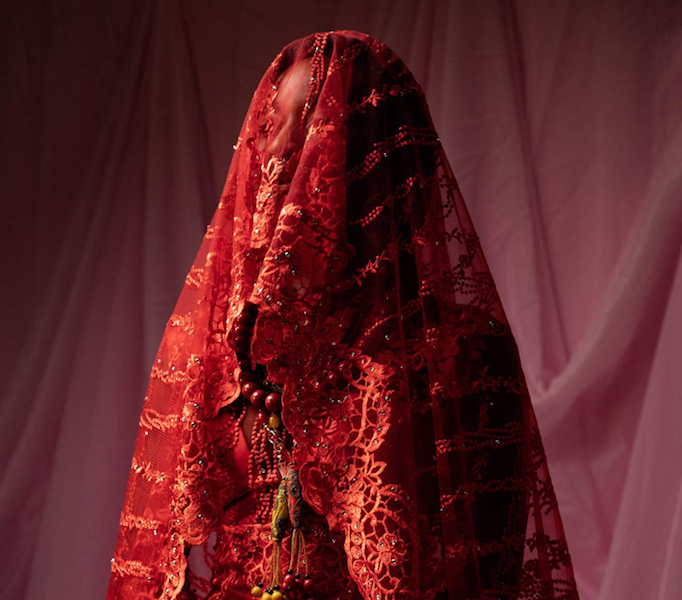 Recognised by the British Journal of Photography as one of the top 25 photographers of 2015 in the talent discovery series, “Ones to Watch”, Lakin Ogunbanwo is a fashion-forward photographer and a versatile artist who launched his career with the 2012 project, Are We Good Enough’, and in 2013 with the solo show, Portraits by Lakin Ogunbanwo. The 2012 project is an on-going one that keeps expanding the contemporary African visual narrative. Through this series, he documents hats worn as cultural signifiers by the various ethnic groups in Nigeria.

Inside the Niki Cryan Gallery in Ikoyi, Lagos, he seemed to be in a moment of self-appraisal of his works that lined the white walls when his reporter-guest walked in a few hours before the opening. The show is a presentation of Ogunbanwo’s two photographic series titled “E wa Wo Mi” (meaning Come Look at Me) and “Are We Good Enough?”.

The 32-year old artist studied law at Babcock University and Buckingham University, England before working as a fashion photographer. He has produced some video art and in future, he will experiment with mixed media.

“Commercially, I work as a fashion photographer,” he said. “The art side is very informed by my fashion background. I have worked with lots of fashion brands and I do portraits as well. Aesthetics is very important to my visual storytelling.
“I think when I started to deliberately use the art to express my self was sometime in 2012 when I started shooting the hats for the ‘Are We Good Enough Series’. We live in a global village and topical issues in America resonates here. I decided to engage with different ideologies happening around the world and see through a Nigerian prism. Through the series, I try to challenge the idea of masculinity and what it means to be a man. I try to explore the idea of masculinity through what we wear. We know that what we wear means a lot of things to us. I want to use these hats as a sort of conversational starters as to who are these and how do they see themselves when they wear it.’’

The hats in the pictures came in different colours and sizes. The manner in which each piece is worn speaks volumes about the character of the wearer. For instance, the one titled, “I was Gonna Cancel’’ seemed to be inspired by the idea of men ghosting women. Ogunbanwo offered more insight on this series with intriguing titles.

“It is me taking my culture and slapping the contemporary world-view into it,” he continued. Meanwhile, the series, “E Wa Wo Mi’’ takes an almost panoramic look on the culture of marriage ceremonies in Nigeria from the point of view of the brides who have diverse ethnic backgrounds that have been blurred by shared experiences.

“I am doing this as an observer. I am not a woman. I don’t know what it means to be a bride. But I have an idea of what some of these women go through that day and the rest of their lives as mothers and wives. It is just me taking very relatable cultural aesthetics to give contemporary meanings,’’ he said.

Highly influenced by the older generation of photographers in Nigeria such as J. D. Okhai Ojeikere, Ogunbanwo loved the organic nature of their photography. Perhaps, this explains how he sources for his own materials to assemble a visually appealing collection in this show that runs till November 3.

“I have a plethora of hats. I bought some, I collected some from friends and I go to Nike Art Gallery to get some. I wear some of them,’’ he said.

Ogunbanwo’s show is a visual juxtapose of masculinity against a near-baroque styled feminine portraiture that unwittingly conveys a powerful statement on the unblemished African world view on gender.

FIRS Grants One Week Extension for Companies to File Returns