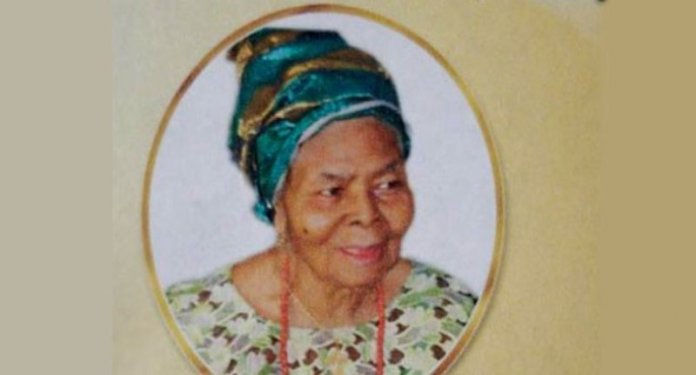 The first Nigerian Female Science graduate, Lady Deborah Jibowu, has died. Jibowu died at the early hour of Saturday at the age of 95.

The Ido Ile Ekiti, Ekiti West Local Government Area of the state born Jibowu graduated from the University of Manchester, United Kingdom, in 1947.

The state governor, Dr. Kayode Fayemi has commiserated with members of the immediate family of the late Lady Deborah Jibowu and the Fasanmade family of Ido-Ile Ekiti on the passing of their matriarch. She was aged 95 years.

Jibowu was reputed for being the first Nigerian female science graduate, having graduated from the University of Manchester, United Kingdom in 1947 and was a recipient of Member of the British Empire (MBE) in 1962 and Officer of the Order of Niger (OON) in 1965.

Fayemi, in a statement by his Chief Press Secretary, Mr Yinka Oyebode, described the late Lady Jibowu as an illustrious daughter of the Land of Honour and a patriot who served her fatherland diligently and made Ekiti proud through numerous achievements.

He described the late Jibowu as a frontline educationist, seasoned administrator and impactful community leader who lived a life of service to God and humanity.

Fayemi hailed the contributions of the late Jibowu to national development, noting that as National Commissioner, Girls’ Guide (1960-1980) and later Chief Commissioner ((1991-1997), the deceased invested her time and resources in moulding the lives of many young females across the country in addition to coordinating many professional and civil society groups, including the Red Cross Society, National Council of Women Secretaries, National Youth Council and Education for All NGO Network among others.

He said despite her royal and privileged background, Jibowu invested her time, energy and resources on many laudable initiatives that impacted positively on the people, especially the girl child.”

“For us in Ekiti, this is a huge loss. Mama Jibowu was an exemplar. She made great impact in almost every aspect of life after setting the record as the first Nigerian female University graduate in the sciences in 1947. She remained a source of pride and inspiration to generations after her.

“Though we shall miss her wise counsel and positive disposition, but we are comforted by the fact this great nationalist lived a good life and left behind a legacy of honour. She remains our pride in Ekiti”.