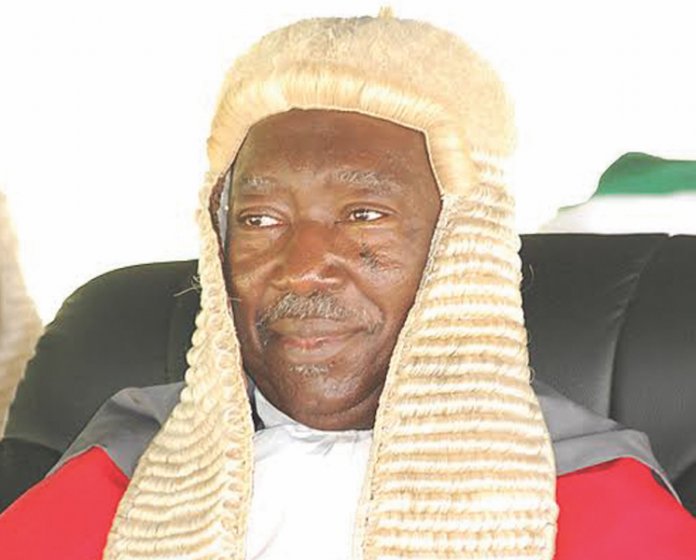 The role played by the Chief Judge of Kogi State, Justice Nasiru Ajanah, in the impeachment of the former Deputy Governor, Simon Achuba, and the swearing-in of Edward Onoja as a replacement, will continue to resonate for a long time as ignoble, Davidson Iriekpen writes

Former Kogi State Deputy Governor, Simon Achuba, may have been impeached from office and Edward Onoja was sworn in as a replacement, but the role played by the Chief Judge of the state, Justice Nasiru Ajanah, in the entire saga would always remain a sour point in the whole drama that played out. To date, many observers are wondering why a panel set up by the chief judge to investigate Achuba would clear him of wrongdoing, yet he still went ahead to encourage his removal from office by swearing in another person as a replacement.

Recall that after the state House of Assembly levelled allegations of gross misconduct against the Achuba, Justice Ajanah was mandated to constitute a panel to investigate offences. Promptly, the chief judge set up a panel chaired by a Senior Advocate of Nigeria (SAN), Mr. John Baiyeshea. Other members of the panel were retired Justice S.S. Idalu, U.O. Onoja, E.I. Omuya, both lawyers, Rev. Z.O. Asun, Mohammed Ada Shuaibu, an engineer, and Dr. I. Ndagi Adamu.

While the allegations against Achuba ranged from financial misconduct to scandalizing the government and people of the state, the panel in its report titled: ‘Panel Investigating Allegations of Gross Misconduct against Deputy Governor of Kogi State: Report of Panel, Volume 3’, dismissed one after the other, the six-point allegations on the grounds that none of the charges against him was substantiated by the state House of Assembly.
This left many analysts wondering on what grounds did the assembly find the constitutional backing to remove the governor from office?

For instance, in hearing the petition, the Baiyeshea panel said it was guided by section 188 of the 1999 Constitution in considering the facts, evidence, regulations, laws and all materials placed before it, adding that, “the issue for determination was whether the allegations of misconduct against the deputy governor as contained in the notice of allegations of misconduct have been proved by the complainant”.

On the second charge, which bordered on deliberate disdain for the decision of the Kogi State Executive Council on the mode of execution of contracts between the state and third parties, the panel held that failure of the complainant to lead any evidence in that direction made the allegation deemed abandoned and is consequently not proved.
On the allegation of absconding from office and abandonment of official duties and functions, the panel also held that the allegation, like previous ones, was not proved.

In dismissing the fourth allegation, which bordered on scandalizing the state government, the panel held that the evidence by the complainant fell short of the required minimum standard of acceptable proof. Similarly, on the allegation that the governor ridiculed the state by making a public claim of his unpaid salaries, the panel held that failure of the complainant to present publication of his letters by his lawyers was fatal to the case. It stated that the complainant did not place anything before it to show that the claim of the deputy governor was not true.

In conclusion, the panel held: “In line with section 188(8) of the Constitution quoted herein before, we hereby report to the Kogi State House of Assembly that the allegations contained in the notice of allegations admitted in evidence by this panel as exhibit C7 have not been proved.”

Just like in Kogi, when attempts were made to impeach the then Governor of Nasarawa State, Tanko Al-Makura, in 2014 by the House of Assembly, the state’s chief judge set up a seven-man panel to probe allegations of gross misconduct levelled against him. At the end of the panel’s sitting, it cleared him of any wrongdoings.

Usman noted that the panel had during its inaugural sitting given the lawmakers a 24-hour window opportunity to appear and substantiate their case against the governor.
“The rule of natural justice and our criminal laws put the onus of proof on the complainant and failure to which the accused is deemed innocent.

“The House has failed to advance evidence on the allegations, therefore the panel agrees with the prayer of the governor’s counsel and has decided to dismiss the charges against the governor,” he stated.

Consequently, Al-Makura was saved and the impeachment process against him was dropped.
This is why observers are wondering why the Kogi chief judge would deliberately indulge in the illegality of swearing in a new deputy governor when the panel he set up did not indict or in any way order the removal of Achuba. They also wondered why the chief judge did not refuse to make himself available for the swearing-in by abiding with Section 188(8) of the 1999 Constitution which states: “Where the panel report to the House of Assembly that the allegation has not been proved, no further proceedings shall be taken in respect of the matter”.

An investigation by THISDAY revealed that when Achuba was impeached, the state government was faced with an uphill task of getting the deputy governor-designate sworn in as required by the Constitution.

Sensing that Justice Ajanah who had equally survived an attempt by Bello to remove him from office, is an adherent to the spirit and letters of the Constitution, there was suspense in the state over who will administer the oath of office on Onoja since it was difficult for the state government to approach him for the task. It was further learnt that they were even working on permutations on how to inaugurate Onoja without the chief judge.

Added to this, most of the judges were scared of getting sanctioned by the National Judicial Council (NJC) for acts considered to run contrary to the letters and provisions of the Constitution. Sources said some political forces started shopping for either an amenable judge or the President of the Customary Court to swear in the new deputy governor.
But how the chief judge finally succumbed to pressure remains a mystery. Even the chairman of the panel, Baiyeshea, was said to have expressed disappointment given the fact that his panel did not indict Achuba. He added that the action was a violation of constitutional provisions.

“This is the most bizarre thing that I have ever heard in my life. We submitted the report to the Speaker around 1p.m. and I left Lokoja for Abuja. I was at Gwagwalada area when one of the panel’s members who had not left Lokoja called to tell me that he saw it on television that the deputy governor had been impeached.

“As far as the report that we submitted to the House of Assembly is concerned, the committee returned the decision that all the allegations were not proved. What the constitution said by section 188(8) is that, ‘once the panel returns a verdict like that. No further proceedings can be taken on it,” Baiyeshea said.

This is why observers are calling on the NJC to ensure that Justice Ajanah is sanctioned for what they described as his “ignoble role” in the entire saga. Most senior lawyers who spoke with THISDAY on the condition of anonymity said it was a disgrace and desecration of the rule of law.

“I am just wondering how Justice Ajanah would feel if he heard that a suspect he discharged and acquitted in a case was taken to prison on account of the same case. This is simply how bad the impeachment saga is and it very unfortunate that the same him would allow himself to be used to swear in the new deputy governor when he knows that the former did not do anything wrong,” said one of the lawyers.
Pix: Ajanah.jpg