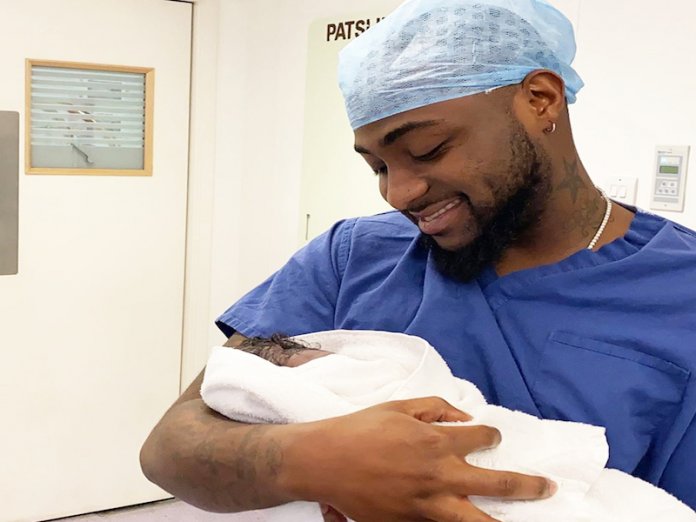 Singer David Adeleke aka Davido is still celebrating the birth of his first male child.  The baby with Chioma Rowland came just 31 days to his 27th birthday. Announcing the birth on his Twitter and Instagram handles, the pop star called his fiancée, Chioma, a strong wife. Visibly excited Davido posted a lovely photo showing him sweetly carrying the newborn in his arms with a smile on his face.

The “Fia” crooner also shared another video on his Instagram Story, holding his precious son David Jr. and saying, “What’s up son? What’s good boy? What’s up son? Hey my son here, my boy is here.” Davido was seen popping a bottle of champagne and taking a drink before spraying the champagne all over the room excitedly and beating his chest in the process.

According to some sources, it’s the first photo by an African artiste to hit a million likes on Instagram, though not confirmed. In late hours of Saturday, October 19, 2019, Davido announced via his Twitter that he was in the delivery room after a fan asked how far his album is. He tweeted: “I dey delivery room brother! Make we talk this matter after.”

Adeleke Jr. is Davido’s third child with three different women in four years. He has two daughters Aurora Imade and Hailey Veronica from two other women.

Several fellow artistes, including Casper Nyovest,  Mayorkun and YCee, as well as many of his fans and well-wishers have taken to social media to congratulate the couple on their new bundle of joy.

The singer has never hidden his love for Chioma whose relationship with became public after she celebrated her 23rd birthday in 2018. Davido and his Imo State fiancée are often seen on stage displaying affection. The music star went on to release a song titled “Assurance” and gave her a Porsche car valued at N35 million. The hit song “Assurance” was dedicated to Chioma, and she also starred in the music video as well. Also in the video for the song “Wonder Woman”, Davido closed visuals with Chioma, after showing images of his two other women.

A few months ago, the singer did cause a stir answering a question during a radio interview when asked about his girlfriend Chioma, in comparison to the other two women shortly before he proposed to her. Responding to the question, the star singer said, “this one is special to me”. Just last month, Davido formally proposed to Chioma at a dinner held at a restaurant in London.

The engagement came 10 days after the couple’s family had an introduction ceremony in Chioma’s family home in Lagos. Their wedding is set to take place in 2020, and pop star Chris Brown according to Davido requested to be a participant in the ceremony as he and Davido have developed a friendship after collaborating on “Blow My Mind,” Davido’s latest single.