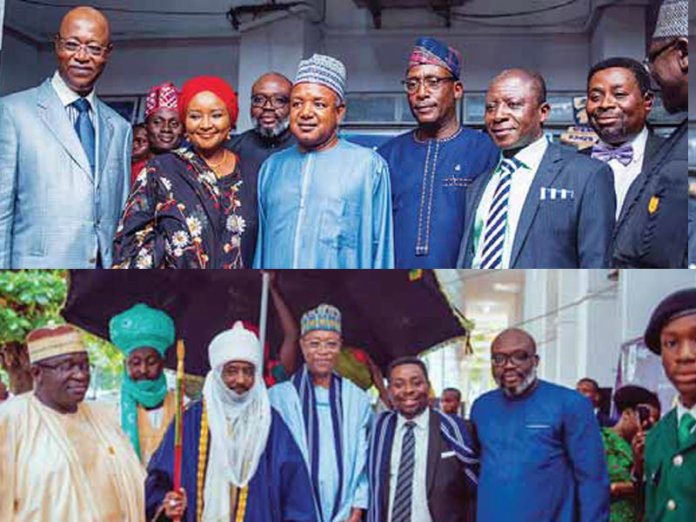 For over 100 years, Kings College Lagos has kept to its promise of turning young minds to nation builders as evidenced when its old boys association recently paraded an array of dignitaries and major players in the nation’s economy during its 110th year Founder’s Day Lecture, MARY NNAH writes

According to history, Kings College, Lagos, a boys only secondary school was established by an Act of British Parliament on September 20, 1909. The college, originally called Kings School, Lagos, opened with 10 scholars. It was established to churn out students of profound character and academic distinction – men who would build an independent Nigeria.

Being a national institution and the nation’s numero uno in post primary education, today, Kings College, Lagos, remains the best in terms of prestige, character formation, discipline and academic excellence.

As a foremost Nigerian college, promoting unity in diversity and nurturing globally competitive and chivalrous gentlemen, worthy in character and learning, the institution since inception has maintained its mission and mandate to nurture youth of diverse background into men of profound character and academic distinction, through teaching, mentoring, best practices and fear of God, for the greatness of the country and global community.

So, recently, to mark its 110th year of breeding national leaders and nation builders, the Kings College Old Boys’ Association (KCOBA) organised the Founder’s Day Lecture held at the school premises in Lagos.

In attendance at the lecture were prominent Nigerians and old boys of the school, including the Emir of Kano, Alhaji Mohammadu Sanusi II; Dr Olorogun Sonny Kuku and Governor of Ekiti State, Dr. Kayode Fayemi, among others.

Speaking on the significance of this year’s anniversary celebration and what informed the theme of the anniversary lecture, titled, “The Founding of the Kings College Lagos as a Template for Government Involvement in Education”, the Chairman 2019 King’s Week Planning Committee, Mr. Ladi Lawanson said it was glaring that the standard of education is falling and the quality of preparation for the leaders of tomorrow is less than what is desired.

“If you look at Nigeria today, I think all of us can agree that the standard of education; the standard of instructions and the quality of preparation for the leaders of tomorrow is less than we all desire.

“That’s why we thought that as an association – stakeholders in the education sector and beneficiaries of an educational system that once worked, we have a duty to effect positive changes by speaking on such issues and invite people that have understanding on such and are able to influence the outcome and bring about solutions”, he said

“This year makes Kings College 110 years old. As institutions grow all over the world, most institutions die off as soon as they take off; they loss relevance and stop performing the roles for which they were created but the good news about Kings College is that it has kept true to its mandate for the last 110 years of it existence”.

Lawanson explained further that the objective of setting up Kings College up was to mould young minds into becoming nation builders, adding that from the array of its old students, the school has indeed kept that promise.

“For example, the Emir of Kano, Alhaji Mohammadu Sanusi II, before becoming the Emir of Kano, he was an accomplished banker who rose through the ranks till when he was the governor of Central Bank before he became the Emir of Kano; the Chairman of the day, Dr Olorogun Sonny Kuku, is a co-founder and Chief Medical Director of Eko Hospitals Limited, an accomplished physician of no mean repute and also a captain of industry; our current KCOBA president, Alhaji Kashim Ibrahim-Imam, who is also a celebrated politician in Nigeria, has done so well, and I could go on and on, so Kings College has kept true to its objectives for setting up.
“You can see the handshake across generations of old boys, we always engage and interact with old boys, mentor them, inspire them with what we are doing and challenge them to try and do better. For example during this celebration, we dedicated a day to the filming of the movie, “Nibe”, which spoke to the challenges that people face today about drug abuse and juvenile delinquency. So all these offerings is to make them aware of the world around them and to make them understand that society expect much from them and that the network that we have with them is enough as a support base for them even while they are going through these challenges”, he added.

On what informed the choice of Ekiti State Governor, Dr. Kayode Fayemi as guest speaker for this year’s anniversary, he said, “No one can knock his scholastic prowess and he is a man who has got pedigree”.

In his opening speech, President, KCOBA, Alhaji Kashim Ibrahim-Imam described the college as an institution which has been around for a 110 years, moulding leaders for the nation across generations.

“The reason for Kings College being created was stated clearly in the protocols that proceeded the founding of the college. The objective was to raise leaders that would administer Nigeria. From its founding on 1909 till date, Kings College has continued to deliver on this mandate”, Ibrahim-Imam said.

He however lamented that at a time like this in the nation, when there were so many challenges, and the standard of education was deteriorating, there was urgent need for stakeholders in the education sector to look inwards and have a conversation around what has gone wrong and also come forward with solutions to turn things around for good.

The KCOBA president informed that the tumbling education system was responsible for the theme of the lecture marking the school’s 110th founder’s day celebration.

Describing Fayemi as an accomplished scholar in his right, the KCOBA president said that apart from being an exemplary scholar, Fayemi has also paid his dues in terms of activism, adding, “He is a very active and successful politician and a bona fide role model across the nation”.

And old boy and patron of KCOBA, Dr Olorogun Sonny Kuku also expressed his view on the pedigree of the longstanding institution.
“We are all very proud to be Kings College old boys. And this country could not have been what it is today without Kings College. We have observed for a long time that anybody who is somebody in our society today came from Kings College,” Kuku said.

Emphasising that the school has maintained its standard over the years, Emir of Kano, Alhaji Mohammadu Sanusi, another old boy, said, “All of us who passed through Kings College know that no matter how you came into the school, you have to meet up with the standard of Kings College. If you sat for exam and failed, you would repeat and if you fail again, you would be expelled. At Kings College, no matter who you are, you are not above the law.”

Stressing further, the Emir said Kings College has maintained the standard it started off with, adding, “even if people came into Kings College based on the sense of entitlement, by the time they leave the college, they should be able to stand up on their own and be ready to compete on merit with anyone”.

“So, when you come out of Kings College, from the university to your place of work to politics, please remember that you are special”, the royal father noted further.

Fayemi who was inducted as an honourary member of KCOBA by the Emir, in his keynoted addressed titled, “The Promise of Kings College and the Development of Nigeria: Stakeholders in Partnership with Government for Better outcomes in the Education sector”, eulogised the college, especially for producing leaders who are contributing to national development.

He called on stakeholders to work together to re-invent the days when the nation’s education system produced men and women who are truly worthy in character and learning.

“It is possible for the Kings College community to show leadership by leading the country back to the path of meritocracy, where your admission is solely a function of your performance in an entrance examination ranked amongst your peers.

“We must bring back the days that every common citizen could access such institutions as Kings College without knowing anybody. If you don’t qualify to enter a school, simply apply to the next available school. While the promotion of the federal quota system is not out of place for a diversified country as Nigeria, merit should not be sacrificed on the altar of such arrangements”, he said.

While urging stakeholders to examine the role of the school in national development, Fayemi said government at all levels must build more schools to cater for the rising number of students and curb overloading existing schools beyond their capacity.
The governor said the current challenges facing the nation’s education sector must be surmounted now in order to provide the “required solutions for Nigeria’s development in all ramifications – generation after generation”.

He said further that government, school authorities and other stakeholders must be proactive and strategise in order to reposition the nation’s education system.