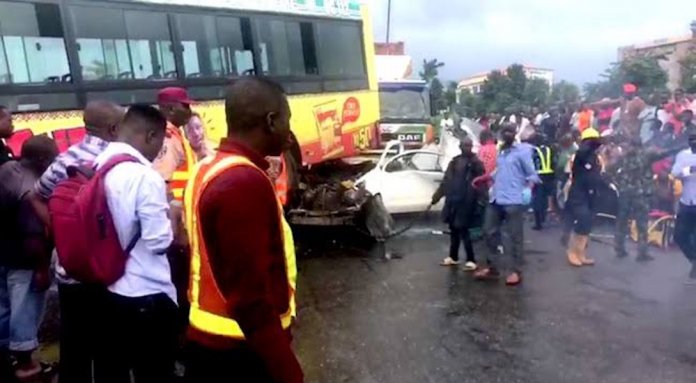 At least two persons were killed and several others injured in multiple accidents involving 10 vehicles on Otedola Bridge along Lagos-Ibadan expressway on Wednesday.

According to eyewitness accounts, the accident was caused by the driver of the LAGBUS, who was said to have been driving recklessly when he swerved and rammed into the white pick up van.

With the impact of the crash, other drivers that were also on speed rammed their vehicles into the high capacity bus, the truck and the van.

Although they did not rule out over speeding, others however blamed the accident on the sloppy nature of the road by Otedola Bridge, coupled with the heavy rainfall which affected visibility of motorists.

Because of the number of motorists involved, emergency responders swung into action and brought out the corpses of two persons and rescued those who sustained varying degree of injuries.

Hours after the accident, the entire area grounded to a halt despite concerted efforts by emergency responders to control traffic by directing motorists through alternative routes while clearing the accident scene .

It was also gathered that the Lagos State Traffic Management Authority (LASTMA) operatives who were on ground to control traffic helped to take the injured persons to various hospitals for treatment.

In a series of tweets, LASTMA advised motorists to take alternative routes to their destinations while emergency officials rescued the victims.
As at press time, all vehicles involved in this accident were finally removed off the road except the containerised truck, thus still ensuring that the road remains cordoned.

Their fears are not unfounded given that

Otedola bridge rather has become notorious for fatal accidents, especially in recent times.