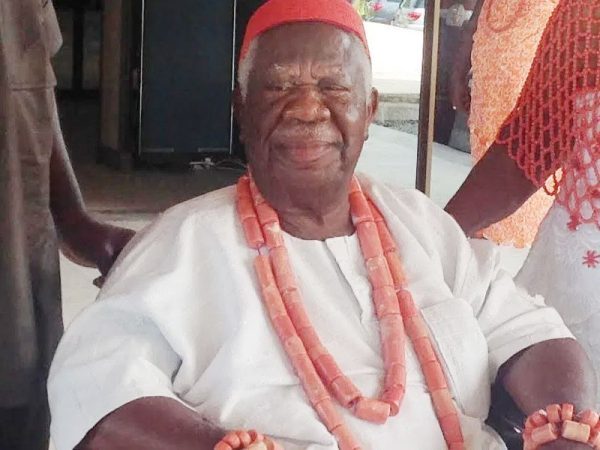 His Royal Majesty Ifechukwude Chukuka Okonjo II yesterday received his official staff of office from the Delta State Government as the 13th monarch of the ancient kingdom of Ogwashi-Uku in Aniocha South Local Government Area of the state.

The state Deputy Governor, Kingsley Otuaro, presented the staff of office to the new king at the Obi Palace ground in Ogwashi-Uku, with a charge to brace up to the challenge of stepping into the big shoes of his father, late Obi Benjamin Chukuka Okonjo I, by being resourceful and a unifying factor to his people.

Otuaro equally sued for the cooperation and support of the people for their new king as well as walking closely with him on his chosen path of peace, unity and prosperity in the land.

He observed that Ifechukwude was being presented the special instrument of office as he was duly selected by the Ogwashi-Uku kingmakers as the new monarch in line with the custom and tradition of the kingdom, and warned that the state government would “not tolerate the illegal occupation of any traditional stool in the state.”

Otuaro, who presented the youthful traditional ruler with his symbol of office at exactly 11.45a.m., urged him to be fair and just in his dealings with his people because he remains the father to all as well as the custodian of the culture and tradition of Ogwashi-Uku.

The deputy governor, however, charged the people to continue to support the Governor Ifeanyi Okowa administration, which he noted has shown commitment to filling the various development gaps in all parts of the state since inception.

While responding, Obi Ifechukwude Okonjo pledged to constitute himself into a bridge builder and purposeful agent for the rapid economic and socio-cultural transformation of Ogwashi-Uku kingdom in line with tradition vis-a-vis contemporary developmental trends.

He said he was fully aware of the enormity of the task ahead especially in the light of the dearth of critical infrastructure across the land, division among the people and the educational and unemployment gaps among the youths.

While thanking the state Governor, Okowa, for his immense support and encouragement, the new monarch said: “I receive this instrument of office on behalf of my great people, and I pledge to do my best to strengthen the bonds, bind the wounds and join hands with all progressive groups and elements to further the interests of Ogwashi-Uku.’’

He assured the youths that they would have a voice during his reign, and promised to embark on programmes that would impact positively on their lives as he is relatively young enough himself to feel their pulse and appreciate their yearnings.

The traditional ruler pledged his readiness to work with local and international developmental agencies as well as individuals to fast-track the process contained in his blueprint for opening and consolidating on opportunities for growth and development in the community.

Okonjo, who promised to set up, without delay, a reconciliation body to address the internal and external contentious forces undermining the unity of Ogwashi-Uku people, also promised to construct a Cultural Centre for Ogwashi-Uku within the first year of his reign as Obi.

The new Obi of Ogwashi-Uku, who was formally installed as a king on September 13, 2019, is the third son of the late Obi Prof. Okonjo, and a younger brother of former Nigerian Finance and Economic Minister, Dr. Ngozi Okonjo-Iweala.