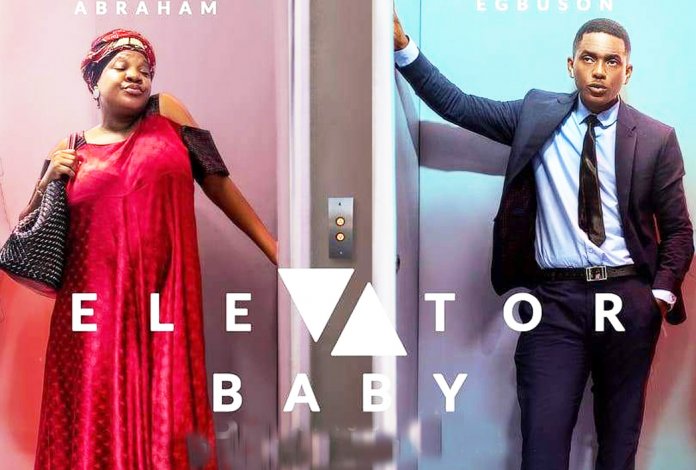 A  few months ago, there was the notification that Nollywood star Toyin Abraham and fast rising actor Timini Egbuson would be starring in Niyi Akinmolayan’s movie, . The feature film, which has now started showing in cinemas, follows the success of Akinmolayan’s August release, The Set Up. But this time in collaboration with FilmOne Productions, the Elevator Baby is a dramatic-thriller.

The movie also stars Shaffy Bello, Yemi Solade, Sambasa Nzeribe, Emem Ufot, Broda Shaggy, and a host of other actors. Elevator Baby tells the story of Dare Williams (Timini Egbuson), a privileged young man with a fiery temper, who got stuck in an elevator with a semi-literate pregnant woman, Abigail Kuforiji (Toyin Abraham). The situation would force the expectant local woman into labour. And the bad tempered Dare is left with no choice but to try and save both mother and child in the lift.

As he attempts what follows was confusion as the experience brings him face to face with his inner demons. Toyin Abraham screaming in a couple of scenes in the elevator, followed by Timini Egbuson’s riposte makes for even more hilarious scenes as she urges for relieve: “I’m not putting my hands into this woman’s… no, no, no way!” Timini yells. And both acts intensify screams. Elevator Baby pictures the often-awkward Nigerian tale of how people leading different lives interact with one another.

This is particularly exciting; noting that in the movie, the paths of a privileged young man crosses that of a semi-literate woman, with the former needing to help the latter in a matter of life and death. Such a dynamic is suspenseful, and would require some level of humility from a rich and hot-tempered figure. Interesting thing about the Elevator Baby is that Toyin Abraham was actually seven months pregnant while shooting this movie so the pregnancy is very real.

The producer Niyi Akinmolayan would reveal in a post he shared shortly after Toyin’s delivery preceding the movie release. “This woman @toyin_abraham is one of the most amazing people I have ever met in my life. We knew we wanted her for the #elevatorbaby role but I wasn’t even sure she would be available and be willing to work with a new young director. But I liked her previous stuff so I reached out and shared the idea.

“Now this was the fun part. She called me immediately and said…’uncle Niyi…who told you?’ I said who told me what…she said ‘don’t lie who told you?’ I thought maybe I had messed things up and started apologising. Next she said…’wait…so you don’t know I’m actually about seven months pregnant.’ I was silent for a while. I didn’t know what to say.

Eventually I said… wow…oh wow. This could go either ways. We can go with the flow or she can totally turn us down. I didn’t know what to say. Next thing she said was, ‘this is how the Lord works I will do it’. I was both scared and excited, so I promised we would keep it a big secret and only post the teaser after she had announced her baby.

“We got a nurse and a standby vehicle on set throughout and her husband @kolawoleajeyemi was so fantastic in helping her during the film (great guy). Toyin was such a delight to work with. She gave everything to make the pregnant character work. And when I mean everything I mean slams, falls and all. We were the ones worried even @_timini was concerned. She on the other hand was just having fun. Strong woman. She’s definitely on my top list of actors to always work with. Congratulations once again Toyin from the Elevator Baby crew. Our baby is finally here.”

Toyin Abraham(Toyin Aimakhu) is a household name in the Nigerian movie industry. Her acting prowess has seen her drop memorable scenes most often she hits the screens. Known for her particular ability to portray the emotions of the not-so-learned Nigerian (like in the Alakada Series, amongst many others), it would be intriguing how she replicates this ability and experience as she portrays a similar role in this movie.

Timini, brother to star actress Dakore Akande (popularly Dakore Egbuson), is playing a lead role in this movie. Starring in the Shuga TV series, Tinsel series, Isoken amongst others, many have dubbed him one of Nigeria’s “next rated” stars. It would be a joy to watch just how fully he morphs into a superstar and roles such as these would definitely on his budding success story, moving forward.