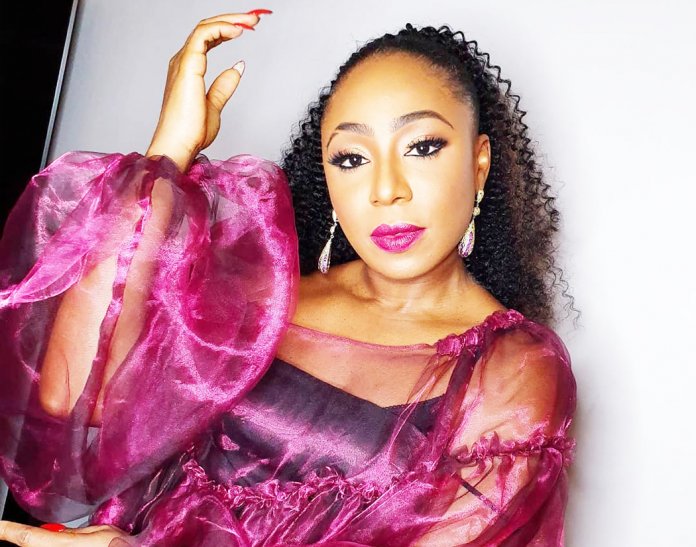 Nollywood star and musician, Dakore Egbuson was 41 on Tuesday. She grabbed headlines on blogs and social spheres with her simple makeover in photos shared to mark her day, writes Ferdinand Ekechukwu

The name Dakore Egbuson sure rings a bell to those who have been around before and after her career success a few years back. So also her name and status changed following her marriage to her longtime love and billionaire’s son, Olumide Akande, making her “Dakore Egbuson-Akande”. A “gypsy” and as always, happy go woman and mother, the actress has had reasons to celebrate whether for her career, family, friends, life and love. Her intimate birthday soiree which had her friends and family in attendance last year left memories far more than pictures could tell.

And it’s so interesting to see her revel, as always. The superstar actress and musician was a year older last Tuesday. Wishing herself a happy birthday, she wrote. “It’s my birthday yo! Glory be to God in the highest for preserving me and mine, Woyingi Mbana, Eledumare Ese, Chineke Daalu, Ubangiji Nagode. Thank you my Awesome #Dakorefam for holding me up, rocking with me…you guys are the real MVP’s truly! I appreciate you all. My friends, colleagues, family, management, God bless each and every one of you! Nothing can stop me I’m all the way to up! #October14th to all my birthday mates let’s celebrate God’s goodness!” With this, Dakore grabbed headlines on blogs and social spheres.

Dakore has been known for grabbing headlines for the good reasons. If it’s not her winning prowess in film/stage, it could then either be her multi talent as a singer and actor or her humanitarian commitments. The ultimate of it was for something a little more personal: when her four-and-a-half year old romance with her beau walked to the aisle. How did that happen? “We just connected intellectually and we have a lot in common, too,” Dakore says of the initial attraction. “He really loves music as I do; and he knows those little things that make me relaxed around him. We have each other’s back, which is really great because that is usually the foundation of a good marriage.”

Dakore’s marriage was well celebrated in the media and with magazine interviews and pictures, so much so it was obvious to see that both were in love. She has been able to keep the spark in her marriage since then by the special grace of God. “It sounds like a cliché but truly, that is what it takes. You can’t be in a marriage without God,” she enthused. Adding that they were both Christians, and went for counseling in church in the areas where they had to work harder like communication for instance. Plus a great support network in the family.

That it’s been the grace of God and the love that have been between them and now, the love have become even more expanded having two daughters. The God factor is all to her both in and outside her quiet moments and motivation. But she does get inspired even in her noisy ones. She said: “I think it’s just to be able to identify the beauty in everything that’s around me. It might just be a sunset or a bird flying in the sky at the perfect time, a song on the radio, or I could be in an art gallery or I could be at a concert, even at my kids’ school, I just try to receive inspiration from everything that’s around me. I also meditate and pray a lot. I’m not religious, I’m spiritual and I’ve been on this path for a while.

“I grew up in the church so I have a very Christian foundation but I’m also open to other forms of worship and I don’t discriminate against anyone with their religious beliefs. I’ve actually studied other religions like Buddhism and Islam, even African traditional religion being that it’s my root as an African, I take it all in because at the end of the day, we may call God different names but He’s the same creator. I believe in karma and sewing good seeds, I believe in using my art for good. These are the things I believe in and I receive lot of inspiration for doing those things. I’ve been a Yoga practitioner for about 15 years and I think that also really helps me get centered and focused and helps me heal myself from within.”

Around the time she got married, rumours were rife that she was going to stop acting and it came as a surprise to many when she returned to the scene. That is the downside of being in the public eye to her; that people just create all sorts of stories. “I am not doing anything without the approval of my family or my husband’s family. Nobody ever told me to stop acting. It just happened that way, I didn’t plan it. Life just sometimes takes over. Up until that time, I was all about my career but then I met someone who I fell in love with and that changed my whole life.

“I had to give more time to my relationship to make sure I nurtured it away from the public eye as much as I could. I took an inadvertent break to focus on my relationship. Being a career woman is great and I was lucky to have some success at it. But at the end of the day, family and having a stable, happy home is more important to me and I knew that something would have to give. At that time, it was my career that had to give.”

Dakore has featured in more than 50 films, some of which includes Caught in The Middle, Emotional Cry, Silent Tears, 11 Days and 11 Nights, Peace of Flesh, Emotional Crack, Shattered Illusion and her comeback movie, Journey to Self (2013).

And then her recent films: Fifty, (2015) Isoken (2015), Chief Daddy (2018), and New Money (2019). Her earliest acting memory would be on stage when she was in primary school… “I played the recorder to sheet music and represented my school at recitals. So I think definitely my first memories of acting would be during my childhood, from the age of five. I was doing a lot of music and music theatre and plays.  I was a very artistic child. I loved to play dress-up and listen to music. Music, film and television were and still are my passions. It definitely was a welcome development at school and I was very prominent in the arts side of things.

“I thrived at academics especially English but I really shone in the arts, I even went as far as winning the prize for best in music in primary five. Performing was definitely a big part of my childhood. I went to Corona Primary school, one of the oldest private primary schools in Nigeria.”

At this stage of her professional career and accomplishments in the context of her current commitments, Dakore is actually beginning to wear the producer hat and have been for a while now. She’s currently working on her first feature film.

The kind of stories she wanted to be part of were stories of the underdogs, people who never really got a chance to let their voices be heard. “So it just made sense and I said ‘if this is really what it is then I would love the opportunity to be able to support those causes and allow those hidden things to be brought to light.’ I was always drawn to humanitarian work and a year later, in November of 2005, I got approached by a friend of mine, a respected film lover and critic, who told me that Amnesty International or Oxfam America were trying to reach me and that was how we got talking.

“I visited Oxfam America‘s office in Senegal and that became my journey. That particular project was about the control of arms and ammunition to make sure that guns and other light weapons were not put in the wrong hands.

“That was the beginning of my journey with international organisations. I’ve gone on to work with the United Nations on girl child education and gender based violence. . . Those are the things that draw me to projects. My fame definitely helps to create a buzz and to get my fans excited because at the end of the day I’m not making the films for myself, I’m making them for people to see and hopefully appreciate.”