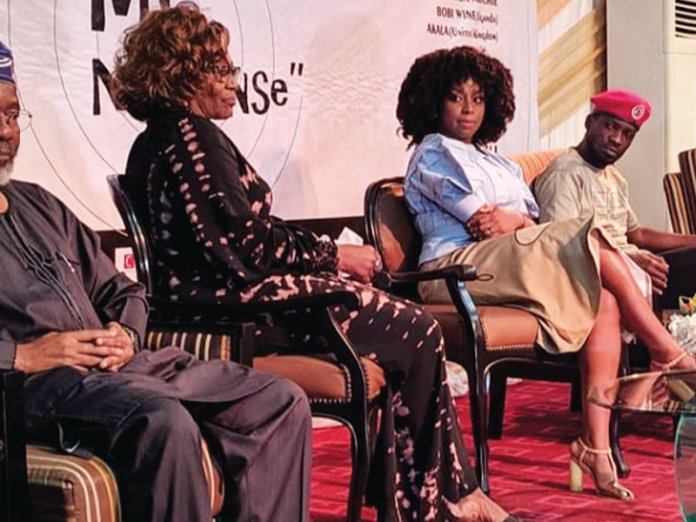 It was his first time in Nigeria but the Ugandan singer-cum-activist Bobi Wine has amassed quite a number of fans here. When he was first introduced by the host at the Fela Debates — the annual symposium that kicks off the week-long festivity of Felabration — the NECA Event Hall where the event held erupted in cheers.

By the time he finished his presentation on the topic ‘Teacher Don’t Teach Me Nonsense’, the applause reached almost a deafening crescendo. It didn’t end there, human rights activist Femi Falana lauded him more and told him that there are young Nigerians who are as fearless like him, fighting for the people.

His statement hinted at the founder of Sahara Reporter Omoyele Sowore, who was detained for attempting to lead a revolutionary protest.

The symposium is one of the rare places where the activist born Robert can make public speeches. In his country, he would have been arrested or tortured. His music is not played in public places and he is not allowed to make public appearances.

Wine’s visible sin is that he dared to challenge the Ugandan government. He dared to request for a change that will better the lives of the poor masses. Prior to his arrival in the country, he escaped a house arrest by soldiers who were ordered to prevent his planned concert from holding.

Defying all odds, he still left the cold winds of Uganda for the erratic weather of Lagos state.

Wine however didn’t come to bore the rarefied gathering of intellectuals and artistes with his acts of bravura which was clearly visible in the signature red beret that he donned. The beret in recent times has drawn the ire of the Ugandan government such that they labelled the head gear a military outfit and barred civilians from wearing it. His message was to urge African artistes to follow the footsteps of the Afrobeat legend Fela Anikulapo-Kuti who used his music to fight for the freedom and justice of the people.

“I probably would have come to Nigeria as an artiste or an activist for any other reason but to see that we are here to celebrate a man that touched me personally and I believe touched thousands if not millions of Africans is a great thing.”

Wine didn’t grow up listening to Fela or watching his videos. He was introduced to the Afrobeat legend through a friend. Through the magical hands of technology and history, he was able to learn about Fela and his message of justice for the people. His songs he said gave him the courage to challenge the autocratic government in Uganda through his People Power Movement. His songs are politically charged just like Fela’s, urging the masses to reject dictatorship.

“When I became an artiste, my desire like any other artiste was to sing about fancy things. So my music started out as a confidence in the ghetto, singing about parties and pretty girls. And as we grew up, I personally noticed that we are teachers and influencers. I noticed that so many young men are influenced by the fancy life and alcohol and many other things.

“It came to a time where corporate companies were even paying us to pose with their drinks because that was the kind of influence we had on the youths. So if I pose with a brand, they were sure that the generation would follow in our steps. We were teachers, teaching our generation nonsense. It’s either by mistake or deliberate that artists or activists attain to teach what is not beneficiary to the status quo.”

It was only a decade ago when he took the conscious step to change the direction of his music. He started by singing about social issues, the behavioural change and guiding youths against the HIV/AIDS epidemic.

“Slowly I found the need to talk about leadership. There is one interview I read where the great Chinua Achebe was asked what the problem of Nigeria is and he said the problem of Nigeria is not the people but the leadership. It got into me and I probed deeper into the leadership that we were having and indeed that answer was alive and continues to be alive where I come from in particular.

“We started talking about leadership and challenging the leadership, talking about things that matter. I have been discussing with my friends back home and here that Fela is the man that lived before his time. I wish we had a Fela today or many other Felas. This is a guy that lived when there was no social media, no internet, a time where it was easy to silence a critical voice like Fela. Only God knows the beatings that he took or how many times he was incarcerated but ultimately he stood and spoke for what believed in.”

Wine urged African artistes, mostly Nigerian to emulate the footsteps of the legend. “You realise that sometimes out of fear or out of ignorance and many times deliberate for us as teachers to be teaching nonsense. However, it is important for not just artistes from other parts of Africa but also in Nigeria today to make sure that they are not teachers continually teaching nonsense.

“We know that our people listen to us as artistes, some pay to listen to us, it is a big blessing. It has been widely reported that Africans have not impressed with the culture of not reading to the level we should. We have been ridiculed many times but again nobody can say that African art have not been effective enough.

“It is my hope and desire that the would-be Felas of this generation continue the belief that the great Fela had. We are celebrating a man who did not use his music to sing about parties but to criticize those that hold the power on our behalf.

“My fellow artistes to remember that they have an incomparable power in their hands and in their mouths to send messages out there and continue with the cause that was started by our fathers and inspiration like Fela or Bob Marley.

“Fela did not mince his words, we know it is challenging to criticize the status quo and very rewarding to hobnob with them but again for those among us who doubt if it is possible, we have an example that lived in the same place that we live today and his name was Fela. May we tap into his greatness, may his spirit which I believe as an African man is still alive among us guide us.”

Wine’s words were echoed by other members of the panel which included Prof. Akin Oyebode who described Fela as an indestructible avatar that used his music to educate the masses and showed how African values are eroded Nigerian author Sefi Atta who moderated the panel advised that artistes should not contradict the messages of Fela with commercialism.

She argued that the custodians of his works should also protect his messages as many are using them for their personal gain. British journalist and artist Akala urged Africans to not limit their knowledge to what they were told, rather, carry out research to get a robust understanding particularly of their history.

Celebrated author Chimamanda Adichie on the other hand emphasised the need to teach young ones our history, calling for an overhaul of the educational curriculum.

The week-long celebration which kicked off on Monday will reach a climax on Sunday, October 20, with musical performances. The festivity is taking place simultaneously at New Afrika Shrine in Ikeja and Freedom Park in Lagos Island.