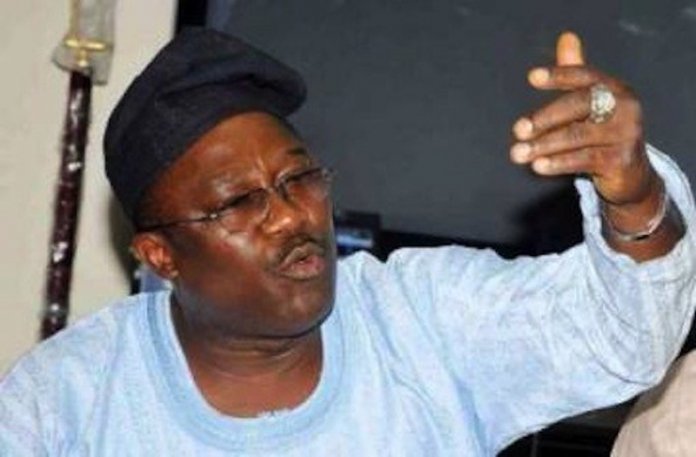 One day after the court ordered a fresh contest in Kogi West senatorial contest, Senator Adeyemi who represented that district in the 6th and 7th senate sat in the courtyard of his home in Maitama, Abuja. It was late in the night, but his phone buzzed ceaselessly, most times bearing messages from persons who rejoiced with him for being given another chance to test his popularity.

Adeyemi has been in the spotlight lately. Apart from the legal battle to redress an alleged wrong in the 2019 National Assembly poll, which he has won both at the trial and appellate courts, he was appointed Director General for the campaign to return Governor Yahaya Bello for a second term in office.

Taking the job was not a surprise to many who recall how Adeyemi has laid his political life on the line to redeem Bello. In the days leading to selection process of an All Progressives Congress (APC) governorship candidate for Kogi State, Adeyemi had openly stated his preference for Bello, saying that he will work against the party if Bello was not given the governorship ticket. It was a threat that was not taken lightly, knowing the kind of influence he commands in his senatorial district. But cynics snickered at him, mainly because he was previously in the opposition Peoples Democratic Party (PDP). The prevailing sentiment at that time was that he could not be trusted.

For a long time, Adeyemi waited and worked hard to demonstrate his loyalty both to the party and the governor. He noticed that Bello was being painted black and scandalized, but there was not much he could do. He acknowledged that in a democracy, “you can say anything you want to say as long as you are not defamed,” but he discarded much of what was said about Bello as lies.

“I discovered that all that has been written about him were not true, and generally when people talk from the angle of their opinion, which they are entitled to, you don’t need to fight them,” Adeyemi said in an interview with this reporter. “Whatever you say will have to be investigated. When you know that what they are saying is not true you don’t bother much.”

“I have read about the killer squads. I mean how will he sponsor a killer squad to kill the people he’s governing, that’s how weak the opposition are. You don’t break a clay pot with an AK47.”

While defending his principal of allegations of sponsoring violence against opponents, this comment also exposes Adeyemi’s dislike of the opposition. He thinks a series of activities, particularly by the PDP have become potentially damaging liability to their party’s campaign, and therefore, the APC and Bello are going to have a walk over in the governorship contest.

The PDP candidate in the Kogi governorship contest, Dr. Musa Wada is a blood brother of a former governor of the state. He is also married to the daughter of another former governor of the state. Adeyemi sees this as a huge strategic error on the part of the PDP, in an environment where the different ethnic groups and senatorial districts that constitute Kogi State have a burning aspiration to have one of their own occupy Luggard House, the official residence of the governor.

This is partly the reason for Adeyemi’s insistence that Bello, who hails from the Kogi Central senatorial district should return as governor. Previous civilian governors of the state have been from the Kogi East senatorial district. His calculation is that if Wada becomes governor he may likely remain in office for eight years, whereas his people in Kogi West, who have never had the privilege of having representation at that level are willing to support Bello’s quest for a second term in the hope that he will pave way for a candidate from Kogi West senatorial district to succeed him in 2023.

Adeyemi who recently won the battle to dislodge Senator Dino Melaye from the senate and have another election acknowledged that he was wrongly declared the loser in the earlier election, “the unfortunate thing is that Nigeria has been so embedded with corruption that it’s assumed everybody is corrupt and when try to do what is right, you will stand alone and you start asking yourself if you’re normal, that’s why people like Dino could become a senator in Nigeria. In many nations of the world before you come to the upper chamber, you must have an antecedent. What’s your background? You must have excelled in your career, but today boys from the street who never worked anywhere are the people you see representing us. Dino doesn’t have a record of service anywhere or excelled in any chosen career. But this is a society where anything goes. People of questionable character occupy positions. It’s really unfortunate.”

Adeyemi, 59, said he wasn’t rejected by his people, in the February 2019 National Assembly election. He blamed himself for playing politics by the book. “I felt that we should obey the law, and in this country when you want to be honest, people want you to look foolish. Some people are inherently dubious. How do explain a situation where an aspirant goes to the court before the election and demanded that collation should be done at the senatorial headquarters.

After the election, while we were winning with over 30,000 votes, we now went to meet at the headquarters which was the order given by the federal high court that Dino Melaye went to, he was the one that sort the judgment, it was handed over to him with INEC. Will anybody go against a decision in federal high court? In Nigeria, anything is possible. While we were waiting, they took the back route stopped in a bush and changed the results; went to Lokoja and announced.”

A former President of the Nigeria Union of Journalists, Adeyemi is happy that Governor Yahaya Bello gave him the job of being his chief strategist in the coming 2019 governorship election in Kogi State. Coming at a time when he is warming up for another senatorial contest, he is taking everything in his stride and going full steam ahead.

*Dino has never won any election, it’s all manipulations. But the judiciary has further reinstated our hope and that it’s the last hope of the masses. There’s no basis for comparison between me and Dino, if INEC conducts election again, I will beat him arms down

*Musa Wada is not yet a candidate until the court cases are done with. PDP primary was inconclusive, therefore, PDP has no candidate

*The primary responsibility of any government is first and foremost, the protection of lives and property. You will not dispute the fact he fought insecurity to a standstill

*My advice to Alhaji Atiku Abubakar is that he should not waste his time and money. It is too late. I wish he did that six months ago. The crises rocking the Kogi PDP are fundamental. They are without planning, they are without focus and people have made up their minds in Kogi State

*How can you present the son-in-law of a former governor who is also the younger brother of another former governor. Even if you are picking someone from the same zone, are there not other very competent persons from the zone?

*We are not afraid to go for a rerun because the people can assess the two personalities. They know our antecedents, they know our track records, they know who we are and what we stand for

Adeyemi affirming that he is better than his opponent in Kogi West senatorial contest, Senator Dino Melaye

* Kogi state is one of the largest states in Nigeria. Kogi state landmass and population is far more than about eight or nine states put together. So there are many challenges that this government is facing, but be that as it may, I am of the view that he has performed far better than previous administrations that I was somehow involved

*Governor Yahaya Bello will win the general governorship elections in the same manner he won the primary. Winning elections is not an internet affairs but acceptability by the people based on convictions by stakeholders across the political entity. Governor Bello is a man of covenant with God, such people will not be confronted by men with mere wisdom. Winning the November poll has become simpler with the governor holding the flag of the party in view of his sterling, first-term performance

*Other senatorial districts have ruled Kogi State for two terms. Now a brother from Kogi central, who has done very well in his first tenure; should also be given another opportunity. If Gov. Bello is given the opportunity to lead us for another four years, I am convinced that we in the West will rule Kogi State. I am using this medium to beg our party leaders not to make the mistake of allowing one to change a winning team in Kogi State. Those who say APC cannot win Kogi under Bello are not God, because he is covenant child. If Governor Bello is denied the APC ticket, some of us might be forced to work against the party

*Therefore, in the light of the sincerity and commitment of President Buhari, his strength of character and support of eminent personalities such as Chief Olusegun Obasanjo, Asiwaju Bola Tinubu, and the support of the leadership of the ruling party towards the reconstruction of the socio-economic fabric of our nation, we have decided to defect to the APC

Adeyemi explaining why he defected from the PDP to the APC

*We are mindful of the harsh economic situation in the country due to global economic recession and poor planning in the past. However, this administration must be supported to succeed because the determination and sincerity to balance the books and balance the economy must not fail. My conscience bears me witness that I am convinced that this administration means well for Nigerians. It is honest and focused towards building a viable economy. For us to fuly recover economically, we must stop the importation of food that we can grow at home

Adeyemi stating his commitment to the administration of President Muhammadu Buhari