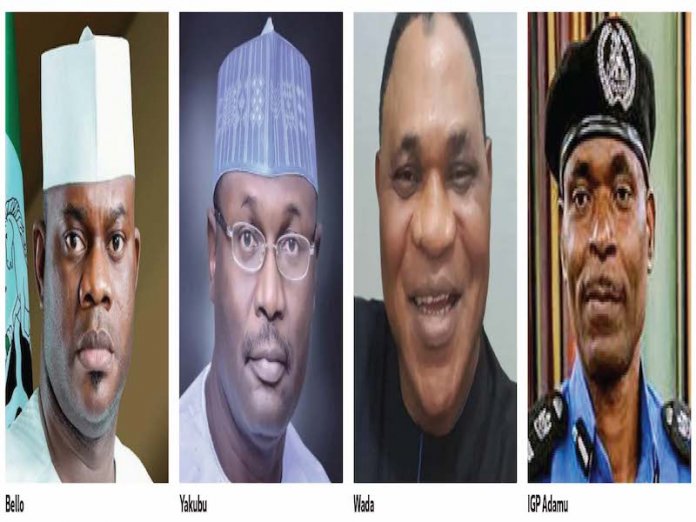 Ibrahim Oyewale writes that many stakeholders have expressed fears over possible breakdown of law and order before, during and after the November 16 governorship election in Kogi State

Ahead of the November 16 gubernatorial election in Kogi State, critical stakeholders have continued to express concern over imminent political upheaval that may characterise the election process in view of the early warning signs in the build-up to election day.

Kogi State has always been referred to as one of the flash points during the previous elections based on various electoral violence that hitherto recorded in two senatorial districts of the Cokonfluence State, particularly in Okene, headquarters of Kogi central senatorial district in 2007 and political skirmishes recorded during the last general election in Kogi East, in such places as Ayingba, Ejule, Idah to mention a few.

To this end ,the state government and other security agencies have pledged to be on top of security situation for the November gubernatorial election to be conducted under peaceful atmosphere. The security agencies pledged their determination to secure life and property before, during and after election in the state.

Be this as it may, there will be deployment of security personnel from Abuja to fortify the security architecture of the state as a measure to prevent violence before, during and after election.

At a public function recently in Lokoja , the the Resident Electoral Commissioner, James Apam expressed fears over the possible break down of law and order before, during and after election, calling on the relevant stakeholders to play the game by its rule to avoid violence.

Apam disclosed his worries on the November governorship election in the state centred on violence. While speaking at the Unveiling/Multi Stakeholders Consultative Meeting On Curbing Violence Against Women in Politics , VAWIP, which took place in Lokoja

The Resident Electoral Commission (REC) noted that it was sad that some hoodlums storm polling stations and disrupt the elections. He stressed that all efforts put in place by INEC to organise free, fair, credible election was always jeopardized by some people and that these constitute a setback to the process. He called on parents to educate their wards against violence and see how the November governorship election can be free and fair.

“INEC is doing everything possible to organise a free, fair and credible governorship election in November, we have met with traditional rulers and other stakeholders in the state on the way forward.

“People always blame INEC when there is a problem, but the truth of the matter is that in most cases, the electorate and politicians are responsible for the problem. On our part, we normally encounter some problems but I can assure you that some of these problems will be solved before, during and after Kogi governorship election.”

Earlier, the Executive Director, Challenge Parenthood Initiative, Eunice Agbogun in a welcome address said the programme was organised as the state is getting set for the November governorship election, stressing that the coming election is critical and women should not be relegated to the background by men.

However, the Election Management Body, the Independent National Electoral Commission recently trained security personnel across the three senatorial districts with a view to curb possible electoral violence during the election in November.

The two – day training was organised for security personnel in Kogi State by the INEC in collaboration with European Centre for Electoral Support (ECES) in Okene the headquarters of Kogi Central Senatorial district, Idah in Kogi East and Lokoja in the Western Senatorial District respectively.

The facilitator, Mrs. Garba Sefia identified some of the factors both internal and external impacts on electoral security.

Garba who is also a certified trainer with INEC noted that Nigeria’s electoral environment has not been static since return to civil rule in 1999, adding that some changes that have taken place are positive, while others are not complimentary to the aspiration of Nigerians to conduct free and free and fair elections that can contribute to the consolidation of electoral democracy.

“On the other hand, high level of poverty, illiteracy, unemployment continue to pose threats to democratic elections in the country, adding that the first past system inherited from British colonial rule continues to engender cut throat competition in the electoral process.”

Against the backdrop of the imminent violence that may erupt before, during and after the November 16 governorship election in Kogi State, the Executive Director, Conscience for Human Rights and Conflict Resolution (CHRCR) Comrade Idris Miliki Abdul urged the security agencies to engage all political parties with a view to preventing violence during the forthcoming election.

In a statement issued to journalists in Lokoja, Miliki expressed worries over hate speech and character assassination that characterises the pre-election campaign in the state.

The activist explained that election is a competition that has different participants and different processes, as different political parties are billed to participate in the coming governorship election slated for November 16.

“Based on our early warning signs, assessment and analysis, it has been discovered and revealed that various political parties across board in Kogi state are involved in character assignation, inflammatory statements and unguarded utterances in their campaign. These, he said can trigger violence. It is worrisome that politicians are not telling the electorates what they intend to do, how they wants to do it, when they want to do it, so as to encourage public tracking.

“We are very worried that if these ugly trend is not check it can lead to monumental electoral crises as we move towards the November 16 governorship election. We call on the security agencies across board, to intensify efforts in engaging political parties, their supporters and all the candidates in this governorship election on the issue of unguarded and inflammatory statements.

“INEC should consistently engage relevant stakeholders and make available all electoral guidelines that can help to curb electoral violence in this crucial election. Every stakeholder should know that there is life after election.

In the same vein a governorship candidate on the platform of Change Advocacy Party (CAP), one of the registered political parties contesting the Kogi state November 16 governorship election has called on the Inspector General of Police (IGP) Mohammed Abubakar to order mopping up of arms in the state before commencement of the election.

Speaking with newsmen in Lokoja recently, Comrade Ismail Imam Umar noted with apprehension the rate at which guns are being distributed across the state in preparation for the governorship election. He alleged that “the All Progressives Congress (APC) in the state has embarked on campaign of arms distribution instead of convincing the electorate for their votes.”

He further alleged that in the last elections, armed thugs were used to intimidate voters and snatch ballot boxes at polling units which were taken to unknown locations and fictitious results presented at various collation centres.

The CAP candidate also said that the INEC ad-hoc staff were equally harassed and in some instances kidnapped along with the electoral materials. He therefore appealed to the Inspector General of Police and other heads of relevant security agencies to brace up and save the people of Kogi state from the impending onslaught that awaits them on the day of the election.

However, the CAP candidate said his party “is set for the election despite the intimidation, threats and use of power by the ruling party as we have grassroots support and connections. We are on a rescue mission to redeem the state from evil forces that have held the people of the state hostage for almost four years.

Reacting to the insinuation that the ruling All Progressive Congress will perpetrate violence to win November election, the Chief Press Secretary to the Governor, Muhammed Onogwu stated that everybody knows that the people of state are enjoying peace now than the period of PDP, stressing that the Governor Yahaya Bello will do everything to ensure security in the state.

He said that all allegations against the present administration were unfounded, based on falsehood and could classified as hate speech. He said that the government will not succumb to undue pressure from any group of persons or individuals.

Onogwu added that the people of Kogi state parted with PDP in 2015 as result of bad governance and insecurity. He said the state suffered during the years of PDP rule, while we can not stop them from crying because they have nothing to offer the people of the state. They have lost the people. They have lost their supporters. They are wailing, let me remind them that propaganda will not win an election. They should stop telling lies. They should try and tell the people of Kogi state the truth if they still have confidence. It is not by propaganda.

“It is on record that the this government came to correct all the iniquities of their administrations in the state. Kogi State used to be place where thuggery, armed robbery thrives. Now, talking on violence, in hjs inaugural speech, the PDP governorship candidate, Musa Wada immediately after primary said he would match violence with violence on election day.

“We are ready for the conduct of another peaceful election, no amount of their intimidation can stop people to cast their votes for APC. In the last three years of Governor Yahaya Bello, they have seen what it means to have good governance , they have seen what infrastructure means and they have seen what development means .The Allegation that the government wants to perpetrate violence is false. This is a figment of their imagination. The November 16 governorship election will be conducted under a free and fair atmosphere,” he said.

Based on early warning signs, assessment and analysis, it has been discovered that various political parties in Kogi state are involved in character assignation, inflammatory statements and unguarded utterances in their campaign and these can trigger violence