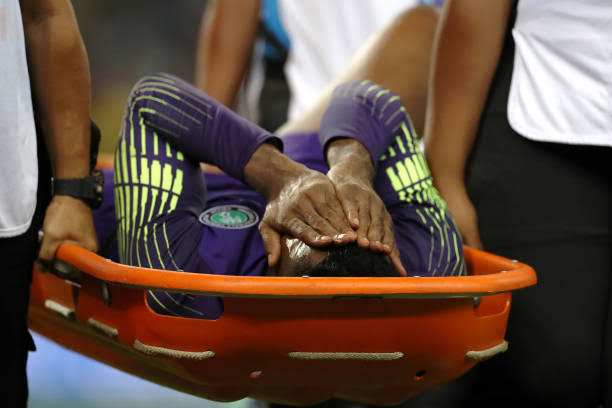 Uzoho, gave a five-star performance in the match in which he just won back the number one shirt since his AFCON 2019 cameo appearance in Egypt. He twisted his left leg in an attempt to save a rebound in the goal area but in the process injured himself and had to the substituted immediately.

Moments after the 1-1 draw in Singapore, the Media Officer of the team, Toyin Ibitoye, confirmed to THISDAY that the extend of the damage cannot be ascertained for now until after the scan which will take place at his club.

He praise the Super Eagles for putting up the brave fight against the Brazilians.

“The result was a good one for the team everyone is happy but we are not in the mood to celebrate because one of the players is down with a major injury and what we can offer now is the to give him moral support and hoping that the medical result would be okay,” Ibitoye said last night.

However most sports medicine experts feared  that the  Cyprus-based goalkeeper should expert a long period of stay in the sideline considering his height and the fact that injuries in the knee joint are mostly career threatening types..

Before he was pulled out in the 60th minute, he had made several saves that could have given the Brazilian victory and his substitute, Maduka Okoye, was in good shape too as he was to the rescue of the Super Eagles with close range efforts.

The departed the Asian island city-state  few hours after the game with the players flying back to their respective clubs.  Only home based Ikechukwu Ezenwa, backroom staff and few NFF officials led by Amaju Pinnick flew back to Nigeria.

In the match, it was a strong and competent performance by the Super Eagles who earned the  1-1 draw against the five-time world champions. Brazil in a prestige international friendly in Singapore yesterday night.

Both teams had started with good pace, passion and intensity at the Singapore National Stadium in Kallang and after only two minutes, Roberto Firmino’s turn and shot flew away from the Nigerian goal. Three minutes later, the three-time African champions waltzed their way into the Brazilian vital area but Victor Osimhen’s shot was palmed away by goalkeeper Ederson.

Brazil’s France –based forward Neymar was forced to quit the game after only 12 minutes, due to injury, but seven minutes later Marquinhos could have put Nigeria in front with a bizarre own goal after his attempt to clear Chukwueze’s pull-out went wrong.

Villarreal FC of Spain’s Chukwueze, a former Nigeria U17 World Cup winner, was a thorn in the flesh of the Selecao throughout, and created chances for Nigeria in the 20th and 24th minute but Osimhen was cut out by an alert Brazilian rear.

In the 28th minute, Nigeria goalkeeper Francis Uzoho showed excellent agility in cutting out a powerful header by the ubiquitous Gabriel Jesus. Two minutes later, Uzoho was again alert to foil a shot by Firmino, and then reacted faster than Philip Coutinho as the ball danced in the box.

In the 35th minute, Nigeria broke through again, this time mining gold. Joseph Ayodele-Aribo, who scored on his debut in the friendly against Ukraine in Dnipro last month, kept his cool and showed cleverness in taking a pass from Moses Simon and ghosting past Casemiro and Thiago Silva to shoot past Ederson for the opener.

The goal expectedly stung the Selecao into greater intensity and desperation, but they could have conceded again two minutes later only for Wilfred Ndidi to shoot directly at Ederson from a counter attack. In the 40th minute, stand –in captain William Ekong, who had a great game alongside central defence partner Semi Ajayi, cleared as Jesus lobbed into the Nigerian box, and four minutes later, a free kick by Coutinho whistled past Uzoho’s post though he had it well covered.

In the second half, the Selecao launched onslaught after onslaught, and equalized in the 48th minute as Casemiro reacted faster than the defence when the ball bounced off the crossbar from a Marquinhos header.

The South Americans then swarmed on the Nigeria rear to get more goals but found the Super Eagles super resilient, with Chidozie Awaziem, Jamilu Collins, Ndidi and goalscorer Aribo brilliantly complementing Ekong and Ajayi.