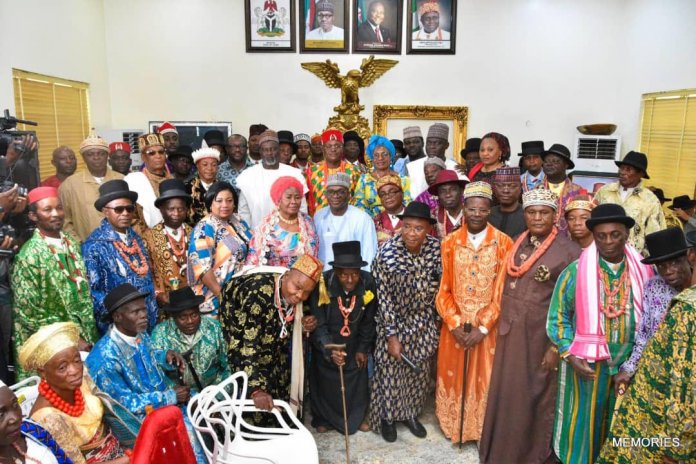 Mary Nnah writes that the paramount ruler of Okori, Egbere Emere Okori I of Eleme Kingdom, His Royal Highness, Appolus Chu’s quest for national unity recently got the backing of the federal government

For the Egbere Emere Okori, Eleme, Rivers State, HRH, (Dr) Appolus Chu, as Nigeria clocked 59 years of age, securing the peace, unity and safety of Nigeria is a task that must be carried out by everyone rather than the citizens just folding their hands and watch as the nation degenerates more and more.

For a while now, the campaign for unity and harmony in Nigeria has been a crusade carried out with passion by the Egbere Okori in various ways and in respective parts of the country. For some time now, Chu has been traversing the length and breadth of the country with the message of Nigeria’s indivisibility, the need for cultural integration, tolerance, peace and unity. He sees this as grounds that breed progress and national development

This crusade according to Chu, is part of the moves to strengthen cultural ties and peaceful coexistence amongst the different regions and ethnic groups in Nigeria.

Apart from organising various events in his community to achieve this, like hosting high class traditional rulers and other dignitaries across the country in his palace regularly, he has made it a tradition to travel from one part of Nigeria to another every now and then, trying to establish a crusade of oneness, a gesture he wants other traditional rulers to emulate.

These moves earned him the acknowledgment and admiration of the federation government when recently, the Deputy Speaker House of Representatives, Ahmed Idris Wase along with the Minister of Women Affairs & Social Development, Hellen Tallen, came calling at his palace leading a delegation of some federal government officials to pay homage to the monarch at his palace in Ogale Eleme of Rivers State. Their aim was to convey this message to the man they regard as a detribalised Nigerian, a patriot and nationalist.

The chiefs, men, women, elder and youths of Eleme were in attendance in their number to give a rousing welcome to the visitors.

The constant message that Chu has come to be known with is unity, peaceful coexistence and tolerance among traditional rulers and people of different ethnic groups in Nigeria for development to thrive.

As the entourage came visiting at his palace, his role as a bridge builder was extolled. They see his unity campaign, which he has being carrying round the country as a move that supports the three cardinal points of the present administration, which is security, fighting corruption and growing the economy.

While extending the appreciation of President Muhammadu Buhari to the royal father, the Minister of Women Affairs, Tallen, thanked His Royal Highness for his resilience and patriotic approach to issues of national interest.

“I am here to tell you that Mr President is pleased with your national advocacy for peace across the length and breadth of Nigeria and you have been identified as one of the few detribalised traditional rulers in this country.

“All your activities are carefully being followed and Mr President is quite impressed with your strides. You are one king that has moved from kingdom to kingdom, promoting peace amidst national unrest. Such men are rare and we have identified one in Eleme, which is why we have come to identity with you, extend Mr President’s warm regards and also appreciate your efforts so far”, Tallen noted.

Calling on traditional rulers across Nigeria to take a cue from the nature and attitude of the paramount ruler who has joined hands with the federal government in promoting peace and unity in the country, Tallen added, “we have come to show sincere appreciation for what you have been doing to ensure peace across the country. I call on all other royal fathers to do same so that we can support President Buhari to ensure that there is peace.”

The Honourable Minister also assured the women of Eleme of her support to ensure they are carried along in the scheme of activities at the federal level.

In his response, Chu thanked the federal government officials for the visit, describing their coming as timely.

“We are building bridges and strengthening national and international relationships that will benefit us. Your visit, more than anything, shows appreciation from the villa and that will make me do more for peace and unity of the country”, Chu said.

According to him, “this visit is a very timely one I must say; you came at a time when Eleme needed you most. We are a minority ethnic group with very little or no voice.”

Pointing  that no Eleme indigene is in the National Assembly, he urged the deputy speaker and the Women Affairs Minister to remember Eleme in the scheme of things at the federal level as adopted son and daughter of Okori Eleme.

“We don’t have a minister; we don’t have a chief of army staff or defence. We don’t have a federal lawmaker or anybody in the Federal Executive Council to stand and speak for us. You all know how strategic we are to the development of this country and we can’t afford to live like this. We give out a lot but get nothing.

“Look at the roads; do they look like the roads leading to a local government housing the first refinery, fertiliser plant, petrochemical companies, sea ports and so? No!

The bridge builder and peace ambassador further expressed his dismay over the lack of development in his kingdom despite its major contributions to national development. For the royal father, he wants nothing more than for his kingdom to be remembered by the present administration’s development plans.

Chu who always carries the needs of his people on his shoulders appealed to them to remember his community and factor them in, in the current administration’s development plan, especially as his community contributes immensely to the country’s Gross domestic product (GDP).

Responding to Chu’s appeal, the Deputy Speaker, Ahmed Idris Wase promised to pay attention to the plight of his people, adding that whatever was for the interest of the Eleme community will be taken up at the federal  level.

Wase described Chu as a detribalised Nigerian and nationalist whose advocacy for peace and unity, cultural integration and religious tolerance across the nation has been acknowledged and admired by the federal government.

Further describing Chu as a man who has won the heart of the president of the Federal Republic of Nigeria, President Muhammadu Buhari, following his advocacy for peace, ethnic unity and religious tolerance across the nation, the deputy speaker along with the delegation of top federal officials pledged to be a voice for Eleme people and ensure their plight is presented and duly addressed on the floor of House.

He assured the people of Eleme of his commitment to ensuring that Eleme land gets the desired attention from the federal government and what is due them, be allocated accordingly.

“I know you don’t have a lawmaker, I mean an Eleme man at the Senate and Reps but I want to assure you that from today henceforth, I am an adopted son of Eleme and I will ensure your voice is heard on the floor of the National Assembly” he said.