THE MENACE OF FIRE OUTBREAKS  29 mins ago 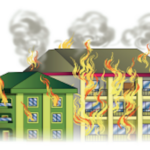 Inspiro Productions, in collaboration with The Lekki Coliseum (TLC), is set to stage a tribute concert on October 17, in honour of the legendary Afrobeat musician and pan-African, Fela Anikulapo Kuti. The concert which comes a few days after Fela’s posthumous birthday is the first of its kind for the jazz-loving community in Lekki as it features leading global artistes.

In a press statement issued by the CEO, Inspiro Productions and Founder, Lagos International Jazz Festival, Ayoola Sadare explained the rationale behind this tribute concert.

“Everyone has a Fela story. I grew up listening to the maestro as his music blared in private and public spaces. This tribute comes as a result of the impact his musical creation is making globally and the many fusions it has birthed. Afrobeat has given Nigerian music an identity, moving it from the general world music category to being in a genre of its own such as reggae and others. With music alongside activism, Fela ensured and shaped that. We use this concert to recognize that strongly,’’ he stated.

Nigerian artists billed to perform alongside these international bands include Seun Olota, Lufemi, De Funmi, YBNL, Princess Temmie Ovwasa, Poshryna, Muma Gee amongst others. Shadare is optimistic that this show which comes on the heels of FELABRATION will be well-received by the Lagos audience.

“Fela was for the poor and rich. The Lekki area and environs are yet to enjoy anything like this. Moreover, Lekki Coliseum is a one-stop luxury destination,’’ he said.