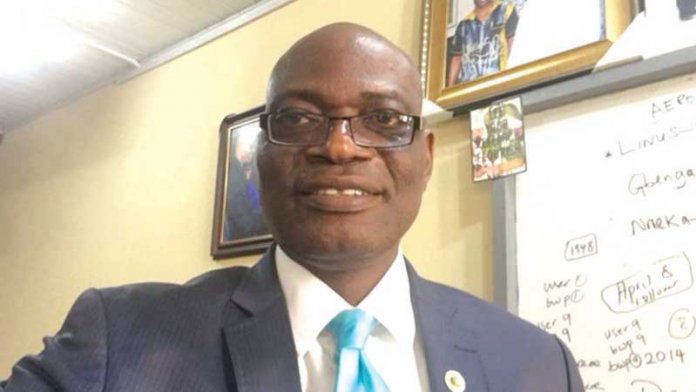 Almost two years after pledging to reposition the prestigious University of Lagos (UNILAG) to compete with any of its type in the world, the Vice-Chancellor, Professor Oluwatoyin Ogundipe, has reeled out his achievements, saying that the current storm in the citadel of higher learning would never make him lose focus.

Undeterred by the distraction caused by the lingering crisis, Ogundipe recently gave the account of his stewardship, which began on November 12, 2017, when he became the 12th vice-chancellor of the ‘university of first choice and pride of the nation’, as UNILAG terms itself.
According to him in a document x-raying his performance so far, “on November 12, 2017, I resumed as the 20th Vice-Chancellor of the University of Lagos. In the last 20 months, the management of the university under my watch has made some appreciable gains in repositioning the university as a first class 21st century university.”

In fulfilment of the promise that the university would focus on a six dimensional goals, Ogundipe said his administration had raised awareness about the need for faculty members to accelerate needs-driven research and attract more research grant to the university; established a total of 10 research centres on campus; inspired project award of over two million Euros for collaborative research amongst five institutions; attracted TETFund grants of various amounts won by faculty members; while over N2 billion was attracted as research grants by academic staff of the university in the period under review.

Moreover, he listed other achievements as donations of laboratory equipment worth N20 million and $400,000 admission of UNILAG to global epic, an international group of 21 institutions working to co-create and adopt world-changing solutions to cyber security all over the world; renovation of hostels and other projects; provision of more security equipment on campus; establishment of UNILAG TV, the first of its kind in Nigeria and attraction of about N349.2 million and $855,277 in training and capacity building to staff and students of the university, while moves are on to establish a modular refinery on campus, among others.

Indeed, to discerning observers, these are praiseworthy efforts of a focused administrator, who needs optimum cooperation to do more.
A crisis many believed started as mere accusations and counter-accusations between the Pro-Chancellor and Chairman, Governing Council of the university, Dr. Wale Babalakin (SAN) and the university management, led by Ogundipe has now created palpable tension in the institution in recent times, threatening academic activities. But, the vice-chancellor has insisted he would not allow the crisis to change his aim of taking the university to the next level during his tenure.

In fact, the local chapter of the Academic Staff Union of Universities (ASUU) and some other interests have joined the fray by throwing their hats into the ring in a battle with the pro-chancellor. It is now an issue of where you belong in the two camps on campus- the pro-chancellor’s and the vice-chancellor’s.

How it all started

The whole crisis had started with the accusation by Babalakin, a former Pro-Chancellor and Chairman, Governing Council, University of Maiduguri, that the UNILAG management was involved in financial recklessness to the chagrin of the council and had grossly abused the public procurement system in the award of the new university library project and other projects, resulting in huge financial losses. But the management pooh-poohed Babalakin’s accusations and counter-accused him of going beyond his mandate by taking over the day-to-day running of the university, running a one-man governing council and “showing arrogance, disdain and utter contempt for the university system,” allegations he vehemently denied.

With the interventions of the Federal Ministry of Education and the House of Representatives Committee on Public Procurement, the crisis was taken beyond the four walls of the university. Yet, it simmers on, making stakeholders to worry about the wider implications on its mandate as an institution for learning and research.

One of the causes of the crisis is the new university library under construction, part of which collapsed on February 14, 2019, following which the council constituted a panel, headed by Professor Peter Fogam to unearth the immediate and remote causes of the collapse.
The council accused the management of operating a weak procurement process, which it said contributed to the unexpected collapse of the building. But Ogundipe denied the allegation, saying that due process was followed in the award of the contract.

One of the mandates of the Fogam committee was to examine the procurement process that led to the award of the project to Messrs Dutum Engineering Limited. Although the committee said the award of the project to Dutum complied with due process, “especially those processes that relate to advertisement, setting the minimum qualifications to be met by bidders for the pre-qualification exercise, which were set out in the solicitation project”, it submitted that the Technical Evaluation Committee (TEC), which conducted the procurement exercise, “did not follow the evaluation process in very critical respect.”

While corroborating the Fogam Committee, the House Committee on Public Procurement in its observations/findings on the crisis, said of the Ogundipe-led management: “That there was compliance with the requirements of due process as contained in the Public Procurement Act and Regulations as evidenced by the ‘Certificate of no Objection’ issued by the Bureau of Public Procurement.”

Also, the council accused the management of inappropriately spending N112 million on the renovation of official quarters of principal officers of the university; N57 million on overseas trips; N750 million on contract splitting and N2.5 million monthly security grant, all unapproved expenditures.

This led to the council setting up a committee to look into the finances of the university following which Babalakin reportedly directed the university registrar/secretary to council to issue queries to the vice-chancellor and other people mentioned in the report of the committee.
Ogundipe however objected to the query and accused Babalakin of acting unilaterally, saying he did not follow due process by instructing the registrar (a junior officer) to issue him a query.

Nonetheless, the vice-chancellor dismissed the misappropriation of funds allegations, saying that all the university accounts had been migrated to the Treasury Single Account (TSA) of the federal government. He said the university accounts are audited annually by auditors approved by the Babalakin-led council.
The House Committee, in its report, also said it could not establish “any evidence of malfeasance or financial misappropriation by the management of the university.”
It however advised the management to “take proactive and immediate steps to improve its internal control mechanism and systems.”

The crisis reached boiling point with the recent reported dispatch of armed bouncers around the Senate Building during council meetings, Ogundipe and UNILAG ASUU accused Babalakin of wanting to take over the day-to-day running of the university, an allegation he denied by counter-accusing the university management of launching “proven massive attack and blackmail” against him.
While also denying the pro-chancellor’s accusation, they said his attempt to take over the administration of the university was at variance with the act establishing it.

ASUU said Babalakin violated extant law on the recent appointment of the University Librarian and the selection of Professor Dele Olowokudejo as a distinguished professor of the university. In a letter to the Federal Ministry of Education dated May 2, 2019 and titled ‘Dr. Bolanle Olawale Babalakin’s Authoritarian and Reckless Disregard for Rules, Regulations and Procedures in the University of Lagos”, the union said: “The pro-chancellor has shown disrespect, disdain and utter contempt for the Nigerian university system. This is evident in his public utterances, behaviour and actions.”

Why peace must return

In order for peace to return to UNILAG so that academic and research works can continue to flourish, concerned stakeholders, including parents, staff and students, as well as the House of Representatives appealed to the warring parties to shield their swords.
A lecturer, who craved anonymity, said, “this is necessary to allow the vice-chancellor take the university to the next level, as he had promised when he was appointed that the school would focus on six dimensional goals, which will make us number one in Nigeria and the fourth in Africa by 2022.

“We believe in him and we are supporting him to achieve this. Ogundipe has started so well because looking at his account of stewardship, which he renders regularly, you will see that he is a serious administrator. The least thing he and the entire management need now is any distraction. The governing council should cooperate with this man to deliver on his promises instead of these frivolous bickering that does nobody any good. Honestly, we have never had things this bad here.”

The House Committee in its report, in which it said although the composition of the governing council was lopsided and not in tandem with the principle of federal character, as there are no representatives from the south-east, south-south and north-central on the council, also advised its members and the university management “to cooperate with one another and work together for the progress of the university.”

It added: “The vice-chancellor is the chief accounting officer of the university, which is in line with Section 20 of the Public Procurement Act 2007 and should continue to discharge this responsibility as expected by law, while the governing council sticks to their supervisory role of policy formulation and funds generation for the university. The council should not meddle in the internal affairs of the university.”