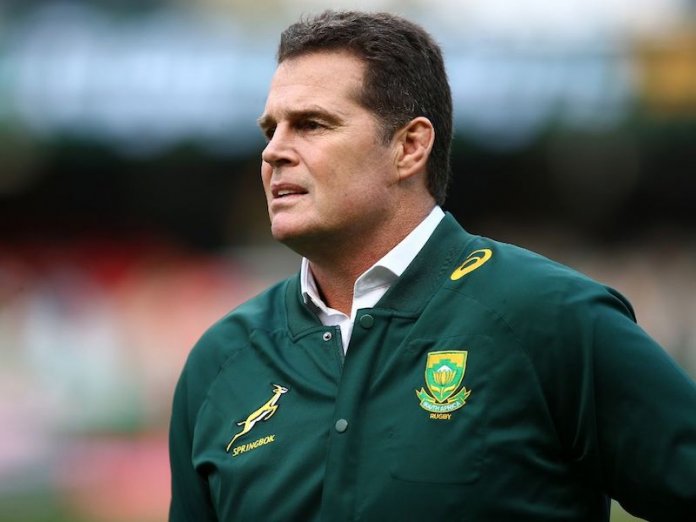 South Africa coach Rassie Erasmus has warned his much-changed side against letting up in their final Pool B match against Canada.

The Springboks will seal their place in the quarter-finals with a bonus-point win, barring Italy pulling off a huge upset in their last game against New Zealand, and Erasmus has made 13 changes after Friday’s 49-3 win against Italy.

‘One of the areas which will be vital going into the knockout stages is intensity and big moments, and the intensity at which quarter-final and semi-final rugby is being played,’ Erasmus told a press conference.

‘If this team doesn’t at least match that or step up, they will struggle to stay in team selection and make the team. They know that, and that will be one of the challenges.’

Springboks skipper Siya Kolisi and centre Damian De Allende are the only two players retained, with full-back Damian Willemse set to start just five days after arriving in Japan as an injury replacement for Jesse Kriel.

Two-time world champions South Africa bounced back from their opening 23-13 defeat to New Zealand by thrashing Namibia 57-3 before running in seven tries against the Italians.

Canada have conceded 111 points in their first two Pool B games after 48-7 and 63-0 losses to Italy and New Zealand respectively.

The Canucks have made six changes following their rout by the All Blacks last Wednesday and assistant coach Huw Wiltshire is under no illusions as to the size of his side’s task.

‘Playing the All Blacks and the Springboks in one week is a challenge,’ Wiltshire told a press conference.

‘I’ve done that with Wales and I know, from personal experience, it takes a toll on the players.

‘Two things you can’t defend against in rugby and that’s speed and power, and both those countries have got it across their teams, across the park and across their whole squads.’

South Africa-born wing DTH Van Der Merwe, Canada’s all-time leading try scorer, will line up against the country of his birth at the Kobe Misaki Stadium.