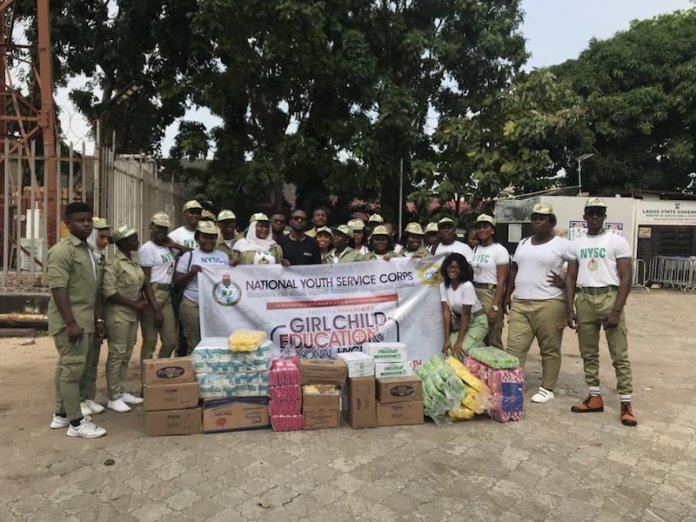 Chiamaka Ozulumba writes that to give back to the society, some youth corps members serving in Apapa LGA, Lagos, through their Community Development Service, recently embarked on a sensitisation of teenagers about rape, child abuse and molestation, as well as personal hygiene with emphasis on the girl-child

With emphasis on the girl-child, some youth corp members of the Social Welfare and Education Group under Apapa Local Government Area (LGA), through its Community Development Service Initiative, recently embarked on the ‘Fearless and Speak-out’ campaign, which is sensitisation of teenagers about rape, child abuse and molestation, as well as ‘Give the Girl-child a Pad’, which tackles personal and menstrual hygiene.

The group in collaboration with the Apapa Local Government Council, Rehdors Logistics Solution Limited, Matsept Global Logistics and Blue Anchor Agency embarked on the sensitisation and educative program on rape, child abuse and molestation and personal hygiene with emphasis on the girl-child in secondary schools within the Apapa community.

Menstrual hygiene management (MHM), as captured by United Nations Children’s Fund, (UNICEF) and World Health Organisation (WHO) is the comprehensive access to safe and healthy sanitary pad, adequate information, preparation, and support with which to manage menstruation in a healthy, safe, and dignified manner. Its absence can cause infertility, amongst other diseases in the reproductive system of in women.

Globally, poor MHM has been a grave challenge and Nigeria is no exception. The United Nations Educational, Scientific and Cultural Organisation (UNESCO), report estimates that one in ten girls in Sub-Saharan Africa misses school during their menstrual cycle, beyond this, gap in MHM has been recognised as one of the impeding factors to social and economic empowerment and growth.

In Nigeria, in addition to the taboos and myths surrounding menstruation, MHM issues confronting women and girls as include low availability of hygienic sanitary towels, high cost of disposal pads, poor knowledge of menstrual hygiene management and insufficient access to safe and private sanitation services, availability and adequacy of water.

It was to stem their findings that most girls in secondary schools make use of unhygienic and unsanitary products during their monthly flow, that buoyed the team to kick start a laudable project tagged “Give the Girl Child a Pad” through its Community Development Service Initiative.

While the female students were taught the ideal ways of properly placing, handling and disposal of their sanitary materials to avoid contaminating their environment, their male counterparts were not left out in both schools visited as personal hygiene packs containing hand sanitisers, deodorants, soaps, toothbrushes, tooth paste were distributed to them in both schools.

The group sought to reach 300 students in each school and made that feat achievable through donations in cash and kind made by notable companies like Rehdors Logistics Solution Limited, Matsept Global Logistics and Blue Anchor Agency who pledged their continuous support for projects of this nature

Speaking with THISDAY, Tosin Sangobowale the outgoing president of the CDS group said “We were looking for a way to give back to the society and members of the committee came up with the notion that we do a project on the girl-child particularly on the issues of personal hygiene, rape and non-usage of sanitary materials during their menstruation and we unanimously decided to focus on the girls in secondary school after findings revealed that four in every 10 girls within the ages of eight to eighteen were using tissues, torn clothes, foams and other unsanitary materials in place of sanitary pads.”

When the group got to United Christian Junior Secondary School, Liverpool it was discovered that female students mainly in the junior section had little or no idea of what “sanitary pads” were and when asked why, the issue of poverty came up. According to them, they don’t use sanitary pads, rather they make use of torn clothes, foams and other absorbable materials they deem worthy of use during their monthly flow.

This could be primarily attributed to the high price of sanitary pads, with Always ultra-pads selling at N450 for eight in a pack, Lady Care at N300 for a pack of eight, Virony for a pack of 30 going for N900. All these are out of the level of a young Nigerian girl-child whose parents are low-income earners, artisans, market women and men.

Miss Amaka (surname withheld) a J.S.S 2 student who started menstruating at age 10 spoke to THISDAY on why she does not make use of sanitary pads during her monthly flow.

She said: “When I started seeing my menses, my mother would cut pieces of her old Ankara material and give them to me in place of pads, which I will use but I have to keep changing it to avoid being stained. I am not always happy once I start menstruating because I have to limit my daily movement to prevent the pieces of cloth from falling, so I wear tights under my school uniform to prevent too much movement”.

Expressing her joy when she saw the cartons of sanitary pads the corp members unloaded from their buses, she told THISDAY “at least I will use pad this month”.

Another J.S.S 3 student, Miss Abimbola (surname withheld), told THISDAY that “I don’t use pads regularly. It all depends on my parents’ pockets, when there is little or no money, I have no choice but to use tissue which I have to use minimally to avoid my mother’s anger. I am very happy seeing all the gifts the corp members brought to our school.”

At Randle Senior Secondary School, Apapa students welcomed the corp members with songs of joy when they saw all the “goodies”. Afterwards, boys and girls were divided into classes and the sensitisation on rape, peer pressure, personal hygiene and menstruation took place as staff and teachers of the respective schools applauded the effort made by the corp members in taking care of their “younger ones”.

​The male students were coached on various defence mechanisms to make use of in case they feel threatened. The issue of rape was a delicate topic as the girls voiced out their fears, and they were told to be “Fearless and Speak-out”. They were urged not be silent even when they are threatened or abused as there are laws put in place to safeguard them irrespective of whatever the perpetrator tells them. Stressing that fear kills faster, the corp members said it is the major tool being used to oppress and make their voices not heard.

On the issue of sensitisation against rape Sangobowale said: “Our mission is to inform, educate these high-risk kids from being timid, silent and the need to speak-out as there is tremendous need particularly in the cases of children from low income neighbourhoods, slums and ghettos on being sensitised on this problems and in turn giving them a platform to report cases due to findings that reveal, four in every 10 girls within the ages eight to 18 years are at risks of becoming victims of these encroaching problems in Apapa LGA.

“There is a constant daily struggle for girls in secondary schools in their academic progress and social development as well as the adverse effects that stem from the stigma borne by victims of such abusive conditions and the damage done to their mental health which inadvertently leads to cases of depression which further increases the odds of suicide among them.”